"Beginning in 2022, we will institute 360-degree feedback for leaders, on a pilot basis." 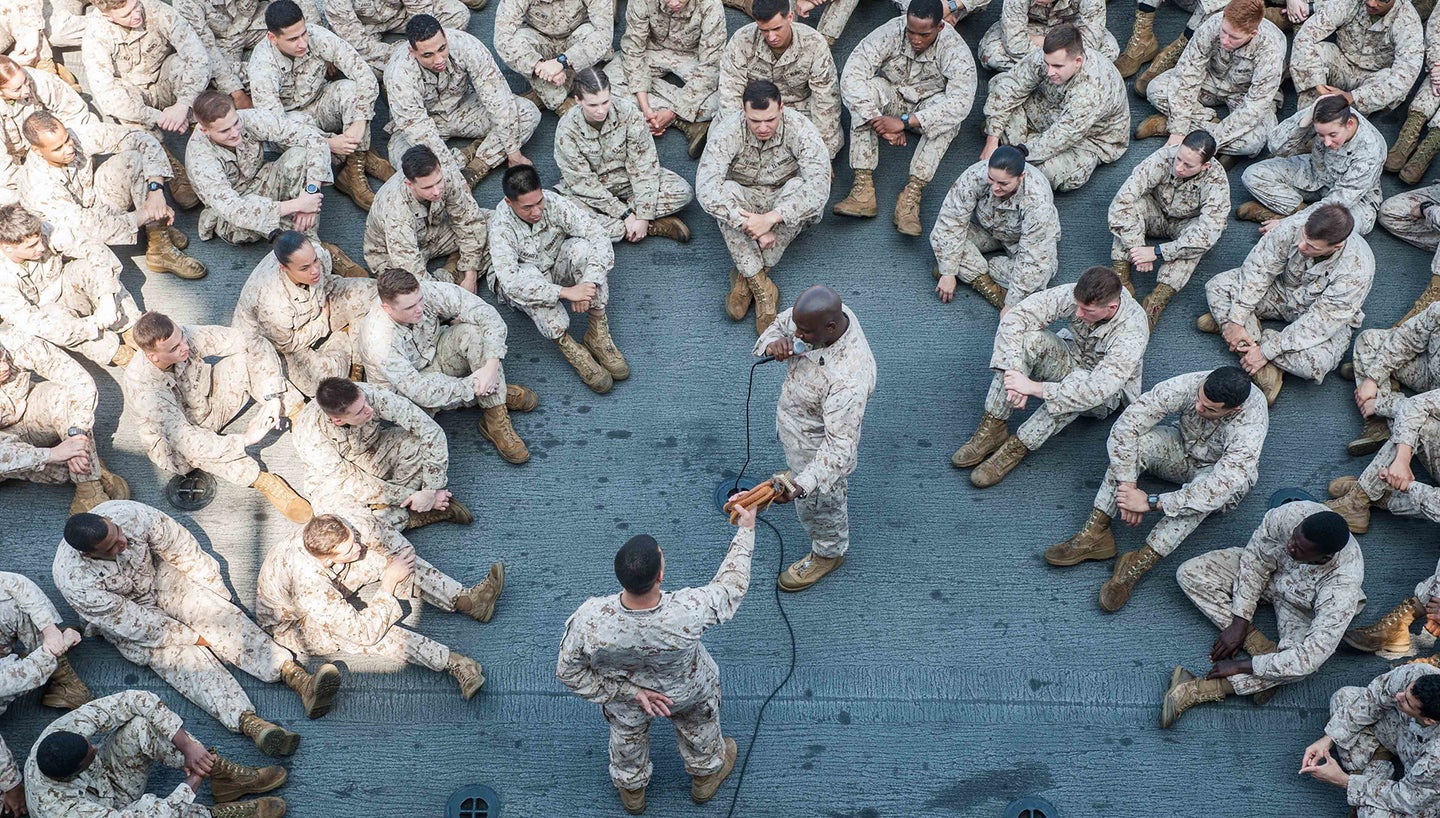 A sergeant major hands an honorary bull whip to a Marine during an all hands call on the flight deck of the amphibious assault ship USS America (U.S. Navy photo by Mass Communication Specialist 2nd Class Alexander A. Ventura II/Released).
SHARE

Junior Marines could help determine whether officers and senior enlisted leaders are selected for promotion as part of the Marine Corps’ efforts to revamp its evaluation process.

Marine Corps Commandant Gen. David Berger is calling for promotion boards to incorporate “360-degree feedback” into their decisions about which leaders will be selected to advance to the next rank.

Berger’s direction on using 360-degree feedback is part of his Talent Management plan, which was released on Nov. 3. The plan also requires the Marine Corps to retain more first-term Marines and creates the possibility that civilians with critical skills could bypass boot camp to join the service.

Currently, promotion boards largely base those decisions on Marines’ fitness reports, which only include notes on their performance from two of their supervisors, Berger wrote. In some cases, those supervisors do not serve in the same location as the Marines they are evaluating or don’t interact with them often.

“[Three hundred and sixty]-degree feedback, by contrast, includes the perspectives of a larger number of seniors, peers, and juniors and can include unflattering feedback that is prohibited from inclusion in a Marine’s FITREP,” Berger wrote.

This type of evaluation is already in use elsewhere in the Defense Department and it has shown to be effective in “identifying traits of toxic leadership” and helping to reduce the chances that toxic leaders will be promoted, according to Berger’s plan.

“Beginning in 2022, we will institute 360-degree feedback for leaders, on a pilot basis,” Berger wrote. “This feedback will be made available to the Marine and their reporting senior, with the aim of encouraging leadership growth. No later than 2024, we will incorporate 360-degree feedback into the selection board and assignments processes to ensure that this important input is properly considered by those selecting and assigning our future leaders.”

The Marine Corps has looked for lessons from business leaders as well as other military branches as it developed the pilot program for the 360-degree reviews, said Yvonne Reed-Carlock, a spokeswoman for Manpower and Reserve Affairs.

“The purpose of implementing 360-degree leadership reviews is to equip Marine leaders with real, honest feedback to identify their hidden strengths and unidentified weaknesses and to provide them with professional coaching to further develop and advance the capabilities of our force,” Reed-Carlock said. “To accomplish this, the pilot will solicit input from a Marine’s seniors, peers and subordinates to fully inform the picture provided to the Marine.”

The pilot program early next year is expected to include about 200 people to fine-tune the questions leaders are asked and to make sure that the right type of feedback is collected, said Lt. Col. Jim Armstrong, who works for the Marine Corps’ Manpower Management Division.

The Marines taking part in the pilot program will be field grade officers – majors, lieutenant colonels, and colonels – as well as senior enlisted leaders such as master sergeants and sergeants major, said Armstrong, who serves as the operations officer for the officer assignments branch.

Based on the pilot program’s results, Marines at other ranks and leadership positions could also receive 360-degree feedback, Armstrong said.

A 360-degree evaluation system is meant to prevent the promotion of senior leaders who may later be deemed unfit to command, such as one colonel who asked a former captain if she had been drinking before she was raped rather than referring her to trained staff for help. More robust performance evaluations may have also identified a brigadier general as a toxic leader before his subordinates reported him to the Department of Defense Inspector General’s Office, which determined that he had “disparaged, bullied, humiliated them, and devalued women.”

For years, proponents have been calling for the Marine Corps to adopt a 360-degree evaluation system, but other military branches such as the Navy and the Air Force have used this type of feedback sparingly and for certain leaders and civilian executives.

After the Fiscal 2014 National Defense Authorization Act required the defense secretary to look into using this sort of feedback in evaluations, a study from the RAND Corporation recommended against doing so.

Many of the people whom RAND interviewed for the study, including experts within the Department of Defense, said they did not feel that 360-degree feedback was the best tool to combat toxic leadership, especially in cases where toxic leaders had no desire to change their ways.

“Participants again pointed to other ways of finding these people that would be much more cost-effective (such as through anonymous reporting channels, climate surveys, informal discussion, or inspector general complaints),” the study says.

While federal agencies have used 360-degree feedback as part of coaching and mentoring, the government as a whole – including the Defense Department – has been reluctant to include this type of feedback for promotions, said Katie Kuzminski, a senior fellow and director of the Military, Veterans, and Society Program at the Center for a New American Security think tank in Washington, D.C.

“There was a fear that if the [360-degree feedback] were used for promotions or true evaluations as opposed to personal development that there could be some challenges with that – particularly if your peers in your unit are also your competition: There would be a way to skew the outcomes to make yourself look good by making someone else look bad,” Kuzminski said.

Berger is going much further than the rest of the military by looking at how the Marine Corps can use this type of feedback for promotions, she said.

“I do think that if any service can take the lead on this front, I think it would be the Marine Corps,” Kuzminski said. “Just from a cultural perspective, I think the real value that they place on taking care of fleet really matters – and certainly for more senior positions, there’s this saying that you hear from senior folks: If you had a helicopter full of 10 general officers in the Marine Corps crash today, you would have equally high competitive talent remaining to replace them.”