"It's a great privilege to lead America's best, and we have a sacred obligation to get absolutely the best, most committed leaders that we have." 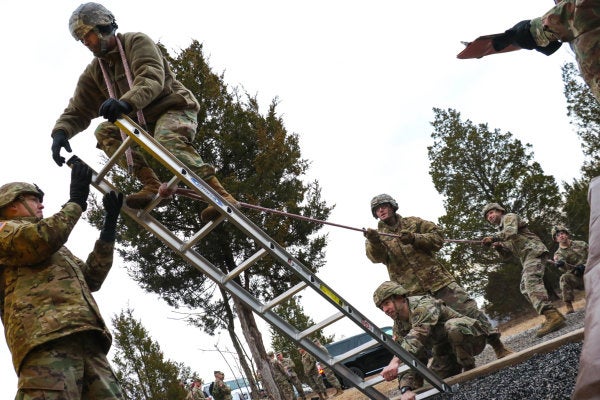 If you ask the Army chief, the new Battalion Commander Assessment Program (BCAP) is comparable to the National Football League Combine — and so far, things are going swimmingly.

“You have all different people coming in, where maybe you have a Heisman Trophy winner who's got a great history, and then you have someone coming from some state school that nobody's heard of,” Army Chief of Staff Gen. James McConville explained on Thursday in true New England sports fan fashion. “And they show up here, you know, as the scouts look at the Heisman Trophy winner, that person's credentials may be a little stronger.

“But when they get on the field here, and they go through the process, there's an evening out that happens. We know the knowledge and skills and behaviors that we want in our battalion commanders,” he added. “And they go through a rigorous process that demonstrates whether they have those or not.”

McConville and Maj. Gen. JP McGee, the head of the Army Talent Management Task Force, told reporters on Thursday that BCAP is allowing leadership to get a more “holistic” view of the around 800 lieutenant colonels and majors who were selected to go through the first implementation of the new program.

McConville, who has made talent management one of his top priorities since taking over as chief last fall, said that starting a new process was crucial because he views the battalion commander as “the most consequential position” in command.

“We want the absolute best leaders in place, because parents are going to send their sons and daughters to serve in the Army, and we want to make sure they are taken care of and treated with dignity and respect, and they have the opportunity to excel in the Army,” he said. “And that's a function of leadership.”

The first group of officers arrived for their five-day assessment on January 15th; the 18th and last group will arrive on Feb. 9th.

The assessment includes physical, cognitive, and non-cognitive testing. Officers go through a blind panel interview as well, sitting behind a screen and fielding questions from one major general, two brigadier generals, and two former brigade commanders. A sergeant major is also present, though their role is merely to advise the panel.

“They can neither see the person, nor see any identifying information about them,” McGee said on Thursday. “In that process, the panel members have to judge them on their verbal communication skills without any of the sort of cues you would have when you're actually looking at somebody.”

The officers are also psychologically evaluated; 35 operational psychologists — civilians or contractors with extensive assessment experience from the Army special operations community and who have degrees in that field — were brought in to help conduct interviews and determine who is and is not fit to take command.

“Their field of specialty, largely coming from the special operations community, is to run exactly what we're doing: operational assessments in terms of determining whether these are the right candidates, and they have the right skills matched to be able to put them into a position,” McGee said.

McGee added that while reports from subordinates or peers are considered during the process, it's “very apparent” when an officer genuinely may have a problem, or when there are one or two people who have “an axe to grind.” Overall, McGee said the “vast majority” of respondents have been positive about the officers going through BCAP.

At the end of the five-day program, the officers sit down for a 30-minute out-brief, during which they receive overall feedback from the assessment, including things that the panel noticed or would suggest to the officer to help them continue their own personal development.

The final list of officers who are chosen to take command in fiscal year 2021 (those going into battalion command positions this summer have already been decided) won't be released until later this spring. Those who aren't placed on the “primary list,” meaning the immediate group of officers who are fit to take command, will go onto an alternate list. Those officers could be pulled up to take command in the event that something comes up with the primary officer, such as an injury that prohibits them from continuing in that role.

Ultimately, the program is meant to catch concerns that potential leaders may have early on. As McConville explained, battalion commanders have a good chance at becoming colonels and moving up higher through the ranks. With the BCAP, Army leadership hopes to ensure that those rising into senior positions are the right ones for the job.

“From where I sit, command is a privilege,” McConville said. “It's a great privilege to lead America's best, and we have a sacred obligation to get absolutely the best, most committed leaders that we have in charge of these great Americans, who have raised their right hand to serve.”