"Spouses feel they are unable to advocate effectively for their families." 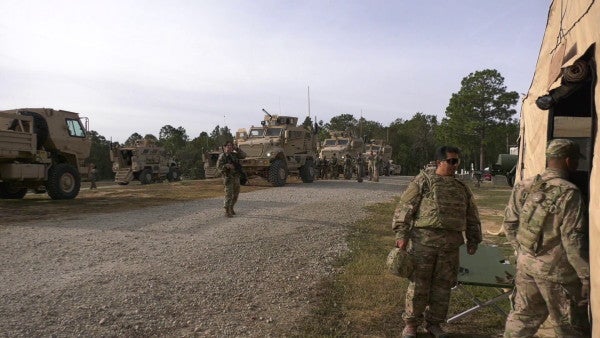 As the saying goes, you recruit the soldier, but you retain the family.

And according to internal documents obtained by Task & Purpose, the Army still has substantial work to do in addressing families' concerns.

In a document put together by an Army Transition Team (ATT) for the new Chief of Staff, Gen. James McConville, soldiers and their families gave an honest assessment of the problems they face — from housing, to health care, and the inability to advocate for themselves.

In one section under the title, “Theme: People Matter, but Families Do Not,” a comment says there are “unacceptable wait times” to get housing issues resolved, pointing specifically to one instance where there was a wait time of over three weeks to fix a gas line leak, and over four weeks for a roof leak “that resulted in gallons of water falling on a dependent's bed.”

Other housing complaints include families being “repatriated to mold/unsafe houses,” and that they are unable to withhold their BAH when concerns go unaddressed, or problems are ignored. Withholding BAH is a provision included in a Tenant Bill of Rights, which received support from the service secretaries earlier this year, but a group of housing companies have since come out to say they aren't so sure they like that idea.

Problems with privatized military housing are nothing new — the Army Inspector General outlined in depth the problems that soldiers and their families were facing, including intimidation from privatized companies, retribution for submitting multiple work orders, and feeling that the property managers “placed the interests of affiliate companies above life, health, and safety.”

The Army has already put in place a number of processes to help stymie the housing crisis, and said that many of the recommendations the IG made in its report are already underway, but it's not a problem that will be solved overnight — and families are clearly still suffering.

Army spouses have also reported struggling to get things done on their own, without their soldier spouse — something else that the ATT discussed in the internal document.

“Spouses feel they are unable to advocate effectively for their families,” the document says. “By being unable to advocate, spouses rely on their soldiers which puts stress on the soldier's professional life…which then increases stress in his or her personal life as a military family has to include an ever-growing circle of people into their family issues.”

The ATT adds that stress derived from increased operational tempo “is compounded by a perceived lack of empowerment by families/spouses to advocate for their families in the absence of their soldier.” Spouses told the ATT that they've been told to “come back with your soldier” when they tried to resolve things like financial and medical issues on their own.

One sergeant said he wanted to tell McConville that soldiers “are in need of time to take care of our families,” and that high OPTEMPO is “wearing out soldiers and causing families to become more dysfunctional.”

A staff sergeant said she's proud to serve, but she's ready to be done “because of the separation of my family.”

McConville has been very vocal about making people his number one priority; the ATT even says that he made it clear to them “that his first priority revolves around the caring for, and development of, the Army's people.”

“General McConville's top priority is people. As part of his preparation to serve as the Army's 40th Chief of Staff, his transition team solicited feedback from the Army, across all three components – the Active Duty, Army National Guard and the Army Reserves, to include Department of Army civilians and family members,” McConville's spokesperson Army Lt. Col. Curtis Kellogg told Task & Purpose.

“This feedback and the transition team's analysis, helped shape the priorities and quality of life initiatives Gen. McConville has undertaken. Gen. McConville is committed to ensuring the Army's readiness, modernization and reform efforts support the Department of Defense and the National Defense Strategy.”

Per the documents, his priorities — in order — are housing, healthcare, childcare, spousal employment, and PCS moves. Sexual assault, suicide, and talent management are other specifics that McConville says he plans to hone in on. And the ATT reiterates how “critical” it is that the Army retain its soldiers.

The document outlines a total of 11 recommendations that the ATT provided to McConville at the beginning of August to better take care of soldiers and their families, including emphasizing predictability with soldiers' assignments; working with the office of Second Lady Karen Pence on spouse employment initiatives; expanding childcare subsidies, and more.

“By creating safe and predictable environments for families to thrive and treating them like valued teammates, the Army can increase retention of the talented soldiers it requires, meeting its goals today and tomorrow,” the document says.

Lt. Gen. Eric Wesley, the deputy commanding general of Army Futures Command who served as the director of the ATT, addressed McConville at the beginning of the document, saying that the feedback they received from the surveys “planted seeds to propel people as your #1 priority.

“We believe we owe it to those respondents to communicate, as candidly as possible, the message they faithfully asked us to provide back to you,” Wesley writes.