Michael Grinston selected as next Sergeant Major of the Army

"He is a world class leader who stands out among our exceptional Noncommissioned Officer Corps," Chief of Staff Gen. Mark Milley said. 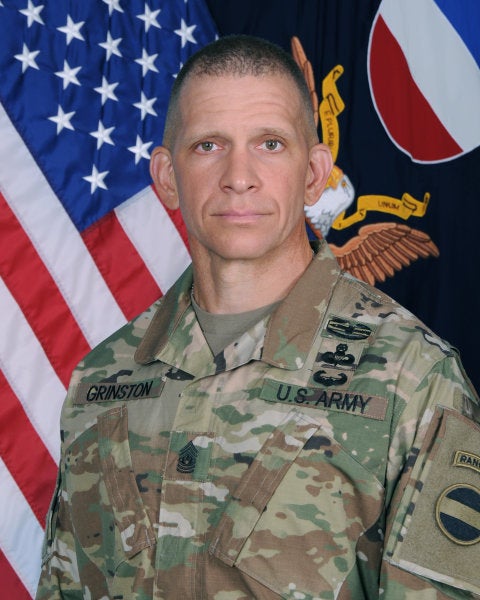 Army Command Sgt. Maj. Michael Grinston, currently the top enlisted leader of U.S. Army Forces Command, will take over as the 16th Sergeant Major of the Army, the service announced on Tuesday.

He will be sworn in on August 16th at the Pentagon.

Grinston will take over for Sgt. Maj. Daniel Dailey, who has been in the position since 2015. Dailey said Grinston “possesses all of the character and leadership qualities necessary to lead our NCO Corps into the future.”

He has been awarded five Bronze Stars — two with Valor — Legion of Merit, Defense Superior Service Medal, and other decoratioons. Among others, he has received the Ranger Tab, Air Assault Badge, and Master Parachutist Badge.

Grinston's responsibilities will include serving as the Army Chief of Staff's “personal adviser on matters affecting the enlisted force.” Gen. James McConville was confirmed to take over as the Army's chief at the end of May.

“I look forward to working with Command Sgt. Maj. Michael Grinston,” Army Secretary Mark Esper said in the announcement. “The Army is in the midst of a renaissance, and he is a great choice to carry on our readiness, modernization and reform efforts.”