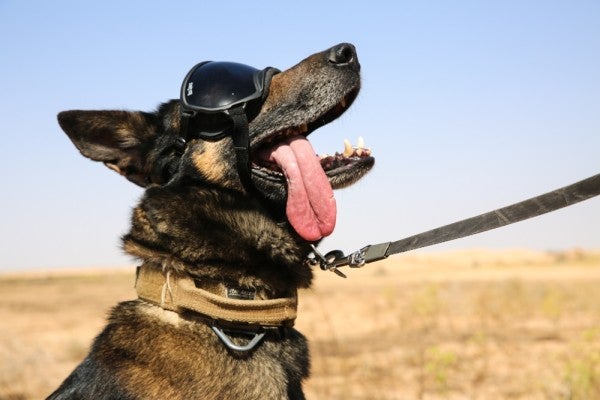 Editor's note: This article is best read in the voice of Sam Elliott, a la The Big Lebowski.

Way out East, there's this dog. A dog I wanna tell you about. A patrol explosives protection dog, by trade, but he went by another name.

He called himself “The Dude.”

And even if he's a cool dog, and he certainly was. Quite possibly the coolest on Al Asad Air Base, Iraq, which would place him high in the running for coolest worldwide.

And that's not just my opinion, man.

When asked about The Dude, or Duders, or El Duderino, if you're not into the whole brevity thing, Spc. Andrew Garcia, the photographer who snapped the above photo during a live-fire exercise at Al Asad on May 18, described him as 'the coolest dog ever.”

And its not hard to see why. In addition to serving six years as a military working dog who's currently deployed with Force Protection in support of Operation Inherent Resolve, The Dude likes to carry his tug-of-war toy and will play with anyone that's willing, Garcia said.

Sometimes there's a dog, and well, he's the dog for his time and place, he fits right in there. And that's The Dude.