6 types of dudes being mad in their cars on video

I watched a few hours of these videos over a long weekend, and once I was able to focus without my brain liquefying and dribbling out of my ears, I was able to categorize the wondrous varieties of inter-auto-macho video 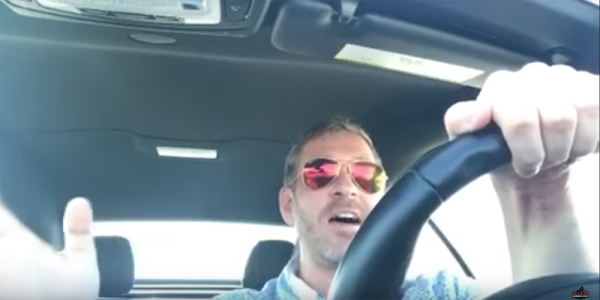 The explosion of mobile technology, social media, and video has been baffling to me, a simple soldier. I was cool when it was just a bunch of kids Harlem-shaking and cinnamon-huffing their way into our hearts. But millennials aren’t the only ones creating weirdly specific viral content. There has been a new hot genre in the recent years spreading across YouTube, Facebook Live and Periscope — hot enough that I needed to investigate it further.

I refer, of course, to men being mad about things in their cars. They say in early America, a squirrel could travel tree-to-tree from the East Coast to the West and never touch the ground. Today in America, a squirrel could travel coast-to-coast on the bumpers of guys with weird facial hair behind the wheel screaming about Harvey Weinstein and threatening to burn their Steelers jerseys.

I have to admit, recording in your car makes sense from an audiophile point of view; few distractions inside and no echo. Hell, I’d record my podcast in a car if, I could find a way to set up my multiple-screen computer to read notes and browse national security Twitter for military memes, because I am A Consummate Professional.

I watched a few hours of these videos over a long weekend — narrowing it down that much wasn’t easy — and once I was able to focus without my brain liquefying and dribbling out of my ears, I was able to categorize the wondrous varieties of inter-auto-macho video.

Reasoning for the car studio seems to range from lack of a studio to wanting to record on a whim. Alt-right icon and Pizzagate conspiracy theorist Mike Cernovich is the kind of video blogger who records whenever the gorilla tugs on his mindset. While he does have a couch that seems perfectly usable for his Nootropics-hawking videos, he is also happy to start a recording in his car to give you the facts on Russian collusion with the Trump administration.

Never let a beer run stop you from making your voice heard.

Mike exclusively drove BMWs until 2016, when BMW did something that upset even the most Gorilla of mindsets, and I’m not sure what he’s driving now. Hopefully something American-made, otherwise he’s not keeping up with the alt-right optics of “America First.” I can tell that it’s no kind of muscle car (Mike has kids, anyway, and that would be impractical), so we’re looking at a mid-size sedan of some kind. Roomy, but comfortable without being too much of a gas hog. Probably a Chevy Malibu. Mike strikes me as a Malibu kinda guy.

Jack Posobiec, deep-state watchdog and Navy urinalysis coordinator, is also always ready for a livestream. Sometimes that means defending yourself in your car for doxxing one of the women accusing Roy Moore of sexual assault; sometimes it means just carrying your phone along in Central Park while you interrupt Julius Caesar, the Shakespeare play about assassinating a Roman leader, for being too political. (Jack is a Navy officer, so I assumed he’d just gotten a six-cylinder Mustang that he bought outside Camp Pendleton and is paying 43% APR on. But that headspace says “sensible sedan” to me.)

Cars are for normal Navy intel officer things, like being on the show of a man who thinks the government is a crime syndicate and 9/11 was an inside job.

Alex Jones of Infowars has a full studio and lots of production value, including cameramen and producers, thanks to selling vitamins. But when the righteous anger takes him, Alex isn’t going to let something like traffic stop him or his Charger. He’s mad at Mark Zuckerberg and not going to just let this heat go to waste!

There really isn’t a reason for these guys to record in their cars, other than that they can. Being mad about stuff shouldn’t have to wait just because you’re barreling down the freeway: When you’ve got some libs to own while not looking directly at the camera, time is of the essence. (The avoiding-eye-contact thing probably raises your standing with the socially broken audience you’ve curated after a lifetime of yelling about false flags from victims of mass shootings.)

2. The “I don’t have anywhere else to put all my stuff” guy

Angry people in cars aren’t some new phenomenon that came with the Trump administration. You can find YouTube videos predating the Trump administration, back when people were mad about the specter of Islamist Kenyan socialism. In “US Army Veteran Gives Dire Warning, Its Time To Prepare”, uploaded in 2015 (and made private in 2017), Thomas Dishaw tells us about the perils of a government preparing to bend or break the Constitution, all while his neighbor is running a weed-whacker in the background around the 2:40 mark. Preparation for the revolution is all well and good, but the HOA doesn’t mess around with grass length along the sidewalk.

The begonias aren’t going to weed themselves, Thomas.

Thomas falls into the category of the guy who gives off the feeling that he’s always prepared. But after a few minutes, you realize that he’s just got nowhere to store his tacticool gear in the house. The purpose is to give an air of preparedness, but it’s not really clear what he’s prepared for. I certainly wouldn’t go out on a mission with this loadout, unless the trunk has a full CamelBak and the other three members of his fire team.

Maybe this is just the bugout gear. His Ford 500 always has his backup vest, secondary AR rifle and tactical headphones, which can’t be plugged into anything in that car, but they look cool when draped over the passenger side seat.

Curiously, nothing he has in his car is readily available in the event of an actual emergency, nor is it strapped down in the event that he has to drive anything other than a straight line in the suburbs. It’s almost as if he just threw everything in, spending only the few seconds to make sure his audience could see the metallic dick extension in the front and the P-mags in the back. Not pictured: literally anything that would be helpful during a revolution, like medical supplies, water, food, or any semblance of sanity.

Retirement was supposed to be better than this.

Sometimes you’re in your car because you’re hungry. Sometimes, your entire video shtick is you trying drive-thru food. Or, in the case of The Angry Grandpa, being forced to navigate your Chrysler through town to sample drive-thru foods with your grandson while he records your colorful frustrations.

This is what cars and smartphones are for, honestly.

Remember when media outlets were breathlessly reporting about an Antifa uprising set for Nov. 4? Nothing happened, but a lot of the eternally online men still stepped into their cars to make videos taunting leftists for sleeping off their PBR hangovers instead of participating in a completely made-up revolution.

That rumor, naturally, was traced back to an angry tacticool dude in his car: Jordan Peltz, a bounty hunter and bail bondsman who wears a fake badge so he can get the rush of being a mall cop, but without a manager who tells him to stop waving his Sig around the Sbarro’s. In a video posted in late August, Jordan claimed to have heard of an Antifa uprising online, and was warning us all of impending doom from people who spend most of their time canvassing for health care and tweeting praise for Carrie Fisher.

I could do a second article on terrible facial hair decisions of the alt right.

Jordan is the kind of person whose car doubles as a studio. The camera setup is perfect to accentuate the gun rack, American flag sticker, and fake-cop sticker badge. His website, CyberCommandIT.com, is mostly a blog about how to avoid phishing scams; sadly, it doesn’t have any more information about the Antifa revolution or how Jordan was able to stop it by flashing his Cracker Jacks badge and cussing like Rooster Cogburn.

Jordan is going a bit more mainstream. According to an email I received from him, he’s been picked up by some sponsors and will be building himself a studio, though he has concerns that the sponsors will require him to censor himself. Here’s hoping that doesn’t happen, so we can have more videos of him yelling about antifa and showing off his cop car and working dog. (I cannot stress enough how much this man is not an actual cop.)

You get a free dog with every light bar you install on your unmarked Dodge Magnum.

Sometimes there’s no better place to have a rant than the driver's seat of your truck. Remember back when you were single and life was simple? When you could just sit in your truck and get mad about Target bathrooms?

I would argue that the lion’s share of car-rant videos fall into this category, where there’s just no more comfortable, safer space than the truck you use to haul home your hunt. The car that has a lot of miles and memories. The Dodge Caravan that has seen a dozen family road trips. It’s the perfect place to scream at liberals.

The Nov. 4 Antifa rumor spurred dozens of videos of dudes in their thirties who spend more time cleaning their overpriced rifles than keeping up their beards or working on that body by Budweiser.

YouTuber “justaworkin” (pictured above) is a prepper with political opinions, but he offers a wide range of other advice, such as how to share the road with bicycles and build your credit. As a writer, podcaster, and hopeful future Army veteran t-shirt company owner, I can respect the building of the brand. Just because the end is near doesn’t mean that it’s here today, and you should be a dick to people riding their bikes to work.

Similarly, you’ll find lots of people in their cars getting mad about white privilege. The interesting thing about doing a YouTube search for white privilege is the results are diverse, but they all come down to a fight for the comfort of your own car.

If a man’s home is his castle, his car must be his armored personnel carrier against the world. It just feels comfortable, the kind of place where you listen to Sean Hannity while silently nodding along. No one can take your Ford Focus away from you.

Let’s be real: You know at least half of these people have tried to make these videos in their homes and had to do multiple takes because their wives don’t want to put up with all their angry yelling. These are the saddest of all.