Are you reading me Lima Charlie? 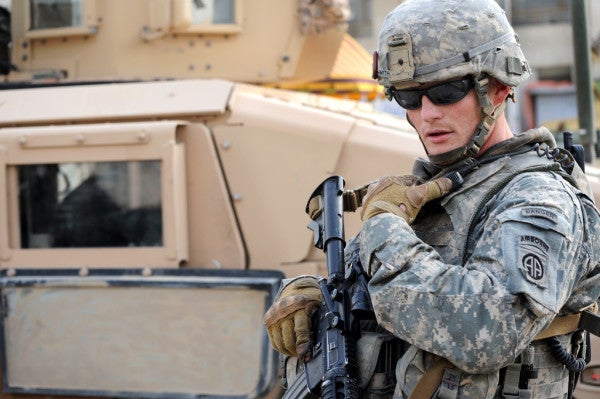 In the military, we tend to pride ourselves on our efficiency. We simply don’t have time to spell everything out, so we invent an acronym for just about everything. It’s a testament to how seriously we take our time, at least when we’re not raking pine needles with pine branches, mopping the water off sidewalks when it’s raining, or cutting the imaginary grass in asphalt cracks with scissors.

But every once in a while, we screw it up and the acronym, or its moniker, turns out to be longer than the word or phrase we’re trying to describe. In order of ascending inefficiency, here are 10 phrases that take longer to say than what they actually mean.

Related: 7 Phrases You’ll Want To Keep Using After The Military »

Charlie Foxtrot is also known as a cluster fuck. Somewhat worse than just a cluster, calling something a charlie foxtrot implies that it is not only disorganized, there is also very little hope that whatever the objective is will be reached and there is a very high probability that everyone will regret their involvement later. As a phonetic expression, it is not particularly egregious, as it only adds one syllable, but keeps the conversation PG if sensitive ears are present. We’ll call this one a wash.

Meaning a day of no scheduled activities. On the surface, this one appears to save us some time, but here’s how the conversation normally goes.

Commander: “Alright guys, Friday is a DONSA, so make sure you do your long weekend counseling before COB on Thursday.”

Commander: “Day of no scheduled activities.”

Commander: “Yeah. In hindsight, I probably could have just said ‘day off.’”

Loud and clear. On one of those rare days when atmospheric conditions are just right and you can actually hear your tactical operations center crystal clear from a whole two kilometers away, you may be tempted to respond to a radio check with “licky chicky,” expending that extra syllable because you’re excited and, well, rhymes sound cool.

Aka, personally owned vehicle. This three-syllable acronym is widely used as a replacement to the much shorter and more universally recognized term, “car.” Try telling your first sergeant that you’ve just completed doing “car inspections” on your unit and watch the wheels turn. “Car? What do you mean by car? Are you talking about P.O.V. inspections?” “Yeah, sure, Top. I meant P.O.V. inspections.”

Or the mobile kitchen trailer. This one sounds shorter, but let’s be honest, we could call it the kitchen, or the mess much faster. Either way, it’s the place where the cooks are boiling a giant bag of “scrambled eggs with coloring” for you right now.

Bravo Zulu is the Navy way of saying well done. Taken from naval signal manuals, which use two-letter abbreviations to introduce or respond to messages, the signal for the letters “B” and “Z” happens to mean “well done.” If we just said, “Bee Zee,” there wouldn’t be much to talk about, other than using a two-letter acronym completely unrelated to the two-word phrase it replaces. However, our insistence on using the phonetic alphabet on top of it has created a four-syllable acronym to replace a two-syllable phrase. “Bravo Zulu, Navy.”

No Go. There’s nothing more enjoyable to a badge holder than dragging out the news that some tester just charged the M240B machine gun with his palm down instead of up during the Expert Infantryman’s Badge test, so he adds a couple of extra syllables by saying, “November Golf” instead of just, “No Go.”

What the fuck? A perennial favorite, exclaimed every time a higher headquarters cuts an order that takes excessive liberties with the one-third, two-thirds rule, every time one of your privates brings you an authorization form to start his housing allowance and you didn’t even know he was dating anyone (he wasn’t; he just married that stripper from Doll House on Friday so he could move out of the barracks), and just about every time an RPG zips past your head. This six-syllable phrase doubles the three syllables of the original, but hey, at least it’s a little more polite, right?

Meaning shit hot. When that new lieutenant makes it through his first field training exercise without getting his platoon lost, you’ve got a sierra hotel lieutenant. If he gets them lost every day and then accidentally calls for fire on his company headquarters, he’s hotel sierra. Either way, it’s a few extra syllables, but worth it if you don’t want him to know what you’re saying.

A version of this article was first published on April 30, 2015.