"Facial hair could impact a promotion whether or not the promotion board knows of the waiver." 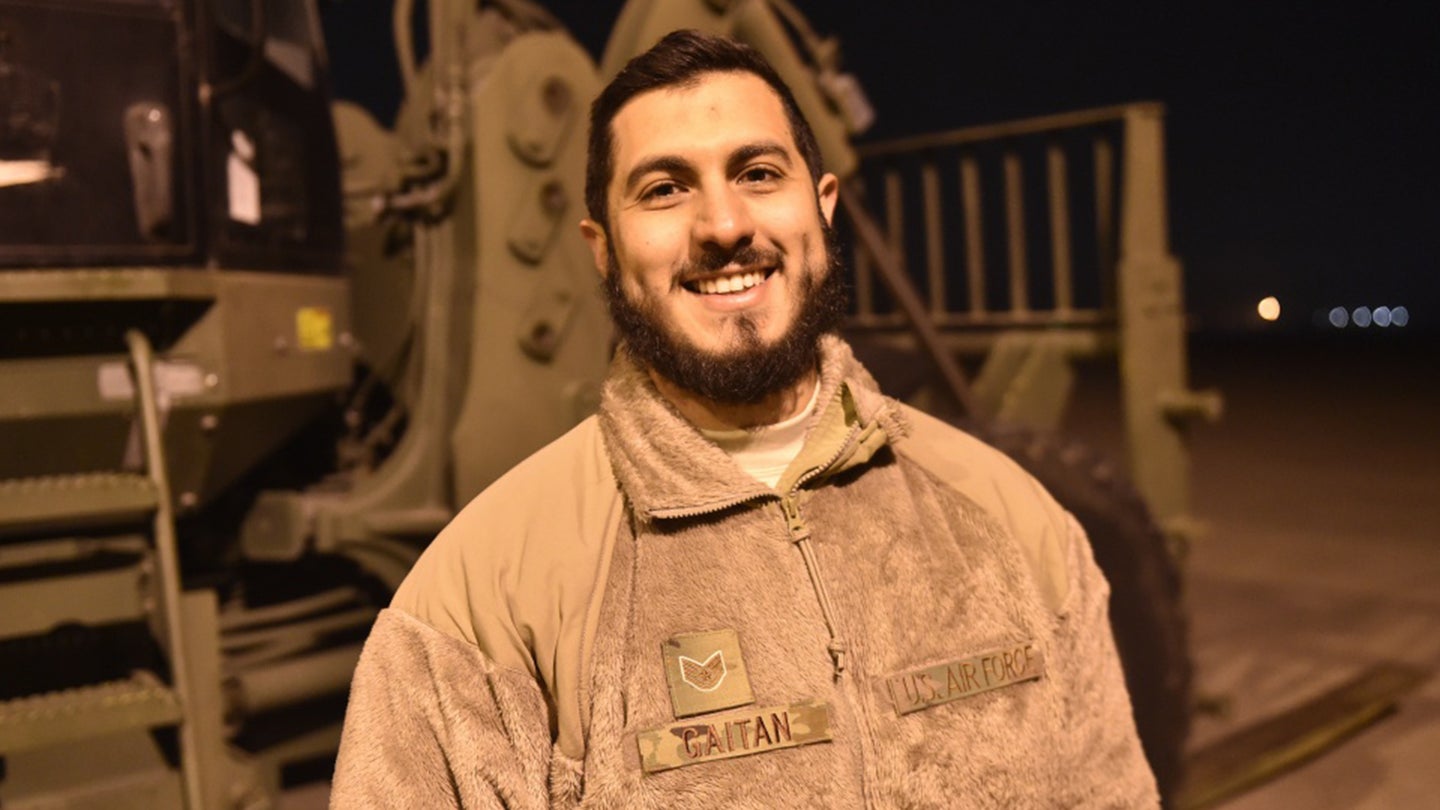 A new study came out last week showing that the Air Force’s ban on beards may be contributing to racial discrimination and hurting promotion opportunities within the service.

When Task & Purpose wrote an article about the study, it kicked off a lively debate on Facebook, Reddit, and in our comments section over what the military’s top air warfare branch should do about whiskers.

Though airmen who cannot shave for medical or religious reasons can obtain shaving waivers, the study found that airmen with waivers face significantly longer promotion times than airmen without waivers. Making things more complicated is the fact that most airmen who need shaving waivers are Black. There are more Black airmen than White airmen dealing with pseudofolliculitis barbae (PFB), commonly known as razor bumps, a skin condition that makes shaving painful and can cause scarring.

Since shaving waivers are associated with delayed promotion times, and since most airmen with waivers are Black, it means that the Air Force’s anti-beard policy is effectively discriminatory, the study argued. Many airmen and veterans applauded the study, saying that it resonated with their own experiences in the Air Force.

“I do think there is a stigma with beards or shaving waivers,” one Air Force 2nd Lieutenant with ten years in service (having been prior enlisted) told Task & Purpose, speaking anonymously to avoid professional reprisal. “I don’t think Black airmen are not getting promoted because they’re Black, but because of the stigma associated with the shaving waiver … I think the Air Force would have to allow beards in order to remove that stigma.”

A commenter on Reddit echoed that view: “I heard a black [chief master sergeant] at Nellis [Air Force Base] during an all call say ‘you don’t see a Chief with a shaving waiver,’” they said. “I’m white AF and I thought that was fucked up. So yeah, it’s career impacting.”

One veteran who reached out to Task & Purpose had a similar opinion.

“When I went through basic training at Lackland [Air Force Base] in 1964, one of our members was a person of color that had [PFB],” he said. “He tried to shave even though his skin was being damaged by the razor and the final result was still not acceptable to the DIs. The DIs made him dry shave as punishment, which resulted in him mutilating his face.

“It still makes me mad to think about his treatment 58 years later,” the veteran added.

Others, however, accused the study of bias. Many people noted that promotion packages rely on enlisted performance reports (EPRs), testing and awards, not whether or not the airman has a waiver.

Air Force promotions “use testing, awards, and performance reports, not shaving waivers,” one retired Air Force veteran with 28 years in the service told Task & Purpose. “As a commander on many assignments, waivers never were an issue in any instance, regardless of race.  Discipline was the main issue along with weight, physical tests, and most notably, financial issues.”

That viewpoint was also shared in the Task & Purpose comments: “Having a shaving waiver has zero effect on promotion,” one person wrote. “You take a written test for christ sake [sic].”

Still, others decried the fact that the shaving issue was tied to racial bias.

“What isn’t considered discriminatory or racist anymore?” said one Facebook user. “Don’t pull a muscle reaching so hard for something that isn’t even there.”

The answer to that question, however, can be found in the study itself.

“[T]he promotion system is not necessarily inherently racially biased, but instead biased against the presence of facial hair which will likely always affect the promotions of Blacks/African-Americans disproportionately because of the relatively higher need for shaving waivers in this population,” the study authors wrote.

Another controversial part of the study was its call for re-examining the Air Force’s most-cited reason for having a beard regulation, which is the concern that a beard would interfere with a gas mask’s seal around an airman’s face. There currently is no clear evidence showing that is the case, the study said. Several readers criticized that finding, saying that they’d seen countless airmen fail the gas mask seal test due to facial hair.

“As someone that has tested members on gas masks for over 15 years, anyone who wasn’t clean-shaven failed 90% of the time, meaning that facial hair ABSOLUTELY interferes with the seal,” one Task & Purpose commenter wrote. “I support the movement for beards but think it should not be allowed downrange for the members own protection.”

With questions like these ricocheting around the internet, Task & Purpose reached out to the lead study author, Air Force Lt. Col. Simon Ritchie, for an explanation. His lightly-edited answers are provided below:

Readers say that Air Force promotions use testing, awards, and performance reports, not shaving waivers. Nowadays there aren’t even photos in promotion packages. What do beards have to do with it?

“We can theorize how facial hair could indirectly, but still significantly, impact promotions. Promotions lean heavily on EPRs/[officer performance reports], and the substance of those reports come from accomplishments that are often due to Airmen taking advantage of opportunities presented to them. Is it plausible that members with facial hair are not offered to escort a General officer who is visiting their base, or brief the Wing Commander on what their shop does, or emcee for a ceremony?

We know that Airmen with shaving waivers are not allowed in the Honor Guard, and there is ample evidence that other special duties also discriminate against this. So, I think it is plausible that facial hair could impact a promotion whether or not the promotion board knows of the presence of a waiver or sees a photo.

Think of it like this: we all know the Airman who comes to work with a disheveled-looking uniform and unprofessional appearance. They don’t get paperwork for this, but everyone knows that they just don’t seem to care. Does that go directly to the board? No, instead we write weak EPRs/OPRs, we water down push lines, we don’t put them up for awards and [decorations], we don’t make them the face of our unit, etc.”

Don’t the disciplinary records play more of a role in promotions than beards?

“Yes, they absolutely do. In fact, in our dataset we found that disciplinary actions were the most significant determinant of promotion time. So why did we not report this? Because that should not be news to anyone and it is not something that would be considered unfair. If you receive an Article 15 and then do not promote quickly, no one will wonder why or claim discrimination.

While our study cannot say why shaving waivers are so detrimental to promotions, what we can say are things that did not impact our findings. We do that by controlling for variables that we think could reasonably affect promotion time. One of these things we controlled for (called a covariate) was disciplinary actions, meaning that the difference in promotion time that we saw between these two groups is not explained by that. Interestingly the shaving waiver group had a statistically significant higher rate of disciplinary actions compared to the non-waiver group. We cannot make conclusions about why this is with our data, and ultimately for the purpose of this study it is not relevant as we controlled for that in our analysis.”

“Yes, many members who attempt a fit test with facial hair cannot pass. Observations like these are anecdotal, however, and are not enough to base decisions on. This certainly is an issue of readiness and, as we state quite plainly in our manuscript, needs to be the focus of future research studies.

As of right now there is conflicting evidence from the civilian sector about how well someone can fit test a medical respirator with facial hair. And keep in mind, there are a myriad number of different masks and respirators being used and tested in the civilian sector: N95, half face, full face, SCBA, etc. While some of these may be similar to a military gas mask, they are not the same, and so we cannot simply accept that data considering the implications of doing so. In addition we have aircrew masks that need to seal that could behave differently as well. I won’t theorize about how this issue could be handled by the USAF, but I think there are many options available that could satisfy all needs. Many of these questions could be answered with fairly straightforward research studies.”

Whether this debate will influence a change in the Air Force’s facial hair policy remains unclear. Chief Master Sergeant of the Air Force JoAnne Bass, who has said in the past that beards are unlikely to be allowed in the service without a shaving waiver, told Task & Purpose that the Air Force is always re-evaluating its policies.

“As we work to build a more inclusive force, we are constantly assessing and evaluating all of the processes and programs that affect our Airmen,” Bass said. “That assessment, and ability to address and adjust, is critical to our force, and our people. I can assure you that we are focused on our Airmen; they are the most competitive advantage we have…and we must get the people piece right.”