"When I talk with our men in uniform: Is this a need or is this a want?" 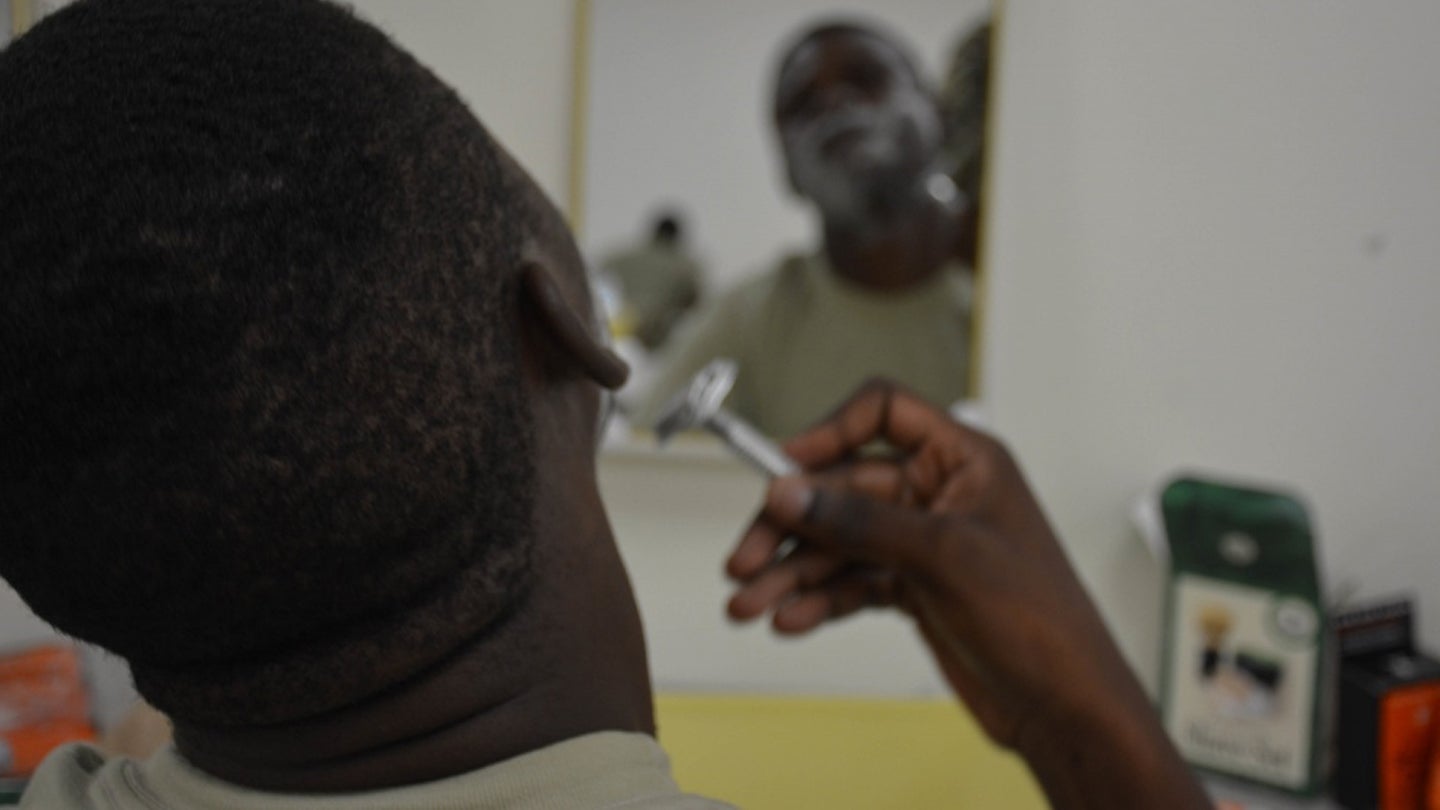 A Soldier assigned to the 3rd Infantry Division Sustainment Brigade uses a single-blade razor to shave his face during a shaving clinic May 22 at the brigade's organizational classroom (Army photo / Sgt. Caitlyn Smoyer).
SHARE

Sorry airmen, you’re not getting beards without a medical or religious waiver anytime soon, as Air Force Chief of Staff Gen. Charles ‘CQ’ Brown and Chief Master Sergeant of the Air Force JoAnne Bass made clear in a live Facebook chat on Monday.

“I’m not inclined to change right now the mustache regs or allow for beards,” Brown said in response to a question from airmen regarding possible updates to regulations on beards and mustaches.

Brown’s argument boiled down to: Airmen don’t just represent the Air Force, but the Department of Defense in general, and uniform and grooming changes must be made in coordination with other branches. The general said the Air Force’s decision in January to change the hair regulations for women to allow for braids, ponytails and bangs were also made with that coordination in mind.

Since that decision, airmen across the internet have called for their service to also allow for beards, often claiming that it was an example of inequality to change grooming restrictions for women and not for men. Bass pushed back on that claim on Monday, arguing that, unlike beard regs, the Air Force’s previous female hair regulations were physically harming women in the service.

Indeed, many women who applauded the changes in hair regulations said they had dealt with irreversible hair loss, hair damage and migraines from pulling their hair back so tight.

“There’s a lot of comparables where ‘Hey if females and women in the military just got their hair changed, how about beards?’” Bass said on Monday. “I can’t tell you how many hundreds of times, probably thousands, that we’ve gotten [that] question. The female hair changes were not a ‘want,’ it was very much a need based on health first … when I talk with our men in uniform: Is this a need or is this a want?”

Bass acknowledged that, for some male airmen, being able to wear a beard is very much a need. For example, some airmen have razor bumps or religious obligations that make shaving painful or unaligned with their beliefs. Bass said those airmen have access to medical or religious waivers, but she said there was room for improvement in making the waiver process easier for airmen.

“I think we probably need to spend some attention looking at [waivers],” she said. “We’ve got that for action.”

A public affairs advisor for Bass, Master Sgt. Jarad Denton, said the team is working to make the process of getting a shaving waiver less complicated for airmen who have a genuine medical or religious need for one. That might involve clearing out some of the bureaucratic hoops that airmen told Bass’ team they have to jump through, Denton said.

The master sergeant said they also hope to address a widespread misunderstanding that the waivers are handed out to airmen who don’t have a genuine medical or religious need for the waivers.

“There’s a misunderstanding of what a shaving waiver entails,” he said. “Doctors aren’t just handing out waivers.”

That misunderstanding can actually have a negative impact on an airman’s career. For example, a study published in the journal Military Medicine last December found that many airmen said a waiver barred them from opportunities such as Honor Guard duty, the Air Force Band, Air Force recruiting positions, and Airman Leadership School instructor positions, all of which are career fields or duties with historically high rates of promotion, the study authors wrote. Other airmen said that they were looked down upon by their commanders and colleagues.

Compounding the problem is the fact that 63% of the respondents who reported a perceived shaving profile bias identified as Black, the report found. Of the rest, 18% identified as white, 14% as Hispanic and 5% as Latino.

Against this backdrop, many American service members, including soldiers and sailors, have questioned the military’s beard ban. Other NATO militaries such as those of Canada, Germany and Denmark, have much more permissive facial hair policies, they point out. The U.S. military often counter-argues that beards get in the way of having a secure gas mask fit. However, nothing is sacred, Denton said, if airmen can make a case that a different facial hair policy would improve readiness. The changes to women’s hair regulations were a prime example of this, he said, as the tight regs were impacting women’s health.

“For the consideration of women’s hair changes (which were approved), the group that submitted the proposal outlined the medical need to make the changes (psychological, physical, uniform fit, etc.),” Denton wrote in an email. “For the consideration of beards, no medical rationale, psychological impacts or uniform fit data was submitted. That coupled with the fact that the Air Force provides shaving waivers for religious and medical accommodations, led to the decision to not change the regulation on beards at this time.”

To change the regs, airmen must make a similar case for facial hair that was made for women’s hair length.

“When those regs were established, clean-shavenness was tied to readiness,” he said. “So anything which changes that has to establish why it is a better fit for readiness.”