US troops will build tent ‘facilities’ to lodge at least 7,500 adult migrants

The Defense Department is loaning the Department of Homeland Security tents, which it will set up for the migrants 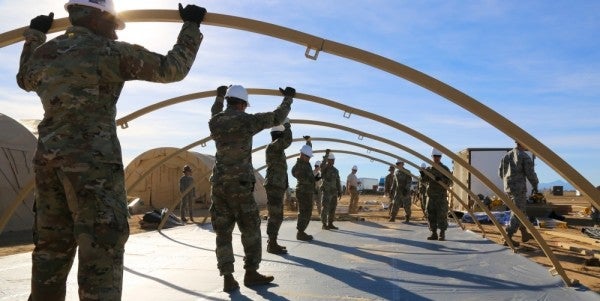 The U.S. military will build 'facilities' to house at least 7,500 adult migrants, the Pentagon announced on Wednesday.

Toward that end, the Defense Department will loan the civil authorities soft tents, which the military will set up at locations identified by the Department of Homeland Security, Mitchell said.

“Military personnel will not operate the facilities and will only erect the tents,” Mitchell said. “Operating the facilities remains the responsibility of DHS.”

Over the next two weeks, defense officials will conduct site assessments to figure out the cost and timeline for building the facilities in Tucson and Yuma, Arizona; and Tornillo, Donna, Laredo, and Del Rio, Texas, he said.

The migrants will be held at the facilities as part of U.S. Immigration and Customs Enforcement removal operations, Mitchell said.