"The work conducted by our military personnel reduces the number of CBP agents required to perform a variety of tasks so that those agents may instead focus primarily on their law enforcement functions." 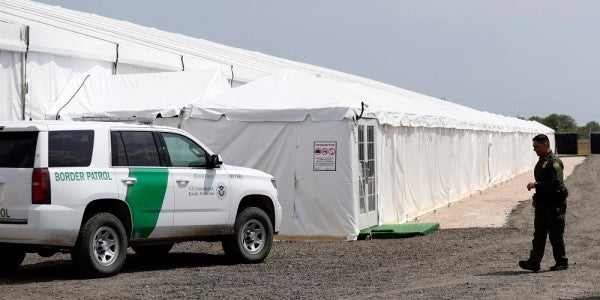 Remember in November when then Defense Secretary James Mattis said U.S. troops assigned to the southwestern border were not expected to interact with migrants?

NBC News first reported that active-duty troops are assigned to a a Customs and Border Patrol camp in Donna, Texas, where their job involves keeping an eye on the migrants being held there to see if any of them are suffering from medical problems.

“Despite past assurances from federal officials that the active-duty U.S. troops deployed to the border would not be in direct contact with migrants or be used for law enforcement, the service members stand watch over the migrants,” NBC reported. “The troops are perched on raised platforms throughout a large room where the migrants are held, according to the four officials.”

Officials from U.S. Northern Command confirmed active-duty troops are assigned to the camp, but they stressed that they were only there to help civil authorities, who are focused on law enforcement tasks, such as providing security.

However, the troops' “ancillary” job is to let civil authorities know if they see any of the migrants acting strangely, Cornelio said.

In April, President Donald Trump hinted that he wanted the U.S. military to play a larger role along the southwestern border.

“I'm going to have to call up more military,” Trump told reporters in Texas. “Our military – don't forget – can't act like a military would act. Because if they got a little rough, everybody would go crazy.”

“Monitoring the wellness of migrants is not a law enforcement function, and this activity has been reviewed by our legal staff to ensure compliance with the Posse Comitatus Act and applicable law,” said Maj. Mark Lazane, a fellow NORTHCOM spokesman.

Fewer than a dozen U.S. troops are assigned to the camp, Lazane said. None of the troops are billeted on site.

Separately, the Supreme Court recently ruled the Pentagon can transfer up to $2.5 billion to build President Donald Trump's border wall. That money includes funds the Army didn't spend after failing to meet its recruiting goals and about $600 million that was supposed to go toward Afghan security forces.

SEE ALSO: US troops are going to make Trump's wall look pretty with fresh paint on a month-long working party

WATCH NEXT: U.S. Marines Work On The US-Mexico Border Wall