Reminder: Don’t Go To Your Base Gate Dressed In A Suicide Bomber Costume

Perhaps your commanding officer may have forgotten to mention it this morning, but I'd like to offer that you shouldn't... 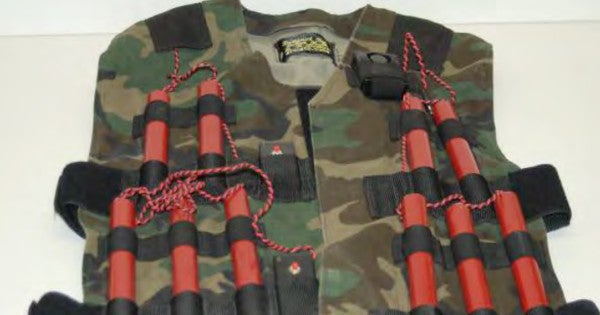 Perhaps your commanding officer may have forgotten to mention it this morning, but I'd like to offer that you shouldn't try to enter the front gate while dressed as a suicide bomber for Halloween.

It's Halloween! you might say, we should be able to go out in whatever costume we want!

And to some extent, I certainly agree. Sure, you could probably tape some scary-looking road flares and wires on your chest and put on a turban before heading out to trick-or-treat with the kids or meander the local streets while admiring the throngs of your fellow costume aficionados.

What harm is there in that?

To which I would say, none! Except for the chance that military police will freak the f–k out if you show up at the gate, call EOD, and initiate a base-wide lockdown due to a possible terrorist incident, which happened back at Fort Bragg in 2015.

“The Soldier was dressed as a suicide bomber with simulated explosive vest. The incident resulted in an emergency response, EOD clearing the entire scene and an extended closure of a gate. Although the incident remains under investigation, initial reports indicate it was a Halloween costume,” read a post from the base on Facebook.

It's unclear what actually happened to the unnamed soldier, but if I were to place a bet, he or she probably no longer has an ass attached to their body since it was chewed off over an hour-long “counseling session” in the first sergeant's office.

Oh, and there's also a slight chance you could be arrested just for wearing it.

Still, while you shouldn't dress as a suicide bomber, you can try your luck as an adorable teddy bear instead.