5 Questions Only A Veteran Would Ask Rob Riggle

Comedian and actor Rob Riggle is perhaps best known for his work as a fake news correspondent on the The... 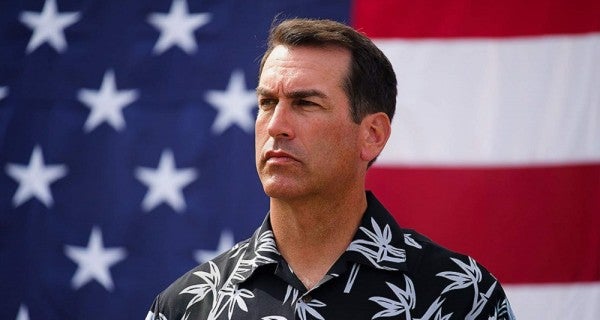 Comedian and actor Rob Riggle is perhaps best known for his work as a fake news correspondent on the The Daily Show — where he once went undercover to get the ground truth on Code Pink in Berkeley, California — and for his roles in comedies like The Hangover, Step Brothers, and The Other Guys.

But the gregarious funnyman holds a special place among veterans and service members, in large part because he’s one of them.

“After 23 years in the service I feel very connected to the military, and very connected to veterans,” Riggle, who retired from the Marines in 2013, told Task & Purpose by phone. “I love this country and I still want to continue to serve. I might not be able to wear the uniform anymore, but I can do other things to help be part of something bigger than myself, which is working on veterans issues.”

When he’s not channeling his inner Mad Dog Mattis, Riggle is busy juggling his film and television career with his work for veterans.

“I’m involved with probably, 10 , and that’s a lot — I still have to go out and make a living,” Riggle said. “I don’t get paid on the first and fifteenth anymore. I eat what I kill. If I’m not out there hunting, I don’t get paid.”

Which is why he decided to visit the Applebee’s in Chatsworth, California on Veterans Day, he said. In between helping out, Riggle took part in that time honored vet tradition: scoring crap-tons of free food on Nov. 11.

“They’ve given away more than nine million free meals to veterans,” Riggle said of the chain’s annual Veterans Day promotion. “This year their goal was another million meals to veterans. I don’t know of any other restaurant company that’s doing what they’re doing.”

“When they called and asked me to be part of it, I was proud to,” he continued. “They put their money where their mouth is.”

Naturally, since we had Riggle on the phone we took the opportunity to ask the Marine-turned comedian and actor five questions only a veteran would ask.

Task & Purpose: The zombie apocalypse kicks off. What’s the first thing you do?

Rob Riggle: Oh, god, hmm. Get to high ground with a whole lot ammo. Zombies don’t have any cardio, we all know that, so they’re not going to make it to the top of the hill, so that’s probably a good place to start. Or, you know, just get a boat. You can go fishing, you can live off the fish. They’re not going to swim out to you, they’re not gonna make it — again, cardio. You’d only have to stay about 100 yards off shore.

T&P: Finish this sentence: You shouldn’t join the military if…

T&P: What’s your favorite war film and why?

RR: Oh gosh, a bunch of them. Black Hawk Down I thought was a really great representation of what happened there, and 12 Strong, because I was in it! Badda bing, badda boom.

RR: I used to like the chili mac. I also liked the chicken and rice, too. Basically, with the chili mac, the reason I loved it so much is that it had the chocolate pound cake, which was pretty much all I needed.

T&P: If you could go back in time and talk to yourself at the Marine recruiting office, what would you say?

RR: That’s a great question. What would I say? Hmm. I would probably tell myself “make sure you put your bars on correctly the first time, so you don’t get stopped and corrected like I did.”