10 questions only a veteran would ask Terminal Lance

Given the enduring popularity of Terminal Lance, we decided to ask its creator the hard-hitting questions no one else would: Like whether he's for or against silkies; what's the first thing he'd do during the zombie apocalypse; and whether he prefers Rip Its or Wild Tiger. 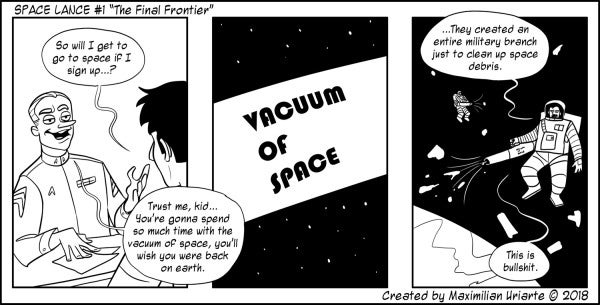 Visit a Marine Corps barracks anywhere on the globe and you'd be hard pressed to find a single enlisted Marine or sailor who hasn't heard of Terminal Lance.

For years the satirical web comic has offered solace to junior enlisted who longed for belligerence in a world teeming with motivated lifers; and offered answers to those most vexing of questions, like “does my command hate me?” (The answer is yes.)

Created by Maximilian Uriarte in 2010, a former infantry Marine and Iraq War veteran, Terminal Lance began as an underground comic geared toward the military's rank and file, and took particular joy in throwing barbs at junior officers, bitter SNCOs, battalion commanders, and playfully ribbing on all who are not in the infantry.

“The main secret to Terminal Lance is that Marines find stuff funny that everybody finds funny,” Uriarte told Task & Purpose.

“You're just finding these fun stupid, funny things to laugh at,” Uriarte said, before adding that readers often “fill in the blanks, and comment with their own stuff and make themselves laugh.”

Over the years, the series' popularity has grown, and Uriarte has moved into more long-form projects, with his semi-autobiographical breakout graphic novel The White Donkey, in 2016 and this year's Battle Born, which debuted July 28 and follows a group of Marines deployed to a remote region in northern Afghanistan.

Through it all, Terminal Lance has remained a consistent source of humor about the absurdities of active duty military life, from the banal to the outright belligerent.

“I get a hundred DMs every day, and I just see everything,” Uriarte said. “I probably see more of the Marine Corps than anybody in existence on a daily basis, just because of the underground culture of Terminal Lance, where people just send me stuff all the time.”

Given the series' reach and popularity, we decided to chat with Uriarte to ask him the hard-hitting questions no one else would: Like whether he's for or against silkies; what's the first thing he'd do during the zombie apocalypse; and whether he prefers Rip Its or Wild Tiger.

You know, serious journalism. This interview has been lightly edited for clarity and style.

Task & Purpose: What’s the dumbest thing you ever did as a boot?

As soon as I got to the fleet, I pretty much tried to skate and keep my nose clean, and be under the radar. So I didn't do a lot of super boot stuff, at least not like to my knowledge. But there are embarrassing photos of me that exist, that I've deleted from the internet, of me in my dog tags and a camouflage shirt on boot leave at home in Portland, having a beer with my family. And I don't even want those photos on the internet.

Okay, next question: Rip Its or Wild Tiger?

Definitely Rip Its. You know, we had Rip Its in Iraq and I drank that 10 of those things every day. Rip Its got me through my deployment. I loved the little cans of Rip Its that you can only get in a combat zone, they don't sell them in the U.S. They're like the small ones. Those things are like candy.

Yeah, Rip Its all the way.

First thing I do — you know, I've thought about this — I'd try to talk my way onto Camp Pendleton. I think that just being on Camp Pendleton in an enclosed secure place with a bunch of Marines with weapons and shit is probably one of the safest places you could be.

I don't know if a lot of people think of that, but a military base — great place to be, and just a couple hours from me, I'm in L.A. I would see if they would let me on the base. I would try to sweet talk my way in, like 'Yo, I'm the Terminal Lance guy, just trying to hang out with you guys during this whole thing.'

Um, that's a tough question. I love old movies in general — actually, that's not true, I hate a lot of movies — but I love Jarhead.

I was never a fan of Heartbreak Ridge, I fucking hate that movie. I don't know why people like it. I guess my favorite one — I like Jarhead a lot — but I think my overall favorite is probably Full Metal Jacket because I'm a huge Kubrick fan.

Yeah, I never really got Heartbreak Ridge, either. It's just moto-boner food. That's all it's there for.

It's so bad. It's such a bad movie. I hated it when I watched it. I was like embarrassed watching it, I was just like 'I don't want to see this.'

Alright, finish this sentence: You shouldn't join the military if…

You shouldn't join the military if your last name is really embarrassing, because it will be on your chest for the whole time.

Man, you know, I was never like an MRE chef kind of guy. There were my go-to MREs that I really liked, and there were the ones I hated too, that I tried to always avoid. I loved the Beef Stew MRE, I don't even know if they still have it. As I was getting out the Chili with Beans MRE was a new one that was really good.

If you could go back in time and talk to yourself at the Marine Corps recruiting station, what would you say?

Man, I would say 'don't go infantry' (laughing). I would say 'that's a dumb idea man, why are you doing this?' I dunno, or maybe I would've just said 'stay home.'

I mean, in all honesty, it was obviously a very beneficial experience for me. I also grew up very poor in Oregon, and it was a great way for me to get out of that place, and kind of move on to bigger and better things, and obviously it was a very good character-building exercise.

I have a story about silkies real quick. While I was in Hawaii, I accidentally wore my silkies to the beach with no underwear underneath, and boy do those things cling when they get wet. They just cling to every crevice and outline. Man, it was an embarrassing walk back.

What was your single scariest experience in the military?

The single scariest experience was realizing that I didn't have my Kevlar. It was like that moment of realization where you're like 'shit, my Kevlar is not here, and it is nowhere to be found.'

And I was a couple of weeks from getting out. It was like the month before I got out of the Marine Corps and I needed to turn it in, and I literally lost my Kevlar. A friend of mine had an extra one, for whatever reason — I didn't ask. So he literally just gave it to me and saved my ass so I had something to turn it in.

Yeah man, my heart just skipped a beat thinking about how awful that would be. Like you're about to get out and the Marine Corps would just be like 'noooope.'

It's like when you leave your rifle somewhere. I remember this one time, this was after my first deployment to Iraq and I was in a mounted platoon. In Iraq, we literally kept our rifles in our truck all the time. It was very common to throw your rifle in the truck and lock it for the night, it's just what we did.

And you know, when you go to Iraq you know when you can leave your rifle, and I remember this one time, I did the MRAP training course at Twentynine Palms for my second deployment, and I had left my rifle in the MRAP and I just walked out for a minute, and I was like 'oh shit, I better grab my rifle because it's in the MRAP.'

But that was a terrifying moment, realizing I didn't have my rifle on me and that this guy wouldn't give it back.

Alright, last question: What was your proudest moment in the military?

My proudest moment, hmm. I would say it was after I got my wisdom teeth pulled out and I didn't have to go on a five-day field op. I was so proud of my masterful skating abilities, getting my teeth ripped out of my mouth so didn't have to go on this exercise. But I still had to talk my way out of it, because they were like 'err, you're fine, just pop some Motrin.'

But I just talked my way out of that field op, and I'm proud of that moment.