“White Donkey,” a 284-page graphic novel that chronicles one Marine’s journey to Iraq and back, has taken the Marine Corps... 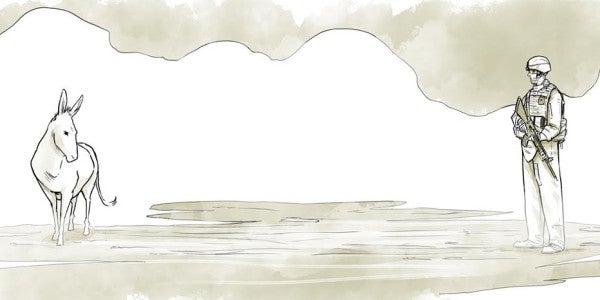 “White Donkey,” a 284-page graphic novel that chronicles one Marine’s journey to Iraq and back, has taken the Marine Corps and military communities by storm. The work was widely anticipated, due largely to the celebrity of its author, former Marine infantryman Maximilian Uriarte, and is currently sixth on Amazon’s best books list after its first day for sale on the site.

A recent interview between Uriarte and Task & Purpose probed a central theme in the book: the main character Abe’s search for purpose.

“I wanted to get at the idea of what does this mean. What do you get from all of this?” Uriarte told Task & Purpose on the experience of joining the Marine Corps and deploying to a place like Iraq. Indeed, Abe is regularly confronted by a question of what he is searching for through his experience in the Marine Corps.

In an all-volunteer service that prides itself on promising young men and women a torturously tough experience, that’s a question that resonates with many young Marines and Marine veterans, including Uriarte himself.

Related: Terminal Lance just nailed how veterans will write the next chapter of American history.

“I always found myself searching for something and I could never peg what it was,” Uriarte said. “What I wanted to highlight is that it is really arrogant to use as a platform for your own enlightenment.”

Using his own experiences as a Marine infantryman in Iraq perfectly captures the best and worst of life at the bottom of the Marine Corps’ pecking order. That reality is rife with nuance. It can be funny and self-depreciating, but terribly trying when forced through the gauntlets of youth, personal ambition, and — perhaps most critically — war.

Uriarte said he wanted to tell a war story that was less appreciative of war. “Even the most somber war stories glorify it to an extent,” Uriarte said.

Beyond that, however, Uriarte said he hopes the book’s story of resilience resonates with a new generation of combat veterans. In an email, Uriarte said he has lost four fellow Marines to suicide and described mental health issues as “an ongoing issue at the heart of this book.”

“It’s an exploration of the existential crisis of going to war, but also, I feel like if any one Marine reads this book and is able to identify with the characters and is able to reach for help, it would all be worth it,” he said.

In many ways, Uriarte is the perfect person to write this type of war story. Since launching his insanely popular comic strip Terminal Lance six years ago, Uriarte has become a sort of cultural icon for the junior enlisted Marine. Uriarte’s comics offer snippets of the nuances in Marine Corps culture easily shared by anyone who has ever earned the Eagle, Globe, and Anchor. And they’re insanely funny.

Related: Here’s how a Terminal Lance comic strip is made.

“White Donkey,” however, is something more than that. The nuance from the comic strip is there, to be sure, if not magnified. The humor is undoubtedly there. But the experience of the book is something new from Uriarte.

It is not, however, something new for Uriarte, who told Task & Purpose in a recent interview that the genesis of the project actually predates his comic strip.

“I had always wanted to write a story about Iraq,” he said, adding that the story has been in his head since 2010, the same year he started Terminal Lance.

“It was insane,” Uriarte said of the support the project received online. “It was really humbling and flattering that these people had faith in my idea.”

Now that the project is finished, Uriarte said the feeling of being done with something he dreamed of doing for so long, and worked actively toward since launching the Kickstarter in 2013, is surreal.

“Finishing it was just like ‘what the fuck do I do now?’” he said.

For one of the most iconic and creative voices in his generation of military veteran, it’s a pressing question.

Uriarte told Task & Purpose he is preparing to move from San Francisco to Los Angeles, where he is going to launch his own animation studio.

“My goal has always been screenwriting and filmmaking,” Uriarte said, adding that he originally conceived “White Donkey” as a film, and he would still like to make an animated film from the book.

“I would love for this to be my first movie, but I have a lot of work to do to make that happen,” he said.