He Grew Up In Baghdad. Now He’s A Paratrooper With The 82nd Airborne

Editor’s note: This post has been adapted from an original story by Army Sgt. Anthony Hewitt, 3rd Brigade Combat Team,... 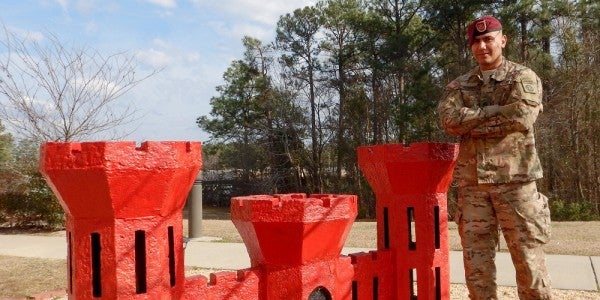 Editor’s note: This post has been adapted from an original story by Army Sgt. Anthony Hewitt, 3rd Brigade Combat Team, 82nd Airborne Division. You can read that story here.

In 2015, Army Sgt. Ali Alsaeedy was deployed to a residential area in Baghdad, Iraq with the 82nd Airborne’s 307th Brigade Engineer Battalion, as part of the ongoing military campaign against the Islamic State in Iraq and Syria. But unlike every other soldier in his unit, he knew the customs, the language and the people, and not just because of his training; he had been deployed to the same city — and same neighborhood — where he grew up.

Alsaeedy had a pretty normal childhood growing up in Baghdad in the 1980s. The son of an Iraqi Army officer, he played basketball, walked to school, and grew close with the kids in his neighborhood. Sure, “there were negatives in politics,” but on the whole “everything was fine,” he said in a Department of Defense news release.

A few years before the U.S. invasion, Alsaeedy enrolled at the University of Baghdad to study biochemical engineering, but with the ouster of Saddam Hussein’s regime and the country’s plunge into sectarian violence, the once peaceful life Alsaeedy, his five brothers, and one sister once enjoyed was gone.

“We felt there was not going to be any more tyranny system or sects of families taking over the country, doing whatever they felt they wanted,” Alsaeedy said. “So we believed in the change and welcomed it.”

Life in Iraq wasn’t easy following the invasion, and work was scarce after Alsaeedy graduated from college. So Alsaeedy took on whatever work he could find, though he always wanted more. “It was not just about money or security,” he said. “It was about being a part of something important to me.”

Related: He Was A Terp For Recon Marines In Helmand. Now He’s Headed To The School Of Infantry »

In 2005, Alsaeedy was working as an information and networking specialist for a satellite communications company when he got his lucky break: the U.S. military base at Al-Qa'im, near the border of Iraq and Syria, needed someone to handle setting up their internet network. Alsaeedy, who’s fluent in English, got the job, and for the next five years he worked alongside and became close with American troops in Iraq. “They were trustful, pleasant and respectful; they integrated me into their brotherhood,” Alsaeedy said.

By 2010, he’d met his five year requirement to apply for a special immigrant visa, and was lucky enough to get one, settling in Norfolk, Virginia and settled there for a time, but that feeling, that itch, came back — Alsaeedy wanted to do more for his adopted country.

In August 2013, Alsaeedy enlisted in the Army as a combat engineer. After basic and advanced individual training at Fort Leonard Wood in Missouri, he went off to Georgia for U.S. Army Airborne School at Fort Benning.

When Alsaeedy eventually returned to his old neighborhood in Baghdad, Iraq in 2015, he did so as a paratrooper with the 82nd Airborne, 307th Brigade Engineer Battalion, 3rd Brigade Combat Team.

“My real dream was to return to Iraq,” Alsaeedy said. “I wanted to be an asset to the unit. I had the language, the background and culture. I knew if I ever went back, I would put myself out there to be as valuable as I could for the 307th.”

After his deployment, where he picked up the rank of sergeant and became the first service member in Operation Inherent Resolve to receive a battlefield promotion, Alsaeedy headed off to Ranger school at Fort Benning — and passed.

“I am just so grateful. I cannot put into words how I feel, landing the opportunity during the mid-2000s to becoming a citizen, a soldier deployed to my hometown and a Ranger,” he said. “The Army adopted me, and I am forever in debt to the most professional and perfect organization: the 82nd Airborne.”