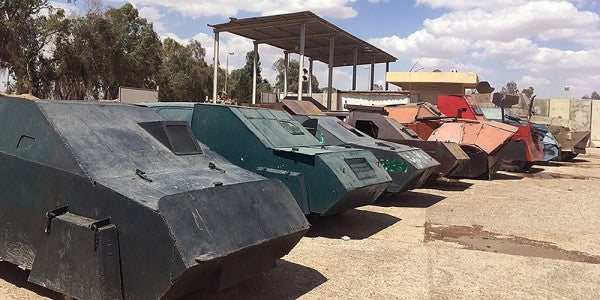 The grueling ground offensive against the Islamic State in Mosul, Iraq, is entering its final stage. The last few neighborhoods held by ISIS — approximately five square miles of snaking alleyways and narrow city streets — are expected to be the most difficult to retake for the U.S.-backed Iraqi Security Forces.

The ISIS fighters still in Mosul — estimated to number a few hundred — are left with what they have in the city: a parade of stitched-together technicals, car and truck-bombs, and various improvised weapon systems. Earlier this month, the 9th Iraqi Army Division conducted a clearing operation in the northwestern part of the city; and in the process, they raided ammo and supply caches left behind by dead or fleeing Islamic State fighters.

Task & Purpose reached out to the 2nd Brigade Combat Team, 82nd Airborne Division, which is partnered with the 9th IAD, to ask about the ISIS gear the Iraqi troops recovered, how these weapons are used by the Islamic State, and how effective they are. It’s through these brief glimpses of ISIS’s armory that we can get a sense of the militant group’s power in Mosul, or what remains of it.

The Islamic State is making its own ammo. It’s not very good.

ISIS spent the last two years stockpiling ammunition and weapons. But with its supplies dwindling, its fighters have taken to making their own mortar rounds and rockets from spent shells and debris, Maj. Kevin Ryan, the intelligence officer for the 2/82nd, told Task & Purpose.

“What we find now is very much a hodgepodge of ammunition that’s left over from their fight in the East, and the things they were able to retrograde from that fight,” Ryan explained. “For the most part the caches the ISF is recovering, the majority of that ammunition is shoddily made. They’re able to find scrap metal and create weapon systems and munitions from leftover pieces that may be available, that they find or repurpose. These caches are manufactured at a very low level of expertise and are pretty low grade.”

The reason is pretty simple: There aren’t many ISIS fighters left in Mosul with the level of expertise required to manufacture munitions — they’ve all been killed, or they fled, which has led to severe rationing among their fighters.

The lack of readily available ammo has a pretty direct impact on an ISIS fighter’s field tactics, Ryan said.

“He may go into a direct fire fight not loaded down too much,” he said. “He may take a chest rack into the fight with a couple AK clips, but he fights fairly close to a cache, so if he does need to reload, then he can move back to a cache.”

Without more mortars (or mortarmen), ISIS has little in the way of indirect fire.

ISIS’s indirect fire has never been terribly accurate, and its mortar teams compensated by lobbing a high volume of largely indiscriminate IDF, which was once a significant threat to Iraqi and U.S. troops in Mosul. But now, the Islamic State’s indirect fire capabilities are shredded, according to Col. Patrick Work, the brigade commander for the 2nd Brigade Combat Team, 82nd Airborne Division.

“At one point they had skilled mortarmen that were centrally controlled, but now it’s in shambles,” Work said. “The enemy’s indirect fires capability is decimated. It’s been a long time since it’s been a factor in battle.”

By no means has the effectiveness of ISIS’ arsenal been utterly degraded. They are still fielding a wide range of deadly weapons against the Iraqi army, and the biggest threat comes from suicide bombs and vehicle-borne improvised explosive devices.

ISIS’ “precision-guided weapon is the suicide bomb,” Work said. “It does have some military expertise when it comes to engineering those weapons.”

The VBIEDs fielded by ISIS are a far cry from the car bombs seen during the height of the insurgencies in Iraq and Afghanistan, which relied on stealth and subterfuge, with insurgents packing an ordinary car or truck with explosives and parking it near a military compound or rolling up to a checkpoint before detonating. Many of ISIS’ “car bombs” are up-armored suicide trucks — or tractors — designed to steam toward their target before exploding.

To counter this threat, Work said the ISF have “adjusted tactics to where they have drill-like precision,” which involves setting up obstacles and overwatch, taking advantage of berms and cover, and countering approaching VBIEDS with anti-tank weapons. Iraqi troops have taken to using breaching-and-clearing vehicles, specifically bulldozers, to defend against approaching VBIEDs in Mosul, according to The Washington Post.

Rudimentary in nature, an improvised explosive device still requires a particular skill set to make, and it’s not one that’s easy to replace after, say, your bombmakers get blown up by a drone-delivered Hellfire missile.

“The biggest thing he’s limited on right now are his experts — his engineers that were building these bombs to make them effective — those guys have been killed or fled the battlefield,” explained Ryan. “Also, as ISF takes terrain, it removes caches but it also removes the ability for [ISIS] to employ some of these suicide bombs that he’s prestaged, and sometimes the ISF overruns them and is able to recover these before they’ve been used.”

The majority of these bombs, Work said, “do not succeed in damaging their targets.”

‘ISIS drones’ in Mosul are not a game-changer.

The Islamic State uses drones for “standoff reconnaissance,” Work said, but the group has also modified some drones to deliver munitions, with mixed results.

The Islamic State also appears to use drones to monitor and track targets for its “precision-guided weapon” systems: suicide VBIEDs. In March, a video purportedly showing an ISIS suicide VBIED attack went viral — the size of the explosion, and its clarity, smacked of post-production and Adobe after-effects, as Adam Linehan of Task & Purpose noted — but what stands out is how a drone was used in the attack, not only to track potential targets, but to record the scene for propaganda purposes.

Islamic State fighters in Mosul are relying on a finite supply of commercially available drones. With supply lines cut off, it’s not like they can just order a quadcopter drone off of Amazon. Even if they could, according to the U.S. advisers near Mosul, the effectiveness of ISIS’ drones has been severely limited.

“At one point, this was a considerable threat to ISF,” Work said, but not so much now that the Iraqis have deployed a combination of counters and tactics, like using cover, concealment, and camouflage.

Also important, according to Work, is assigning air guards — who, “you know, simply look up.”

Once a drone is downed, Iraqi and coalition forces quickly gain an upper hand on their would-be attackers. “The Iraqis, when they knock down a drone or a drone falls out of the sky, they’ll recover it and they’ll share it with us and there’s some opportunity to exploit the automation,” Work said. “You know, there’s fingerprints inside of that thing, and we use it to understand the network and to attack these networks at the source.”