This Marine Says The Corps ‘Kicked’ Him ‘To the Curb.’ Now He’s Fighting Back

In 2003, Tyson Manker was a 21-year-old Marine corporal leading an infantry squad during the invasion of Iraq. He saw... 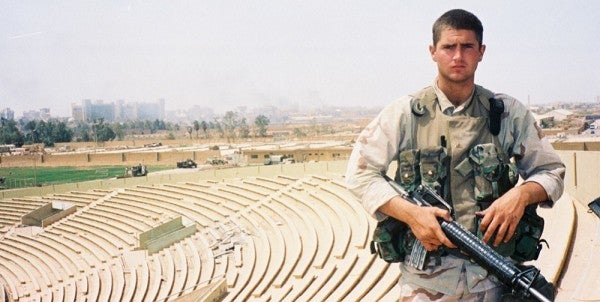 In 2003, Tyson Manker was a 21-year-old Marine corporal leading an infantry squad during the invasion of Iraq. He saw combat, served under fire, and witnessed the indiscriminate violence of war first-hand.

By the end of that year, he was kicked out of the Corps with an other-than-honorable discharge — one of several punitive separations the military hands down, which preclude veterans from accessing health, education, and disability benefits through the Department of Veterans Affairs.

Manker’s bad paper discharge, as they’re often called, stemmed from self-medicating with marijuana to treat the symptoms of his then-undiagnosed post-traumatic stress disorder. This was an injury brought on by being party to the accidental death of civilians during chaotic frontline combat on the streets of Iraq at the height of the invasion, according to a March 2 New York Times profile of the former Marine turned-attorney and veterans advocate.

Today, Manker, joined by the National Veterans Council for Legal Redress, filed a federal class-action lawsuit against the Navy’s discharge review board on the basis that it has a “systemic institutional bias or secret policy that discriminates against applicants who suffer from PTSD.”

In 2014, then-Secretary of Defense Chuck Hagel issued new guidelines for upgrading discharges, instructing review boards to give “liberal consideration” to the possibility that post-traumatic stress disorder could have contributed to an other-than-honorable discharge. While the Army and Air Force quickly stepped in line, the Navy review board has hardly budged.

As of 2017, the Army and Air Force discharge review boards granted upgrades to 51% of applicants whose appeals were linked to PTSD, according to a Yale Veterans Legal Services Clinic statement. For the Navy review board, which oversees appeals from sailors and Marines — just 16% of similar applications were approved.

Manker attempted to upgrade his discharge in 2016 and submitted a 65-page petition to the board — only to receive a denial of just several pages, rife with misspellings, the New York Times notes.

The lead plaintiff in the case, Manker filed the March 2 suit on behalf of himself and other similarly discharged Marines and sailors, and the National Veterans Council for Legal Redress is representing its members in the lawsuit against Richard V. Spencer, the secretary of the Navy.

“Fifteen years ago when we came home from Iraq and were treated like the scum of the earth, we never thought this day would come,” Manker said during a March 2 press conference in New Haven, Connecticut. “And when I say ‘we,’ I’m referring to the thousands of Marines and sailors who were kicked to the curb by an ungrateful country and a military that prioritizes mission accomplishment over troop welfare at all costs.”

The VA issued a new policy last year permitting veterans with other-than-honorable discharges to receive emergency mental health care. But the vast majority of VA mental health care resources remain out of reach for them.

“Not everyone who serves overseas and is injured comes back missing a limb,” Manker said. “That doesn’t mean that everyone who comes back is perfectly okay … When soldiers, sailors, Marines and airmen go to serve on the front lines in a foreign country, when they’re injured, their injuries aren’t properly treated.”

That, Manker added, “is a national disgrace and we’re putting our foot down — no more business as usual.”