Just one week after the the Marine Corps declared that Marines who share nude photos without consent would be punished... 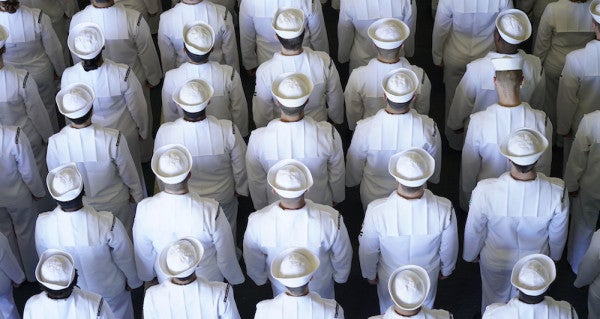 Just one week after the the Marine Corps declared that Marines who share nude photos without consent would be punished with mandatory separation, the Navy is following suit.

On May 16, the Navy issued a new guidance stating that enlisted sailors caught distributing or broadcasting explicit photos and videos without the subject’s consent, in violation of Article 1168 of the service’s regulations, will face a mandatory administrative discharge.

“There is no room in our Navy for this toxic behavior,” Vice Adm. Robert Burke said in an accompanying statement. “This new policy shows that we are committed to eradicating this behavior from our force.”

The guidance comes almost a month after acting Secretary of the Navy Sean J. Stackley in April published an interim revision to Navy regulations officially designating the distribution of explicit images by Navy and Marine Corps personnel as wrongdoing “if the person making the distribution or broadcast does so without legal justification or excuse knows or reasonably should know that the depicted person did not consent to the disclosure.”

The Navy policy applies to all explicit media posted online “with the intent to realize personal gain; with the intent to humiliate, harm, harass, intimidate, threaten, or coerce the depicted person; or with reckless disregard as to whether the depicted person would be humiliated, harmed, intimidated, threatened, or coerced,” according to Navy Times.

As Navy Times notes, the new rules surrounding Article 1168 essentially “make the act of posting intimate or nude photos a violation of a lawful order,” a violation punishable under Article 92 of the the Uniform Code of Military Justice.

In March, a new Corps social media guidance also connected sexual exploitation with Article 92, or failure to obey a lawful general order: “Marines must never engage in commentary or publish content on social networking platforms or through other forms of communication that harm good order and discipline or that bring discredit upon themselves, their unit, or the Marine Corps.”

Earlier in May, Rep. Jackie Speier of California told Task & Purpose that the Naval Criminal Investigative Service had reviewed more than 131,000 images across 168 websites as part of the military’s investigation into the non-consensual distribution of explicit media in months since the “Marines United” scandal exposed a subculture of digital harassment and exploitation in the Corps.

In March, NCIS claimed to have identified more than 1,200 members of the “Marines United” Facebook group that sparked the investigation, including 700 active-duty Marines and 150 reservists.

At the time, a spokesman said that 30 service members faced courts-martial as a result of the investigation. It is unclear yet how the updated Corps and Navy regulations will affect existing court-martial proceedings.