The Marines’ Nude-Photo Scandal Has Spread To The Navy

Dozens of female sailors stationed around the world have been “targeted by anonymous online voyeurs seeking, collecting and distributing naked... 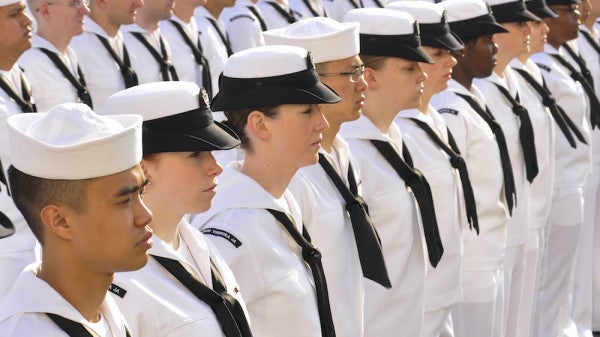 The suspected voyeurs are “likely other sailors or people closely familiar with their command personnel,” Navy Times reported.

Navy Times’ investigation confirms previous reports that the sexual exploitation of servicewomen in digital communities like the “Marines United” Facebook group exists in other branches of the armed services. A report by Business Insider found that military forums on message boards like Anon-IB and 4Chan have become receptacles for nude photos and videos of female troops from across the military, often captured without the knowledge or consent of their subjects. Subjects were often identified by name, job title, and rank.

In response to the investigation, Adm. John Richardson, the chief of naval operations, composed a harsh memo to his subordinates:

Team, we have a problem and we need to solve it. Really solve it — not put a band-aid on it, not whitewash over it, not look the other way.

The discovery of online sites that degrade the female members of our team has shined a light on the fact that this problem persists. But we get reminders of it every day, when we disrespect women by crude jokes, wisecracks, sexual harassment, and in its worst manifestation, sexual assault — a serious violent crime. Despite a steady effort to get after this, we’re not making progress.

I’ve heard hundreds of times that 'these actions are being taken by only a small minority Prove that. If that’s true, then the vast majority of men and women need to stand up and smother this behavior. To become intolerant. To act to put a stop to this. And if you’re one of that minority that just won’t get it, then it’s time for you to leave the Navy.

Adm. Richardson called on Navy officers to take action to protect their fellow servicewomen. “Make it clear that individuals who can't live up to our professional standards in competence and character are not welcome in our Navy,” he demanded in his statement. “Make it clear that our standards call us to a higher commitment than the law — we are better than that.”

Republican Sen. Joni Ernst of Iowa, a retired Army National Guard officer, said, “This is service-wide. And so we need a service-wide approach to addressing this issue. This is a cultural problem not just in our military, but society at large. … Illegal or not, members of our community need to know this type of activity creates a culture that leads to sexual assault.”