The NCIS task force that has spearheaded the forensic investigation to identify victims of the 30,000-member ‘Marines United’ Facebook group,... 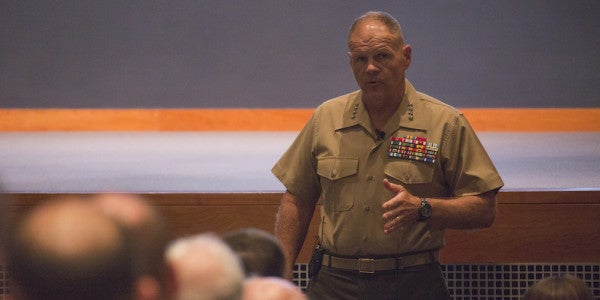 Task Force Purple Harbor sounds like the worst possible name for a group of military investigators who have reviewed 131,000 sexually explicit images across 171 websites in the months since the scandal broke. But NCIS has a perfectly good explanation, of course.

“The name was selected to remind victims of the safe harbor and to indicate the joint, or purple, nature of the team,” NCIS special agent Russ Alberti stated during remarks before the Defense Advisory Committee on Women in The Service (DACOWITS) on June 14.

Sure, we get it. But given the sensitive nature of their work, this vaguely suggestive name choice may not sit well with some observers — like, say, Rep. Jackie Speier, a long-standing critic of sexism in the military whose staffers have worked with NCIS investigators for months.

“I had a staff member literally Google ‘Tumblr Army naked’ and find numerous pages of websites that show servicemembers in intimate situations,” Speier told Task & Purpose during an interview in May. “We gave those pages to NCIS, and they were able to identify about 90 new photos” (Speier's office declined to comment).

When reached for comment by Task & Purpose, NCIS relayed a non-response in the form of an excerpt from Alberti's remarks: “NCIS leadership quickly and correctly understood two important points: First, social media cases would be an enduring issue, and second, the investigations would cross service boundaries.”

Despite this, Task Force Purple Harbor is getting the job done. One active-duty Marine faces a possible court-martial and another has been punished with administrative discharge, the Marine Corps commandant, Gen. Robert Neller, revealed during testimony before the Senate Armed Services Committee on June 15.

NCIS and the Marine Corps Criminal Investigative Division have identified 65 active-duty Marines as “candidates for punitive action” based on their examination of explicit media, according to Military.com. Of the 59 candidates referred to their commanding officers for disciplinary action due to insufficient evidence for courts-martial proceedings, 5 received some sort of nonjudicial punishment, while 5 more were slapped with “adverse administrative action of some kind.”

The identity of the Marine facing court-martial has not been made public at this time. In April, Master Sgt. Theophilus Thomas, a 39-year-old Marine assigned to the 2nd Marine Aircraft Wing stationed Marine Corps Air Station New River in North Carolina, was arrested and charged with “disclosure of private images,” a felony under North Carolina law.

“I've gone personally, as all my leaders have gone, and spoken to literally tens of thousands of Marines and made them understand what their responsibilities are,” Neller told lawmakers on June 15. “The social media things that we've seen were just indicative of a problem within our culture, that we did not properly respect or value the contributions of women in our Corps, and that's the problem we have to fix.”