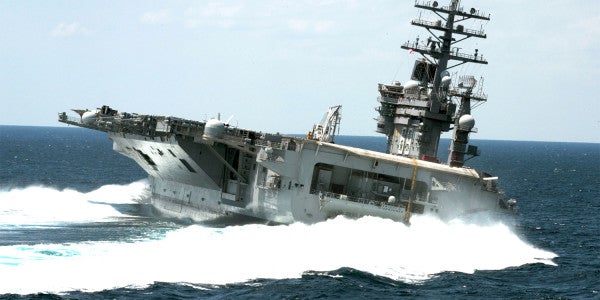 Four years after it began, the weird, orgy-filled “Fat Leonard” bribes-for-Pacific-port-calls scandal has yielded new criminal charges for eight sailors and Marines, including a one-star admiral who’s been working in naval intelligence for the last three years without a security clearance. Also covered in the new indictment: Sex acts that involved prostitutes and some artifacts from Douglas MacArthur’s old office in the Philippines.

Six senior naval officers, a retired Marine colonel, and a warrant officer were indicted Tuesday on a variety of charges relating to favors they allegedly accepted — “including $25,000 watches, $2,000 boxes of Cohiba cigars, $2,000 bottles of cognac and $600-per-night hotel rooms,” to say nothing of the many, many prostitutes — from “Fat” Leonard Glenn Francis, a Singapore defense contractor, between 2006 and 2014, the Washington Post reported.

But, as the Post’s accompanying graphic suggests, prostitutes were a preferred enticement of Francis’:

Francis has admitted to spending millions in bribes to Navy officials in order to obtain classified info on ships’ movements and operations, which he utilized to profit strategically off of the Navy’s port calls. He pled guilty to multiple charges in early 2015 and awaits sentencing.

Tuesday’s indictment was chock full of details on how to persuade scads of Navy captains and commanders to break opsec:

According to the charging documents, Francis also frequently sponsored wild sex parties for many officers on the USS Blue Ridge, the flagship of the Navy’s 7th Fleet, and other warships.

During a port visit by the Blue Ridge to Manila in May 2008, for example, five of the Navy officers attended a “raging multi-day party, with a rotating carousel of prostitutes,” at the Shangri-La Hotel, according to the indictment. The group allegedly drank the hotel’s entire supply of Dom Perignon champagne and rang up expenses exceeding $50,000, which Francis covered in full.

On another port visit by the Blue Ridge to Manila in February 2007, Francis allegedly hosted another sex party for officers in the MacArthur Suite of the Manila hotel. During the party, “historical memorabilia related to General Douglas MacArthur were used by the participants in sexual acts,” according to the indictment.

What could these historical memorabilia be? There’s actually a lot online about the MacArthur Suite, which runs $3,300 a night, and has reportedly played host to Bill Clinton.

What goes on in here stays in here, until the indictments are unsealed.snappedandscribbled.com

The suite has a conference table used by the famed general, as well as shadowboxes of medals and, according to this tourist’s photograph, something else on his work desk:

Use your imagination. Or you know what, maybe don’t.

The senior officer indicted Tuesday was Rear Adm. Bruce Loveless, who made headlines last year when it was revealed that he and his then-boss, Rear Adm. Ted “Twig” Branch, were running the Navy’s intelligence shop without access to classified material; their security clearances were revoked in November 2013 in connection with the Fat Leonard investigation. Branch, who retired from the service last November, has not been charged.

In addition to the eight indicted today, 13 people have pled guilty in the Fat Leonard case. Six more await trial, two remain under investigation, and four admirals — including a former Naval Academy superintendent — received censures. Investigators say as many as 200 individuals are still under scrutiny, which is likely to lead to a lot more drinking in the 7th Fleet, probably of cheaper hooch than Fat Leonard could provide.