Thousands Of Troops Have Had Their Explicit Photos Shared Without Consent, DoD Report Finds

On Monday, the Department of Defense’s Sexual Assault Prevention and Response Office released its report on sexual assault in the... 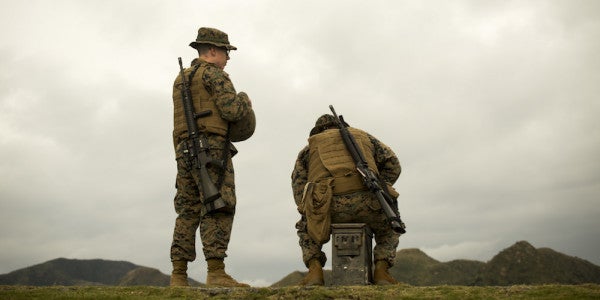 On Monday, the Department of Defense’s Sexual Assault Prevention and Response Office released its report on sexual assault in the military in 2016, the latest annual review submitted to the House and Senate Committees on Armed Services.

But the most striking aspect of the DoD’s report was a new analysis of sexual harassment and social media, conducted between July 2015 and July 2016 and included as a special appendix to the larger report, which centered on production and distribution of sexually explicit media without the subjects’ consent.

According to the Pentagon report, nearly 1.3% of women reported that someone they work with at the DoD “took or shared sexually suggestive pictures or videos of them without their consent” in the past 12 months. That means that of the 207,438 female service members on active duty across the military as of February 2017, at least 2,600 have been subject to some form of nonconsensual exposure. Broken down by branch, 2.3% of female Marines reported this experience, the highest occurrence among the services.

Meanwhile, the DoD report indicated that 0.3% of male DoD personnel, or just over 3,200 male service members, had their photos taken and shared without their consent. Additionally, service members were far more likely to have someone from work simply show them sexually explicit materials — some 4.0% of DoD women and 1.4% of DoD men in 2016.

While the majority of women subjected to these experiences were more likely to notify a military peer or someone in their chain of command, male and female service members who hadn’t experienced that invasion of privacy firsthand felt no strong inclination to report incidents of wrongdoing to commanding officers by others. Additionally, “those affected by the misuse were more likely to believe there was not a formal policy regarding proper use of social media in their office,” according to the report.

More broadly, 29% of respondents who experienced behavior in line with perceived ostracism and maltreatment indicated that it involved some form of social media, indicating that social media is playing a bigger role in hostile workplace interactions than the Pentagon realizes.

The DoD social media appendix is especially illuminating in the wake of the “Marines United” nude photo scandal. In March 2017, an investigation by The War Horse and Reveal News publicized the existence of a 30,000-member strong private Facebook group where users swapped explicit photos and videos of female veterans, active-duty service members, and civilians, which were distributed without the subject's consent.

While the Marines United revelations came almost a year after the DoD conducted its survey, Task & Purpose previously reported that the Facebook group and similar enclaves of sexism and misogyny have existed in the military for years, including the time period encompassed by the Pentagon’s latest report. The report suggests that the non-consensual sharing of explicit photos associated with the group is more pervasive in the armed forces than the Pentagon previously realized.

New efforts to curb digital harassment are now underway to combat the problem. In April, acting Navy Secretary Sean J. Stackley formally declared the non-consensual distribution of explicit images by Navy and Marine Corps personnel a violation of Navy regulations. And the same day the DoD released its sexual assault report, a Marine Corps spokesman announced that at least 30 active-duty troops could face punishment as part as the ‘Marines United’ scandal.

“The drop in prevalence is a step in the right direction, but the military still has a long way to go in ending the epidemic of rape and sexual assault, holding assailants accountable, preventing and punishing retaliation, and eradicating rampant misogyny and harassment within the ranks,” said Brian Purchia, spokesman for Protect Our Defenders, an advocacy group focused on sexual assault in the military, said in a statement Monday.