Confessions Of A Navy Diver 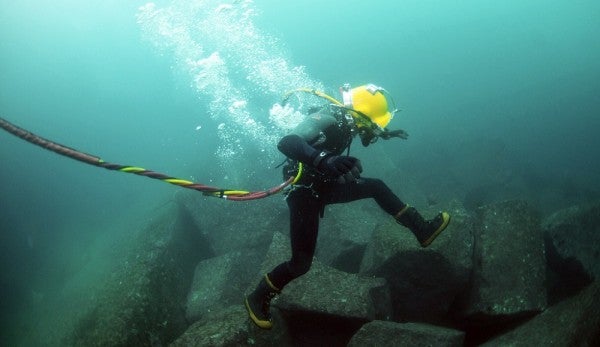 Humans are not meant to be on the bottom of the ocean, or at any depth where you can’t pop back to the surface — or just stand up and walk to the shore. No air, immense pressure, and limited visibility, it’s one of the most inhospitable places on the planet. So it takes a certain mix of bravado, balls, brawn, and brain to operate in an environment that could leave you dead about 20 different ways.

Navy divers like Tommy McConnell have those qualities in spades. They also have a few traditions that set them apart. Such as doling out parting gifts to women they’ve spent the night with.

One tradition dates back to when Navy divers would wear shirts with blue on the outside, and gold on the inside. They’d wear the shirts — with the blue on the outside — when they were in the water during training, and when they were finished, the divers would flip the shirts inside out, so the gold was showing. This is so the diving instructors would know which sailors had completed the event, explains McConnell.

Over the years, it evolved. The divers still get the shirts, but they don’t always keep them, not if they get lucky at least.

“There’s sort of a thing where if we do meet a girl out in town, and if things go well for us, we give ‘em a blue and gold as a token of our appreciation,” says McConnell, who’s been a Navy diver for roughly six years and served two tours, one to the Middle East and one to the Pacific.

“I’ve been married for about four years now, so the blue-and-gold lifestyle has come and gone in my world, but I gotta be honest, I did have a special drawer of blue and gold that didn’t fit me well and those were like my back ups, if things went well,” he says, before quipping: “I had a few disposable ones to hand out.”

Now, say what you will about giving a girl a shirt as a “thank you for sex” parting gift, at least it’s not a pair of silkies that stink like ball sack and medicated baby powder.

Another tradition is the deep sea kiss, which involves two grown men sharing a drink, sort of.

One morning during McConnell’s first deployment, his chief came storming into the sailors’ quarters to read them the riot act. The reason: The ship’s captain received a call from the local bar that the sailors had been kissing each other and fighting.

“So, there’s this tradition among Navy divers, and it's pretty exclusive to us, and it’s kinda weird,” McConnell says. “What we’ll do is we’ll take a shot and hold it our mouth, and basically baby-bird it to a junior guy. That’s a deep sea kiss.”

As for the ass-chewing they received: “That’s actually exactly what occurred,” McConnell says. “We were deep sea kissing and then a scuffle broke out. The funniest thing is that it was actually our petty officer in charge who did it.”