What Makes The F-22 And F-35 Stealth? Proper Skin Care

While pilots of advanced fifth-generation fighters like the Lockheed Martin F-22 Raptor or the F-35 Joint Strike Fighter often claim... 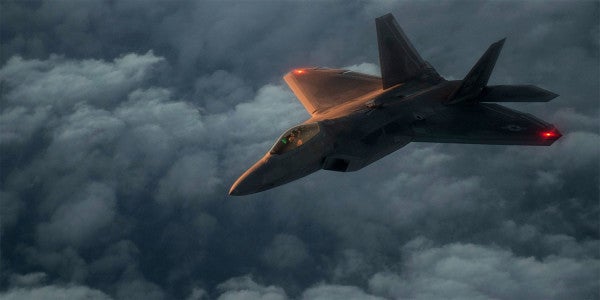 While pilots of advanced fifth-generation fighters like the Lockheed Martin F-22 Raptor or the F-35 Joint Strike Fighter often claim the spotlight, it is the ground crews who maintain those jets’ pristine surfaces that are often the real heroes. Without proper maintenance of their skin, the signature of those advance stealth jets degrade over time—rendering them vulnerable to enemy radar.

“If the pilot’s seen by radar, he can be shot down,” said Senior Airman Joshua Moon, a 192nd Fighter Wing low observables (LO) aircraft structures technician, in an Air Force release issued during the service’s Red Flag exercise in Nevada. “If he isn’t, he can do his mission, go behind enemy lines, and they’ll never even know he was there until it’s too late. Without us, he’s going to get spotted, or shot down, so lives are at risk when it comes to our job.”

While regular maintainers are able to replace part or make other fixes to the aircraft, LO maintainers have the difficult job of even ensuring a fifth-generation fighter remains stealthy after repairs are completed.

“Right now, something is wrong with a light panel on that jet. Since maintenance needs to get into that panel, we have to pick the radar absorbent material off and clean all the fasteners out so they can fix the light,” Moon said. “Once the light is fixed we will re-bind the coating and material again to make it 100 percent ready.”

In fact, in the case of the F-22, the Air Force is very careful about knowing exactly how well the jets’ coating are performing and where exactly they can send the Raptors as a result. “We can give them very good information for what they’re going into, but if their jet isn’t performing the way they expect it to, them knowing that information doesn’t necessarily do them any good,” said Tech. Sgt. William, 1st Operations Support Squadron NCO in charge of intelligence analysis in the Air Force release.

According to the Air Force, Red Flag is an opportunity to put the Raptor and it crews—both in the air and on the ground—to the test in some of most strenuous conditions possible. “An exercise like this provides some of the most realistic training our pilots are going to get, so they really need to be able to depend on that jet performing the way they expect it to, so that they can get those realistic lessons learned,” said William. “The way their jet responds in this environment is meant to be the same it would perform in real combat.”