"There have actually been times when I was unstrapped and unzipped and I get a radio call to respond to a ‘troops in contact.'" 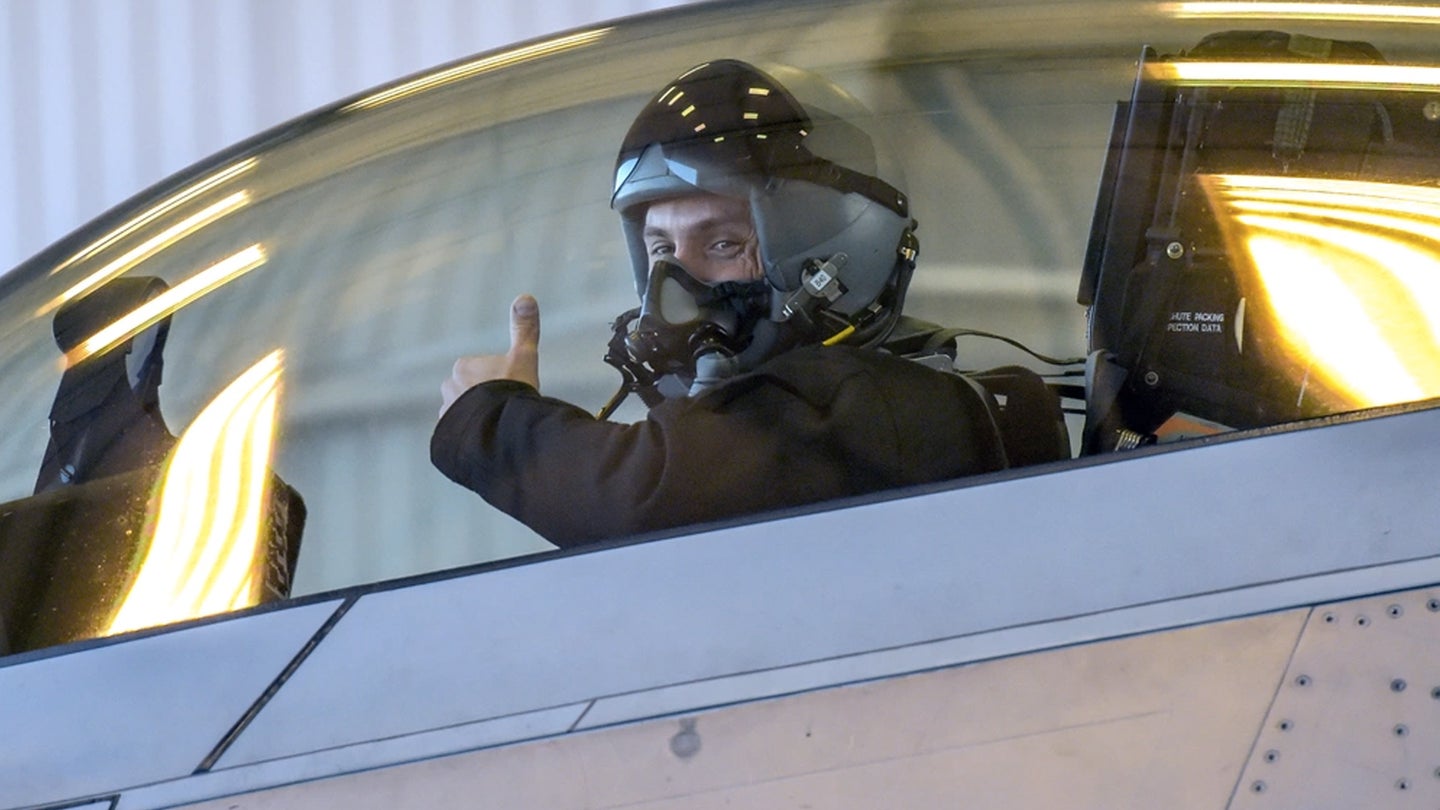 A wise fighter pilot once said that he feels the need, the need for speed. But every so often he also feels the need to pee. Historically, that’s been a tricky piece of work in a cramped fighter jet cockpit, where a parachute harness, full-body flight suit and survival vest make it tough to access the necessary body parts and take a leak without making a mess. But a new “in-flight bladder relief” device being tested by the Air Force might make things easier, especially for female pilots.

Developed by Omni Defense Technologies, “Skydrate” involves a pad for women and a cup for men. Pilots put on the cup or pad beneath a special pair of underwear. When it’s time to go, the pilot connects the cup or pad with a tube leading to a pump outside the flight suit. The battery-operated pump pulls the urine through the tube to a collection bag, where the pee is stored until the end of the mission.

The pump could be an improvement over previous systems, where pilots unzipped their flight suits and peed directly into a plastic bag called a piddle pack. The system was especially awkward for female pilots, some of whom had to shimmy forward onto their seat or raise themselves up to pee into the bag and avoid spillage. Because it’s such a hassle, some women just don’t drink water beforehand to avoid having to pee mid-flight.

“[M]any female aircrew resort to “tactical dehydration” to avoid the difficulties and potential dangers of having to relieve themselves inflight,” the Air Force wrote in a 2020 solicitation for better piddle packs. “During flights, dehydration negatively impacts pilots by lowering their G-tolerance by up to 50%,” and leading to possible headaches, altered vision, and “reduced physical and cognitive performance.”

“It affects everything from reaction time to vision, which of course you want both of those when you’re landing on the ship at night,” Alex Dietrich, who flew F/A-18F Super Hornets in the Navy, told Task & Purpose. “Just like sleep and nutrition, you’ve got to stay hydrated.”

When Dietrich flew the Super Hornet in the early and mid-2000s, she would give her back-seat weapons systems officer (also called a ‘wizzo’) a heads-up, set her aircraft’s speed and altitude on autopilot, shimmy forward in her seat, undo a velcro strap in her flight suit, use a piddle pack, seal it off, then secure it in a saddle bag. That routine worked for her, but she said it worked only because her squadron’s aircrew survival equipment gear shop went out of their way to replace the zipper in hers and other female aviators’ flight suits with velcro, and because they made an extra effort to get non-standard issue female versions of the piddle pack.

“We had such a supportive squadron to come up with this solution, so we made it work and nobody around me had to tactically dehydrate,” Dietrich said. Meanwhile, her male colleagues had it much easier.

“I’d make fun of my wizzo for peeing an hour into the flight,” she said. “Like ‘seriously, you couldn’t have just gone before we took off?’ It was so easy for them.”

At least one Air Force pilot agreed with that sentiment.

“For 99% of missions piddle packs work just fine,” said Trevor “Dozen” Aldridge, a former F-15C pilot who also flew with the Thunderbirds demonstration team. Skydrate, he said, “seems like any other modern military acquisition. Buy something because it’s high-tech, costs a lot more than the alternative, and will most likely under deliver.”

Still, even for male pilots, peeing in a cockpit can sometimes be risky business. Air Force Maj. Justin “Hasard” Lee, an F-35 pilot with experience in the F-16, wrote for Sandboxx that the process was like “driving a car while unwrapping a bag and peeing into it while staying in your lane and avoiding traffic,” he said. “Now take that and amplify it in a 3-dimensional world while flying just under the speed of sound with an enemy that’s potentially trying to shoot you down.”

You need to be in steady flight to use a piddle pack, but sometimes life comes at you fast.

“There have actually been times when I was unstrapped and unzipped and I get a radio call to respond to a ‘troops in contact,’” one anonymous Air Force F-15E pilot said of requests for close air support from soldiers under fire. “Talk about awkward fumbling, trying not to drop a half-full bag of piss on the floor while I point the jet in the right direction and start moving.”

Piddle packs are more than just an inconvenience: they have also cost lives. At least nine fatal crashes involving F-16 fighter jets and an A-10 attack jet were blamed on male pilots fumbling with piddle packs, according to The War Zone. One pilot killed was the friend of retired Air Force A-10 driver Gregg Montijo. The pilot was flying three sorties in one day on January 17, 2002. In between sorties, the pilot ‘hot pit’ refueled on the ground, which is when aircraft are refueled while their engines are still running.

“On one of the ground services, he undid his parachute harness leg straps to use his piddle pack and forgot to hook them back up,” Montijo explained.

The pilot got back in the air and later collided with another A-10. He ejected and cleared the aircraft, but when he separated from the ejection seat and opened his parachute, his lower leg straps were not connected, so the parachute pulled the harness off his body and he fell to his death, Montijo explained.

“Very tragic and sad and totally preventable (both the collision and the subsequent ejection),” the pilot said.

Montijo said piddle packs were not too difficult to use with normal flight gear, but the real challenge was to do it while wearing an anti-exposure suit, a full-length rubber impregnated suit with booties that’s kind of like a diver’s wetsuit.

“You had to wear them for missions over water when the water was so cold, you would not normally survive being in it too long before you die of exposure,” Montijo said. “It had a tiny zipper encased in rubber that you had to manipulate open, then attempt to urinate into your piddle pack without suffering injury or getting wet.”

Accidents always happen, but you’d think after millions of years of urinating, more than a century of military aviation and nearly 30 years of having female Air Force fighter pilots, the Pentagon would find a better solution for mid-flight potty breaks. But while a piddle pack or another device might work fine for some people, others just can’t hang. For example, Dietrich tried using adult diapers at one point, but “psychologically I just couldn’t bring myself to go,” she said.

In 2008, the Air Force bought 300 Advanced Mission Extender Devices from Omni, which appears to be the same company that now makes Skydrate. Much like Skydrate, the AMXD starts with a cup or pad that goes under the flight suit. That device attaches to a hose, which attaches to a pump, which then attaches to a bag. However, the AMXD received mixed reviews from pilots.

“It was over-engineered, like a vacuum,” said Dietrich. “That’s the opposite end of the spectrum from my primitive solution of velcro and a piddle pack.”

The Navy pilot cited another female aviator who said that “the first generation AMXD used six triple-A batteries and was a giant pain in the ass.”

Everyone has their own preferences, but some female pilots appear to still be using piddle packs, as shown by one pilot using it in a 2020 video for Military Times. And there must have been enough of a challenge with existing systems that the Air Force solicited better pee-pee tech in August that same year.

“Addressing female-specific equipment and female aviators’ wellbeing is a top USAF priority,” the branch wrote at the time. “The outcomes of this challenge will help improve retention rates, advance recruitment practices and eliminate gender gaps.”

While the difference between Omni’s old AMXD system and its new Skydrate system were not immediately clear, the new tech seems to be winning the Air Force’s favor. According to the Nov. 30 Air Force news release, Skydrate’s improvements include “a larger collection bag, improved flow rate, multiple hose lengths, one-hand operation for on/off functionality, and more interface (pad) sizes to account for anatomical differences in the wearer.”

Though there are male and female versions of Skydrate, the Air Force said the system was developed with “an emphasis on engineering solutions for female aircrew” and Omni included 30 such aviators and nine pilots in testing, the Air Force wrote. One female pilot is glad to help out.

“It’s important to provide feedback because it’s that feedback that drives change,” said Maj. Nikki Yogi, an F-35A fighter pilot who participated in the Omni device tests, in the press release.

Yogi at one point had “a poor experience” with a mid-flight urine device while deployed as an A-10 pilot in 2017, the release said, but as a junior pilot she did not immediately raise the issue. She doesn’t want future women to go through the same thing.

“A pilot should be focused on taking the fight to the enemy, not on whether their bladder relief device is going to work or be comfortable to use,” she said.

Hopefully Skydrate can provide the solution. The Air Force is scheduled to receive its first shipment of the device this month, though the press release also said that “aircrew will have access to Skydrate by Spring of 2022.” Meanwhile, the service is still reviewing proposals from other companies “which are expected to field within the next year.”

The more options the merrier, because some people just pee differently.

“This isn’t earth shattering stuff, but it’s important on longer missions,” the F-15E pilot said, “especially when we’re trying to diversify our fighter force (in regards to gender) … The fact that it’s taken this long to get something better for them is …unfortunate, to say the least.”