The Air Force is looking at the Army's new M17 Modular Handgun System as a potential sidearm for its pilots,... 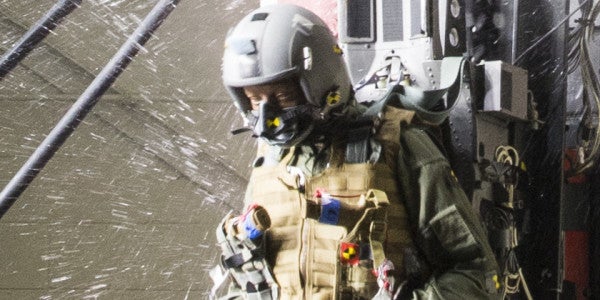 The Air Force is looking at the Army's new M17 Modular Handgun System as a potential sidearm for its pilots, replacing the Beretta M9 and SIG Sauer P226 pistols. But those decisions require research, so the service ordered up a unique test: Send that sucker off in an ejection seat and see what happens.

On Dec. 6, the branch’s Operational Test and Evaluation Center at Wright-Patterson Air Force Base in Ohio strapped a test dummy into an ejector seat with two M17 pistols holstered across his chest before slamming the rig into the bottom of a vertical deceleration tower at the 711th Human Performance Wing. The purpose: to ensure the new handgun doesn’t pose any safety problems to occupants of the conventional Martin-Baker ejection seat.

A test dummy equipped with a new Modular Handgun System makes impact at the bottom of a vertical deceleration tower inside the 711th Human Performance Wing, at Wright-Patterson Air Force Base, Ohio, Dec. 6, 2017.Photo via DoD

“The test addresses the new modular handgun system’s capability to resist damage during ejection and still function as designed after sustaining ejection forces,” an Air Force public affairs official wrote. “This is the first time any service has conducted this type of demonstration to ensure a sidearm is safe for aircrew to carry in ejection seat aircraft.”

First fielded by the Army’s 101st Airborne Division at Fort Campbell, Kentucky, under the designation M17, the SIG Sauer P320 trumped Glock’s proposed Army service pistols and immediately caught the eye of other service branches. In May, Department of Defense officials claimed that the Navy was interesting in 61,000 M17s and the Marine Corps wanted 35,000… but the Air Force planned on snapping up a whopping 130,000 pistols.

The testing is no joke: As Guns.com notes, the standard Martin-Baker underseat rocket-assisted catapult system can subject pilots to forces up to 14g — fast enough to expel military personnel from a cockpit under any circumstances, but also aggressive enough to bruise shoulders and fracture bones. And the last thing any aviator wants is their bulky new sidearm getting caught on something during a bailout.

Those concerns are especially salient for the Modular Handgun System. In January, a police officer with the Connecticut Police Department’s Special Response Team filed a $7 million lawsuit against Sig after he claimed he was injured by his P320 in an accidental-drop discharge. The following August, two videos emerged that show the pistol’s trigger depressing due to inertia, tripping the firing mechanism and resulting in accidental discharges. And on Aug. 8, the Dallas Police Department also announced it was removing the P320 from the department’s approved-carry list, pending an investigation into whether the pistol accidentally fires when dropped.

It’s likely that accidental discharges are on the Air Force’s mind as well: One of the photos published by the branch on Dec. 7 shows force-protection program manager Master Sgt. Samuel Pruett checking an empty shell casing from the M17 for any indication the firing pin struck the primer during the tests.

U.S. Air Force Master Sgt. Samuel Pruett, Air Force Operational Test and Evaluation Center force protection program manager, based at Eglin AFB, Fla., checks an empty shell casing from a weapon for signs of the firing pin striking the primer at the conclusion of a test at Wright-Patterson Air Force Base, Ohio, Dec. 6, 2017.Photo via DoD

There’s no word yet on the outcome of the tests. But even if the Air Force isn’t as hot on the M17 as Army soldiers were last month, it still seems likely the sidearm will end up in the holsters of aviators everywhere. After all: As far as ejection-related deaths go, the risk of an accidental discharge seems preferable to an execution by canopy: