The Army’s Brand New Handgun Already Has Some Major Problems

Just over a year after the Army selected Sig Sauer’s P320 9mm pistol for its new XM17/18 Modular Handgun System... 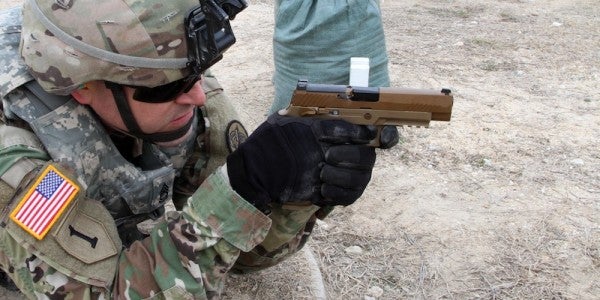 Just over a year after the Army selected Sig Sauer’s P320 9mm pistol for its new XM17/18 Modular Handgun System program to replace the Beretta M9, the branch’s new sidearm is showing some serious problems, according to a new Department of Defense report released this month.

The Pentagon’s overview on its gear and tech programs in 2017, conducted by the Office of the Director of Operational Test and Evaluation and released earlier in January 2018, indicated that both the XM17 and XM18 pistols demonstrated a series of persistent problems, including accidental discharge, ejecting live ammunition, and relatively frequent stoppages when firing ammunition encased in a full metal jacket. Even worse, the report recommends the Army engineer some fixes “upon identification of the root cause” of the ejection issue — a statement that indicates the branch hasn’t yet identified the source of the issue.

This could be a big problem for the Army, which started fielding the new pistol on Nov. 28 with the 101st Airborne Division at Fort Campbell. As part of its 10-month rollout, the Modular Handgun System will head downrange with soldiers assigned to the critical 1st Security Force Assistance Brigade when the experimental new battalion deploys to Afghanistan in the spring. And though the report notes that the ammo stoppages “had minimal operational impact on the operators’ ability to fire and continue the mission,” the presence of errors may make some soldiers deploying with the new sidearm nervous.

It’s likely, however, that one of Sig Sauer’s competitors will end up more steamed than the Army itself. Shortly after the branch awarded its $580 million Modular Handgun System contract, program contender Glock filed a protest with the U.S. Government Accountability Office claiming that U.S. Army Materiel Command “improperly failed to complete reliability testing” on Sig Sauer’s compact XM17 entry. The complaint was thrown out, but the GAO’s judgment in June 2017 suggests that the branch ended up selecting Sig Sauer’s entry due to its relatively lower price point for a two-gun proposal that offered “overall the best value to the government.”

It now appears that the Army is getting what it paid for. Safety defects like those reported by the Office of the Director of Operational Test and Evaluation have cropped up in the months between the GAO’s decision in June and the pistol’s initial fielding in November. Several videos posted online show the commercial Sig Sauer P320 firing when dropped, a defect that first became evident in January 2017 when an experienced officer with the Connecticut Police Department’s Special Response Team was shot in the left leg after his pistol discharged upon hitting the ground.

How the government report will affect the fielding of XM17 and XM18 to soldiers remains to be seen, but the impact of the report won’t stop with the Army: In May, Pentagon officials stated that the Navy, Air Force, and Marine Corps were interested in adopting more than 220,000 M17 pistols between the three of them. Hopefully, the Pentagon will figure out what’s wrong with its vaunted new handgun before fielding the sidearm to military personnel beyond the Army.