After decades with nothing but pistols to defend themselves with in the event of a successful ejection over enemy territory, Air Force pilots are officially rocking compact versions of a rifle that the U.S. military has used since Vietnam 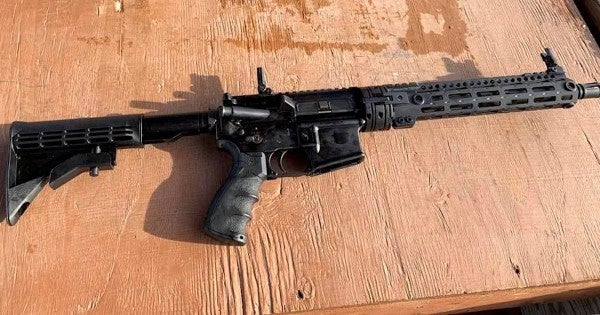 After decades with nothing but pistols to defend themselves with in the event of a successful ejection over enemy territory, Air Force pilots are officially rocking compact versions of a rifle that the U.S. military has used since Vietnam.

In the last month, airmen have started receiving the GAU-5A Aircrew Self Defense Weapon, a heavily-modified version of the shortened 5.56mm M16 derivative that U.S. service members once brandished in the 1960s as the CAR-15 or “Colt Commando”

The new ASDW, which comes with four 30-round magazines, is based on Colt's current M4 platform and outfitted with a “modified quick-release barrel” designed by tactical firearms company Cry Havoc for an effective range beyond 200 meters, as Air Force Times reported in June 2018.

Produced explicitly for inclusion in the new new ACES II survival kit, the GAU-5A ASDW measures just under 16 x 14 x 3.5 inches and was to be assembled by hand in under a minute, Air Combat Command officials told Air Force Times.

The Air Force first announced its intent to arm pilots with the new ASDW back in June 2018, and a handful of lucky airmen finally managed to get their hands on the new rifle this spring.

An April 2019 Facebook post from the 3r Wing showed F-22 Raptor pilots at Joint Base Elmendorf-Richardson in Alaska getting up close and personal with their new rifles.

While the [GAU-5A] was designed “for all combat-coded ejection aircraft,” as Air Combat Command spokeswoman Maj. Docleia Gibson previously told Air Force Times, it's worth noting that Air Force pilots will likely have a backup pistol handy as well.

As Task & Purpose previously reported, the Air Force was eyeing the Army's new Modular Handgun System as a potential replacement for the Beretta M9 and SIG Sauer P226 pistols as pilot sidearms, separate from the firearm included in the ACES II survival kit.

Back in December 2017, Air Force's operational testing and evaluation officials at Wright-Patterson Air Force Base in Ohio outfitted a test dummy with two M17 pistols holstered across his chest before slamming it into the bottom of a vertical deceleration tower at the 711th Human Performance Wing to ensure the new handgun doesn't cause issues during an ejection.

Either way, the GAU-5A ASDW will certainly add a much-needed firepower boost for airmen shot down behind enemy lines — at least, until their Ubers arrives.