They both carry stuff, but the C-130 is way better at it. 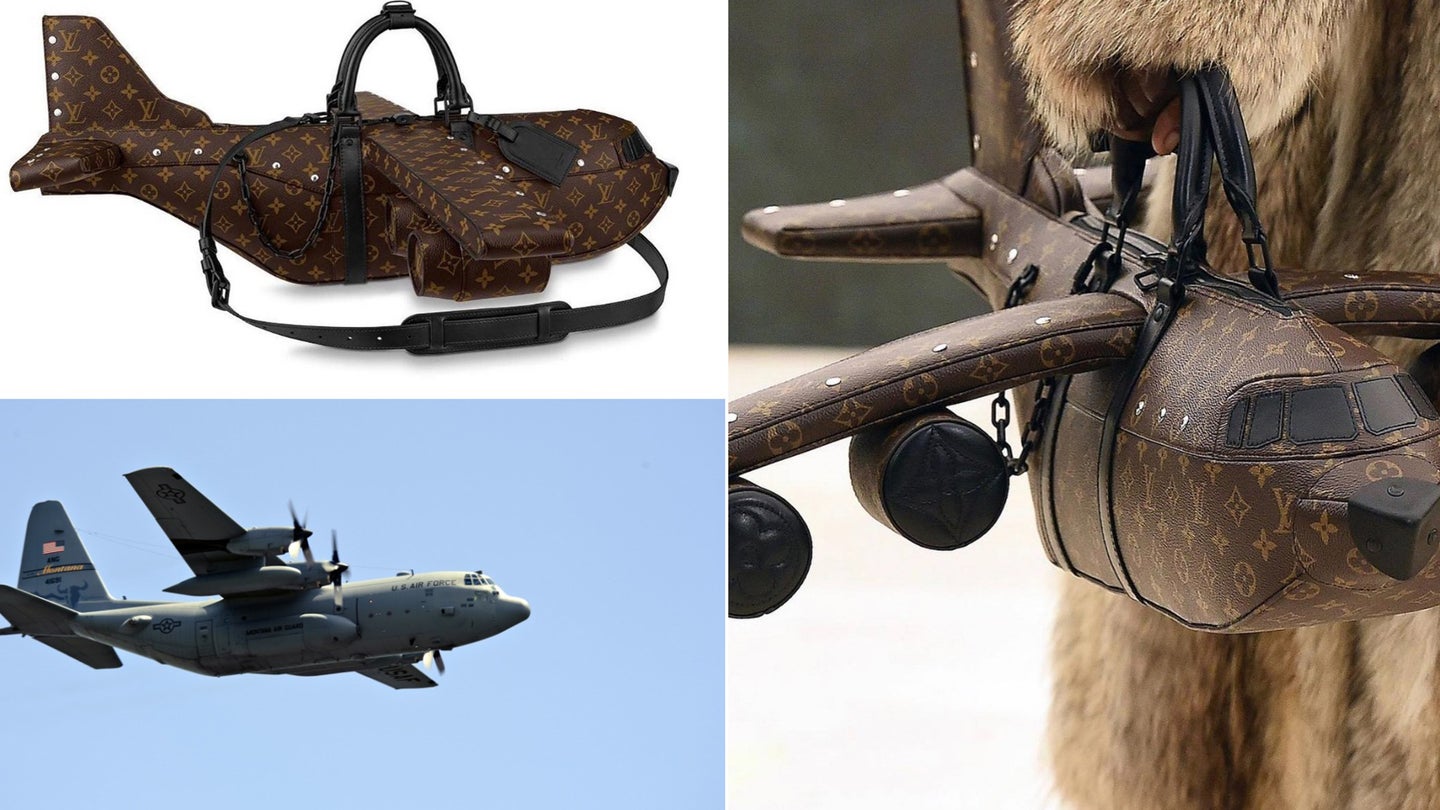 Aviators, maintainers, aircrew, answer me this: How is your wardrobe these days? Sure, the Air Force now allows maintainers to wear shorts on the flight line, but do you ever feel like your outfits are missing something?

Have no fear, because Louis Vuitton is here with a vaguely C-130 Hercules-shaped handbag which, at $39,000 a pop, costs half an actual Air Force pilot’s annual salary and even more than half of your average enlisted airman’s salary. But hey, pretty hurts, am I right?

To be clear, calling this accessory a ‘C-130-styled handbag’ is just a guess. While there are several features the handbag shares with the Air Force’s multirole cargo aircraft — including four underwing engines, high straight wings, multiple separate windshield panes, a blunt nose, conventional tail, and boxy, aft-loading cargo compartment — the handbag is missing one key feature: propellers! The Air Force did try to mount rockets to a C-130 in 1980 to rescue American hostages in Iran (the idea failed when the modified C-130 crashed during a test flight), there are no jet-powered C-130s that I am aware of. Please let me know in the comments if I’m wrong though!

Could the handbag be based on the Air Force’s jet-powered cargo aircraft, such as the C-17 Globemaster or the C-5 Galaxy? Possibly, but it seems to have even less in common with those aircraft. Most notably, the handbag lacks the T-tail and swept-back wings found on those larger cargo planes, as well as the bent wingtips found on the C-17 and the generally longer fuselage of the massive C-5. So my best guess is that this is a Louis Vuitton-painted C-130 in the midst of a propeller upgrade.

If I’m right, then fashion designer Virgil Abloh could not have chosen a better aircraft for an accessory that’s made for carrying stuff. The C-130 has flown with the Air Force since 1959, and it has served in almost every major and minor American conflict over its 62-year career. The C-130 can hold up to 42,000 pounds of troops, supplies, and vehicles. It can push that cargo out for a mid-flight airdrop or land on a rough, dirt strip in the middle of nowhere. The C-130 can also be modified and configured for a huge range of missions, hopefully in the same way a handbag can go with a wide range of outfits and occasions. For example, the aircraft has been modified to serve as death-spitting gunship, an aerial refueling tanker, a storm-chasing weather plane, and tons of other roles. It can do anything from fight fires to land on snow. So yeah it’s a badass, and if the $39,000 handbag can’t do a third of these things then their customers have been thoroughly swindled. That said, if you’re spending tens of thousands of dollars on a bag, you’re probably too rich to care about any of that.

Still, despite the common mission set that the C-130 and the handbag share — which is to carry stuff around — the two differ in one major way: Unlike a flashy, ludicrously expensive Louis Vuitton bag, the C-130 was built “utilitarian as a bucket and just as plain” according to Air & Space Magazine. Specifically, it was built to fill the mid-range gap between the military’s existing short and long-haul aircraft, and with very little maintenance.

“It was designed to be used in a tactical situation where there weren’t any nice, clean places to take care of it,” said Willis Hawkins, who was working with Lockheed Martin’s advanced design department when they first built the C-130. “Propellers were high to keep the power plant out of the dust and dirt. Narrow undercarriage so you could operate from roads. Getting paratroopers out, dumping loads, dictated where to put the doors.”

There’s a reason why the aircraft was named after Hercules, the Roman equivalent of the Greek divine hero famous for his strength: It’s strong as hell and tough as nails. The C-130 or its variants carried 452 people fleeing Vietnam in a single flight at the end of that war in 1975; landed on an aircraft carrier in 1963; caught satellites falling out of the sky; brought countless tons of food and medical supplies to disaster zones over the decades; and searched for troops or hikers stranded in every clime and place. And the Air Force is still buying more of them.

What can the Louis Vuitton handbag do? Sit around and be gawked at, I guess.

All of which is to say that, while the C-130 and this handbag both carry stuff, it’s a paradox to model something so indulgent and wasteful as a $39,000 handbag after an aircraft that has done so much with so little attention to comfort or style. (The back of the Herc is a rough ride, so I’ve heard.)

Maybe Virgil Abloh was aware of this paradox when he included the handbag in his Men’s Fall-Winter 2021 Show. After all the show is aimed at “investigating the unconscious biases instilled in our collective psyche by the archaic norms of society,” according to the show website. But I doubt it. Otherwise, he would have included the propellers.

Related: How to dress like you ‘wanted to join the military, but…’