That ‘mysterious fire’ at 1st Battalion, 6th Marines HQ resulted in $100,000 of damages, and is officially ‘suspicious’

Last month the rumor mill was abuzz with stories of disgruntled Marines setting fire to 1st Battalion, 6th Marines' HQ. Now we know how big the fire really was. 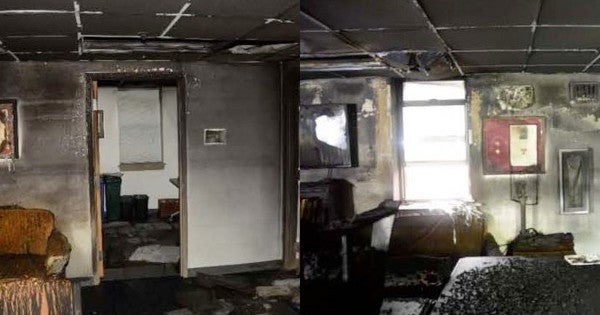 Last month the rumor mill was bursting with stories of a Marine (or several) with 1st Battalion, 6th Marines, who set fire to part of their battalion HQ. Though Task & Purpose received multiple messages and emails from Marines claiming to be with the Camp Lejeune, North Carolina-based battalion, not much could be confirmed by Corps officials, due to an ongoing Naval Criminal Investigative Services investigation into what we, and other publications, quaintly referred to as a “mystery fire.”

Now, we can shed a little more light on what happened. For starters, the Feb. 11 fire is officially “suspicious,” according to an NCIS bulletin posted to Camp Lejeune's official Facebook page, as Marine Corps Times' Shawn Snow first reported.

In the early morning on Feb. 11, Marine Corps Base Fire Department personnel responded to a “water alarm” originating from building HP-111, where 1st Battalion, 6th Marines is headquartered, reads the bulletin. When they arrived, they found the source of the alarm was — judging by the NCIS photos — a pretty significant fire.

The blaze took place in what appears to be the unit's command deck, based on this reporter's hazy memories of what it looked like when he was an attachment there, pre-scorching, and what Marines in the unit have told Task & Purpose.

Though the fire was put out, it caused significant damage, estimated at more than $100,000, including “several years of command memorabilia,” according to the bulletin.

No one was injured as a result of the fire, and no motive for the alleged arson has been officially confirmed by the Marine Corps, or NCIS.

When the news first broke in February, Task & Purpose was contacted by Marines from the base claiming it was the act of one (or several) disgruntled members of the battalion, allegedly upset over the tempo of training exercises, while others told Task & Purpose that it was due to frustrations with their command.

For now at least, those unconfirmed claims fall in the category of rumor mill.

Due to the “suspicious nature” of the fire, the NCIS investigation is still ongoing and they've gotten support from Jacksonville's Public Safety Crime Stoppers program, which is offering a reward for information on how the fire began, who did it, and, well, the usual details you want when solving a crime.

“Crime Stoppers offers cash rewards up to $2,500 for information deemed of value or assistance to law enforcement,” reads the note on Camp Lejeune's Facebook page. “Callers to Crime Stoppers are not required to reveal their identities and rewards are provided through a code system.”

SEE ALSO: I went down a rabbit hole chasing a rumor about a Marine who tried to set the battalion HQ on fire. Here's what I found out