'Captain Marvel' ​blasted across movie screens around the world with a blockbuster opening weekend, and the film's directors say they owe a debt of gratitude not just to the Air Force, but to a fallen Thunderbird pilot 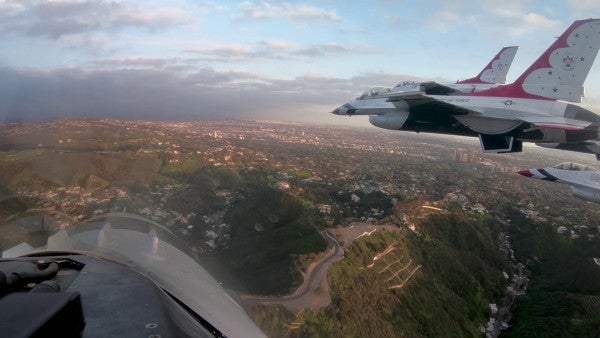 Captain Marvel blasted across movie screens around the world with a blockbuster opening weekend, and the film's directors say they owe a debt of gratitude not just to the Air Force, but to a fallen Thunderbird pilot.

Thunderbirds pilot Maj. Stephen “Cajun” Del Bagno, one of the many Air Force personnel enlisted to consult on the portrayal of Captain Carol Danvers' aviation chops, was killed in an April 2018 crash at the Nevada Test and Training Range at Nellis Air Force Base just a week after consulting on the movie, according to Air Force Times.

An October report on the fatal accident occurred after Del Bagno lost consciousness due to extreme G-forces while practicing an aerial maneuvers with five other elite Thunderbird pilots in his F-16CM Fighting Falcon.

“The merger between his positive personality and pilot skills made him a 'perfect fit for the Thunderbirds' mission to recruit, retain and inspire,” the report said. “A member of his squadron summed up [Del Bagno] as 'just a beautiful human being.'”

“[Del Bagno] embraced us, wanted so much to teach us about the culture of the Air Force, loved that culture so much, taught us to appreciate it in a way that we wouldn't have otherwise,” director Anna Boden told Air Force Times in a February interview. “I just can't explain how meaningful it was. He touched a lot of people on our set in the short time that he got to spend with us … and it was a very, very, very sad day when we found out and had to let everybody know.”

Captain Marvel star Brie Larson, who portrays Danvers and spent a significant amount of time at Nellis immersing herself in the Air Force's unique culture, posted her own tribute to Del Bagno on Instagram shortly after the accident.

“You were a brilliant pilot and an even better person,” she wrote. “When you talked about the Air Force; the adventure, the rituals, the community – I felt your passion and purpose … There is no Carol without you.”

Captain Marvel is dedicated to Del Bagno's memory, but his impact on the film extends beyond his work with Boden and Larson. Del Bagno has a brief cameo alongside Danvers during a rambunctious game of Crud (“a fast-paced, alcohol-soaked variant of billiards popular with fighter pilots,” per Air Force Times) at her squadron's local bar during a flashback sequence.

As for the Thunderbirds, a six-aircraft delta formation performed several flyovers on the Monday before Captain Marvel's to both promote the movie and honor Del Bagno

“This flyover is a unique moment to honor the men and women serving in the Armed Forces who are represented in Captain Marvel,” Thunderbirds Commander and lead pilot Lt. Col. John Caldwell said in a statement. “Being part of this event is a tremendous opportunity, and we look forward to demonstrating the pride, precision and professionalism of the 660,000 total force Airmen of the U.S. Air Force over the city of Los Angeles.”

“Executing this flyover is a fitting tribute to Cajun,” Maj. Matt Kimmel, who consulted alongside Del Bagno on Captain Marvel, added. “He lived to share his passion for aviation with everyone he met and always left you with a smile. We carry his legacy each day and can't wait to make him proud by showing off his U.S. Air Force and his team in his backyard.”

SEE ALSO: 'Captain Marvel' Is Here To Punch You In The Face And Energy Blast Your Ass Right Into The Nearest Air Force Recruiting Office

WATCH NEXT: 'Captain Marvel' And The Air Force