"It’s all building blocks to be ready for any type of fight you find yourself in." 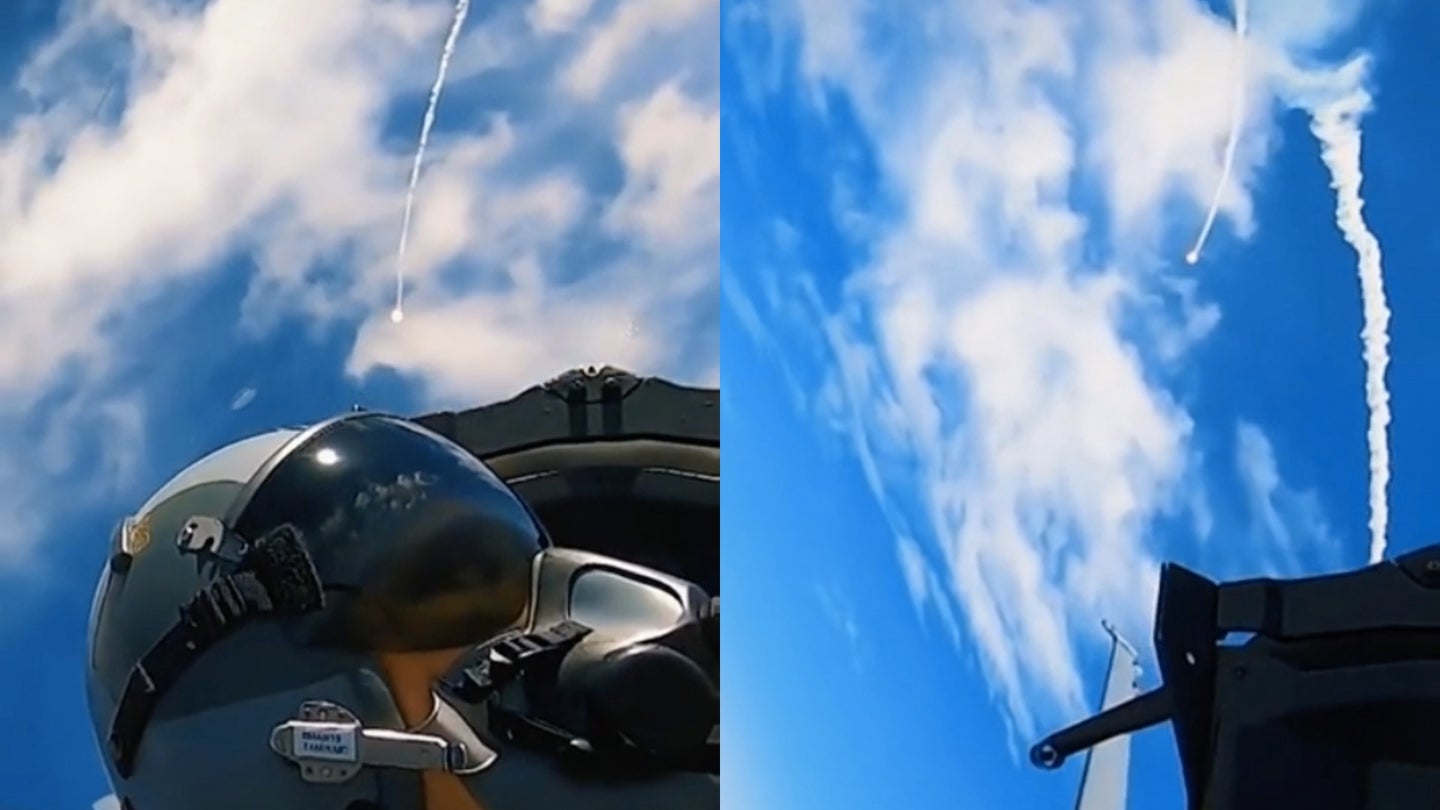 It doesn’t take a trained pilot to appreciate the cool factor of a recent TikTok video showing Air Force F-15E Strike Eagle fighter jets chasing each other over the desert outside Nellis Air Force Base, Nevada. The video, shot from the cockpit facing the Eagle’s backseat, was viewed more than half a million times on TikTok and shared on the unofficial Air Force subreddit, where readers left more than a hundred comments with questions like what kind of aircraft are flying and why is the tail shaking so much in the wind?

Like the need for speed, this reporter felt the need for answers. It turns out the video, which was first shared on the popular TikTok page Combat_Aviationist, has already made the rounds among the Air Force’s F-15 Eagle pilots, a few of whom think it’s a cool illustration of how fighter pilots train for air-to-air combat.

“Anything beyond that really turns into high-aspect [basic flight maneuvers], which we also practice,” Aldridge said. “It’s all building blocks to be ready for any type of fight you find yourself in.”

Basic fighter maneuvers teach more than just maneuvers though: they also teach aircrew how to feel the aircraft. As can be seen in the video, when the adversary is within visual range, fighter crews spend a lot of time looking out the canopy keeping track of them. That requires a skillset all its own, because pilots have to feel what’s going on with their airplane without wasting time looking down at their instruments.

“I want to max-perform the Eagle by feel and noise without having to look inside the cockpit,” said Drew Armey, another F-15C pilot. “Not looking inside at gauges, that’s a skill versus instrument flying, when you’re eyes-inside.”

Keeping an eye on your enemy is just the start: sometimes to survive an air-to-air battle, you almost have to read your opponent’s mind. The TikTok shows an F-15 closing on the videographer’s tail, close enough that the approaching pilot can use his or her guns on the defending aircraft. But shooting a fast-moving aircraft from another fast-moving aircraft is a tricky business: if the pilot does not lead the target enough, he or she will miss. That fact gives the defending pilot another set of decisions to make, Armey explained. If the bandit’s nose is pointing right at the defending jet, it could mean that they don’t have a shot, because attacking pilots need to lead their targets. However, it could also mean that the bandit wants the defending aircraft to jink away so that he or she can get a lead on its target.

The attacking pilot must make similar calculations: if he or she gets close to the enemy, the pilot has a better chance of hitting the enemy with his or her gun, but the pilot will also be at greater risk of the defender out-maneuvering and becoming the attacker.

“There’s some gamesmanship of showing the defender this picture where they want to maneuver their jet, and into your sights,” Armey said. “This is the knife edge of performance.”

Making these judgments and decisions is a skill that basic fighter maneuvers like the ones shown in this TikTok are meant to help fighter pilots hone. But the specifics of what’s going on in this particular video are a little harder to pin down, especially because the video seems to be of multiple fights spliced together. The first fight looks like either a 6k basic fighter maneuver engagement that turned into a 3k, or the start of a 3k, Aldridge said. The Strike Eagle with the camera likely started defensive, with the other aircraft starting on its tail and staying there, he added.

As the chase goes on, the video shows smoke appearing off the lead aircraft’s wing. Those are from flares that the Eagle is throwing out to keep the adversary from launching heat-seeking missiles, Aldridge explained. But flares can’t throw off guns, which is why the lead aircraft has to jink and turn to keep the attacking aircraft from drawing a bead.

“The second fight it looks like he initially does a break-turn before going downhill,” Aldridge said. “This is a standard 6k defensive gameplan, break until the bandit proves they can out-break you, then change the game plan and in this case take it downhill.”

The tactics change based on how close a pilot is to his or her adversary.

“In a more distant fight I can keep them too far away, keep them out of gun range,” said Armey. “If a bandit is close to me, my ability to get away is pretty low, but if they’re being aggressive and make a mistake I can cause that closure to make them overshoot.”

The TikTok shows that closure and overshoot at around 27 seconds in, after the first jet cuts across the pursuing jet’s path.

“You see the defender pulls into the offender, who goes shooting by, that’s him causing closure,” Armey said.

Still, another pilot with 1,400 hours’ experience flying F-15s said the TikTok was less about teaching tactics and more about looking cool.

“Haha, very funny,” said the pilot, when asked if the video was meant to show defensive maneuvers for the Strike Eagle. The pilot spoke on the condition of anonymity because he was not cleared to speak with the press.

“Illustrating the defensive maneuvers on a Strike is kind of like illustrating fuel efficiency on an Abrams tank,” the pilot said. “So no. It’s just meant to look cool. Strike Eagles are pigs in the visual arena.”

By “visual arena,” the pilot means a fight where the crews of the opposing aircraft can see each other. Air-to-air missiles with active radar homing systems allow pilots to shoot missiles at each other from over the horizon. But if the missiles are not working, or if a pilot has no more missiles left on his or her jet, then it’s up to their skill with a gun. Basic fighter maneuvers help teach that skill, though the anonymous pilot believed the aviators in the TikTok were putting on a show rather than a fight.

“The video looks quite staged,” the pilot said. “The offender in the video settles into a sweet gunshot position for several seconds at a time, meaning the defender would have been dead multiple times by the end of the video.”

Armey was not so certain: he couldn’t get a close enough look to see whether the attacker had the defender dead to rights. However, he knew for certain that it was a pretty cool video and more accurately represents air-to-air combat then, say, the 1986 hit movie “Top Gun.”

“I love that movie, but they’re flying way too close to each other, it’s basically formation flying,” Armey said. “I get it from a cinematic perspective, because it’s hard to capture what’s going on when the fighters are 6,000 feet away from each other, and even that’s close.”

Part of what makes the TikTok stand out is the unusual angle of the camera looking behind the aircraft as the fight goes on. Most debriefs use footage facing out from the front of the jet, Armey explained, so this TikTok serves up a fresh take on how to pick apart a gunfight.

“This is actual footage of how they’re fighting, so it’s much more representative in that sense,” compared to Top Gun, he said.

Another feature of the TikTok that Hollywood might not show is the lead aircraft’s tail shaking in the wind. The wobbling vertical stabilizer drew concern from TikTok commenters who worried it was about to snap off, but it’s normal for a fighter tail to shake like that.

“The vertical stabilizer on both Eagle models does vibrate massively under high angle of attack,” said the anonymous pilot. Angle of attack is tricky to explain, but the key concept is to keep the wings of an aircraft below a certain angle relative to the wind to make sure the wings continue to produce lift, without which the aircraft will stall. The Eagle is shaped in such a way that the fuselage itself generates a massive amount of lift, the pilot said, which leads to air vortices and turbulence directly over and behind the jet.

“This does lead to those vibrations you see on this video, and are also the reason the Eagle has two tails instead of one central one,” he explained. “The air is just too disturbed and turbulent in the middle, so the tails have to be offset to the sides to keep them effective.”

Shaking is normal on other aircraft too, even civilian airliners. Armey flew F-16 fighters before switching to F-15s, and he remembered watching the missiles beneath his wing “flopping up and down in the wind.” Air resistance is part of why fighter jets are not built with super-rigid materials, which might snap under such force, Armey explained.

As fun as the video is to watch, social media reminds us that it can always be better.

“Waiting for pilot to eject with rocket launcher in hand,” wrote one Reddit user, referring to a legendary video game stunt.