"Your color is who you are." 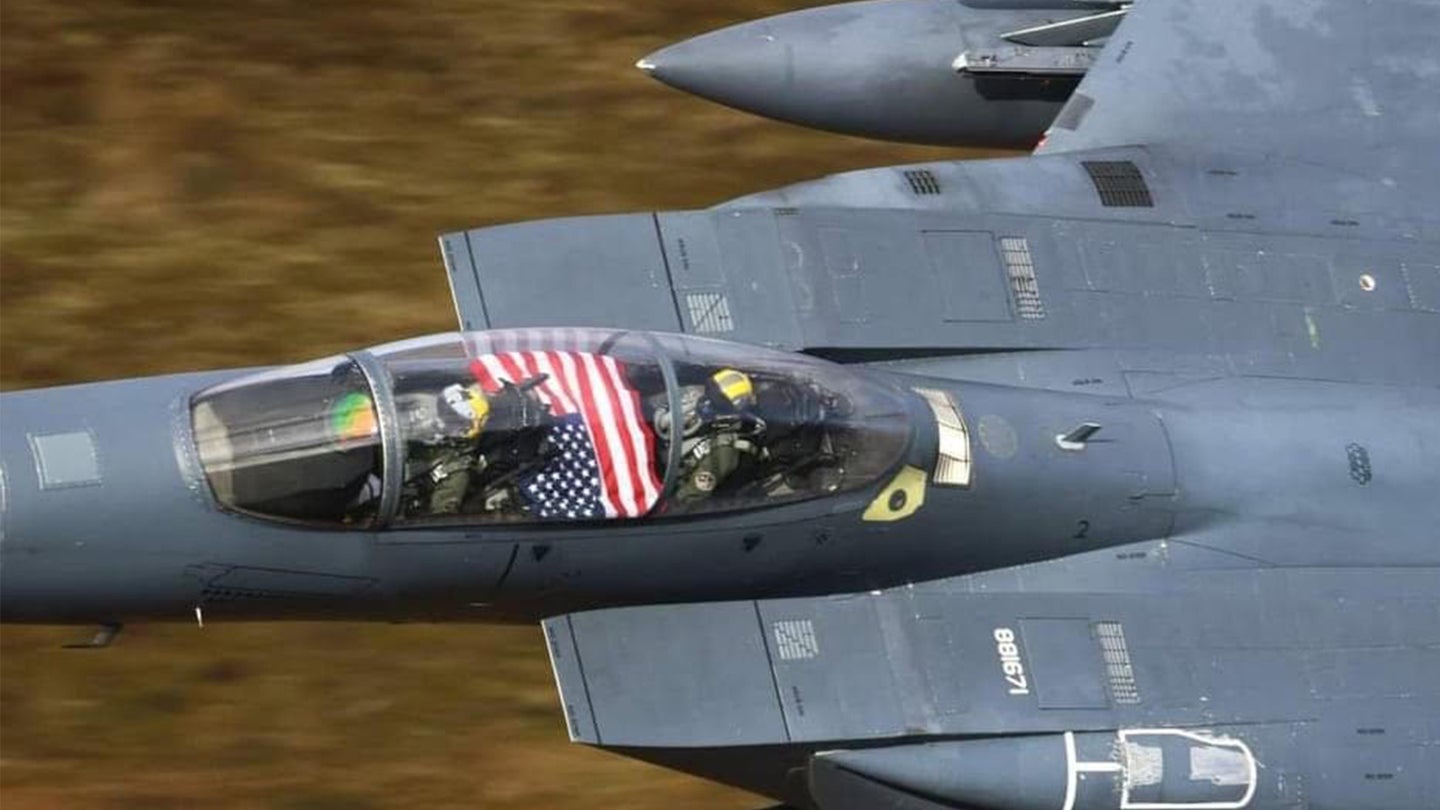 Air Force fans are used to a lot of grey. Grey jets, grey helmets, and sometimes grey skies overhead as the jets blast off down the runway. That’s why when the branch posted photos on Facebook of airmen wearing bright yellow helmets as they strapped into the cockpit of their F-15E Strike Eagle last week, the color really popped.

But that flash of color is not just there for style. In fact, it’s part of decades of tradition at the 336th Fighter Squadron, also called, “The Rocketeers,” which has a rich history of defending America going all the way back to World War II.

“Your color is who you are,” said retired Air Force Col. James Jinnette, whose first unit was the 336th and who eventually became the squadron’s operations officer, the second in command. Jinnette explained that the 336th is one of four fighter squadrons in the 4th Fighter Wing, each of which has its own color: red, yellow, blue, and green. In the wing, squadrons will refer to each other by their color, as in “how’s yellow doing, or what’s green up to,” he said.

That pride is rooted in the squadron’s accomplishments over the past 80 or so years of combat flying. Ironically, in the first few years, the squadrons were not even part of the U.S. military. Before the U.S. entered World War II, American volunteers traveled to the United Kingdom to fly against Nazi Germany in the Royal Air Force. The units of Americans were called Eagle Squadrons, and when the U.S. finally entered the war, the squadrons were transferred to the U.S. Army Air Forces, where they formed the 4th Fighter Group in September 1942.

“The group was credited with the destruction of 1,016 enemy aircraft, more than any other Army Air Force unit, and produced 81 aces,” wrote Dr. Roy Heidicker in a history of the 4th Fighter Wing.

At the time, the group had only three squadrons, the 334th, 335th and 336th, and they continued to fly with distinction in Korea. In that conflict, the group flew sleek F-86 Sabre fighter jets and destroyed 502 enemy aircraft, 54% of the total destroyed by the entire U.S. Air Force, Heidicker wrote. Not only did they pass the conflict with flying colors, but each squadron began to embrace their own colors too.

“Yellow became the official color of the unit prior to the Korean War, as did the name ‘Rocketeer,’” wrote the 336th’s current operations flight commander and squadron historian Capt. Michael “Tackle” McCloskey in an email to Task & Purpose. “The emergence of jet fighters into the inventory sparked a name change that has lasted over 70 years and is now synonymous with the slogan ‘World Famous.’”

Jinnette said he wasn’t sure why yellow in particular became the 336th’s color, but the squadron has rocked it ever since, even going so far as to call their exact shade “rocket yellow.” At first, members of the 336th wore yellow scarves, but that eventually gave way to wearing yellow t-shirts beneath their flight suits on Fridays, Jinnette said. Look up images of the 336th online and you’ll see that their F-15Es have yellow flashes at the top of their twin vertical tails and on the fuselage beneath the cockpit. Keep Googling and you’ll see images of aircrew wearing yellow trucker hats, and even one shot of members of the 336th Rockettes, the unit’s spouses club, wearing yellow dresses at the airstrip in 2009 when the squadron came back from Afghanistan.

Jinnette said that at Seymour Johnon there were also yellow benches, signs, nametags, and even a beat-up community car painted bright yellow for the squadron’s use. Interestingly enough, the color “Bold Yellow” is assigned the number 336 on the Benjamin Moore website.

“That’s our identity,”Jinnette said. “We’re all trying to do the mission as best as we can, and part of that is the morale, esprit de corps, and history you’re attached to.”

But despite being all over the squadron in many other ways, yellow has not graced the pilots’ helmets until recently. Air Force aviators sometimes customized their helmets during the Cold War, Jinnette said, but over the past few decades the rule has been to keep the HGU-55/P helmets as grey as they were in the factory. That changed in early 2020, when the Air Force approved aviators to wear colorful helmet wraps, leading to a wave of bright helmets evoking those worn by Maverick and Iceman in the 1986 classic “Top Gun.”

It’s easy to guess what color the crews of the 336th went with. It’s loud, bright and draws the eye, which echoes the 336th’s tradition of being the first fighters downrange in Korea and in Desert Storm, McCloskey said.

“For the 336th Fighter Squadron, the yellow is perfect because it attracts one’s attention with its brightness and flash, and definitely stands out amongst the blues and reds that tend to be common colors for flying squadrons,” he wrote. “When someone becomes a member of the ‘World Famous,’ yellow becomes a big part of their tenure there, which in turn helps the culture of the Rockets thrive.”

Nowadays, most aircrew in the 336th have a yellow helmet wrap, or at least a decal, McCloskey said. Eagle-eyed readers will spot that the helmets also sport the wearer’s callsign and an image of a cog, which is also rich with symbolism in the squadron. New squadron members who have not received their own callsign are called ‘COG’ plus a number, as in ‘COG 70.’ The term is more than just a placeholder though: it also represents how the squadron works together.

“A cog is defined as ‘a small member of a larger organization or system,’” McCloskey said. “COGs fulfill a number of roles, both in the air and on the ground, and are truly the life-blood of the Rockets.”

Even after the member gets a callsign, there’s a saying: “once a COG, always a COG,” McCloskey said.

“Essentially, it doesn’t matter how experienced an airman becomes, everyone must remember that they are all important players in the greater scheme and mission of the squadron,” he explained. “Just as the 336 FS played a small role in the overall victory against Nazi Germany, the Rockets of today’s Air Force are playing a role in the grand scheme of United States air power.”

Of course, one other cog in the machine is the color yellow, which helps the 336th distinguish itself from the Eagles of the 334th (blue), the Chiefs of the 335th (green) and the Lancers of the 333rd (red) squadron, which first joined the wing in 1957. While other squadrons in other Air Force wings may also be assigned the color yellow, the shade is most strongly associated with the Rocketeers, Jinnette explained.

The 4th Fighter Wing’s colors may inspire a sense of unit pride, but they don’t change the fact that all of its pilots, and every other pilot in the Air Force, are on the same team, fighting the same fight.

“When it comes down to it, we’re all the same disciplined, professional aviators,” Jinnette said. “We’re all friends, so we all flow from one unit to the next. Whichever unit you join, the unit is your family.”