"Airman First Class Erland Injerd was successfully taken into custody yesterday. He will be held in pre-trial confinement, pending trial by courts-martial." 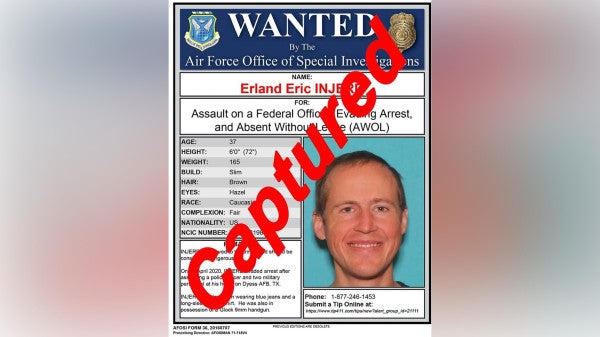 A Texas-based airman who evaded capture for two weeks after allegedly threatening his chain of command and assaulting Air Force military police officers was finally apprehended on Thursday, according to the Air Force Office of Special Investigations.

“Airman First Class Erland Injerd was successfully taken into custody yesterday. He will be held in pre-trial confinement, pending trial by courts-martial,” Air Force OSI tweeted on Friday, along with a mugshot of the 37-year-old Injerd. “We are grateful for the help of the community & our law enforcement partners.”

Though the circumstances of Injerd’s arrest were not available, the details of his alleged assault were revealed in court records last week. According to a criminal complaint, the airman was confronted by security forces at his home at Dyess Air Force Base on April 24 after Injerd sent a threatening email to his chain of command.

Security forces officers Senior Master Sgt. Klexton Q. Jett, Master Sgt. Derek L. Krahn and Officer John F. Breed asked the airman to turn over his personal firearms, but Injerd refused to comply and instead began cursing at the officers, according to the complaint. When the officers tried to bring him under control, Injerd allegedly struck Breed in the face and all four of them wound up on the ground.

“Injerd intentionally poked his finger in Officer Breed’s right eye and struck SMSgt Jett in the knee,” read the complaint. “SMSgt. Jett recently had knee surgery and Injerd was aware of this.”

The airman then ran into his house, broke a back window, crawled out, scaled the base perimeter face and escaped into the woods on the other side. Local police and Air Force defenders with 7th Security Forces squadron searched for Injerd, but the airman evaded capture in the difficult and wooded terrain, police said at the time. Police said at the time that Injerd was considered armed and dangerous.

A Dyess spokeswoman told Task & Purpose last week that the FBI was leading the investigation alongside the U.S. Marshal’s Service and Air Force OSI.