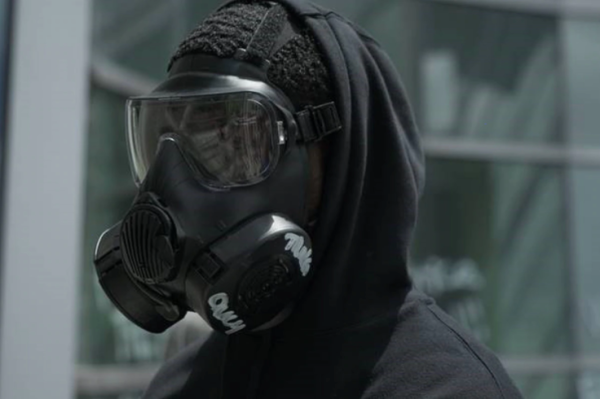 An airman stationed at Hill Air Force Base was charged with destroying government property on Wednesday after the airman was allegedly caught on video setting fire to a Salt Lake City patrol car while wearing a government-issued gas mask during a protest in May.

In a video of the protest, Airman First Class Larry Raynold Williams Jr., 22, can be seen wearing an M50 Joint Service General Protective Mask that the airman had been issued in March for training purposes, the U.S. Attorney’s Office for the District of Utah said in a press release on Wednesday. Investigators used several photographs and a lot number written on the gas canister to identify Williams.

“The lot number for one of the gas canisters assigned to Williams was identical to the number observed on the gas mask as depicted in pictures taken at the riot,” the attorney’s office wrote.

Williams, a security forces gate guard with the 75th Security Forces Squadron, according to Air Force Times, entered active duty on May 7, 2019.

The airman was arrested by members of the FBI’s Joint Terrorism Task Force, two months after Attorney General William Barr pledged to use regional JTTFs to track down ‘violent radical elements’ participating in nationwide protests such as the one Williams participated in.

One legal expert warned that treating American protestors as terrorists and expanding domestic terrorism frameworks could have destructive consequences for civil rights.

“[T]he invocation of terrorism signals to state actors and ordinary people that police protestors are enemies of the state against whom extraordinary violence is acceptable,” wrote Shirin Sinnar, an associate professor law at Stanford Law School, in a commentary piece that was cross-posted on Just Security, the American Constitution Society, and the Stanford Law School blog.

A week before the May 30 protests, Salt Lake City police department body camera footage showed officers firing 34 shots at 22-year-old Bernardo Palacios-Carbajal as he was fleeing police. Though Palacios-Carbajal was armed with a gun at the time, his death coincided with nationwide protests following the police killing of George Floyd.

According to the criminal complaint, video footage from the protest shows a white male, later identified as Christopher Isidro Rojas, 28, standing next to a Black male, later identified as Williams. The airman was dressed in a black Nike hoodie, black Nike sweatpants, black shoes, and a black gas mask as he held up a white fabric material for Rojas to light up with a cigarette lighter, the attorney’s office said.

“Once the fabric began to burn, the complaint alleges Williams threw the material into the window of the overturned patrol car,” the attorney’s office said. “The burning material landed partially within the interior of the patrol car and partially on the street.”

The May 30 protests began peacefully, according to the press release. Later that day, a Salt Lake City police officer knocked down a 67-year-old man named James Tobin, who walks with a cane.

Related: A Marine vet stood in silent protest outside the Utah Capitol so long that his shoes melted

Later that day, protestors surrounded a Salt Lake City police officer driving in her patrol car, forcing her to stop. Fearing her safety, the officer fled the car, which protestors then flipped over, vandalized, looted and set on fire, the press release said.

Investigators have tracked down and charged five people in the vehicle arson case since then, including Rojas and Williams. The airman was arrested at his home Wednesday morning on the arson charge by the FBI and JTTF, the press release said. The Air Force Office of Special Investigations assisted the FBI.

Williams was scheduled to make an initial court appearance on the arson charge at 3 p.m. on Thursday, the press release said. The court public affairs official was not immediately available Friday afternoon to provide an update on the appearance. Arson carries a potential sentence of 20 years in prison with a minimum mandatory five-year sentence.