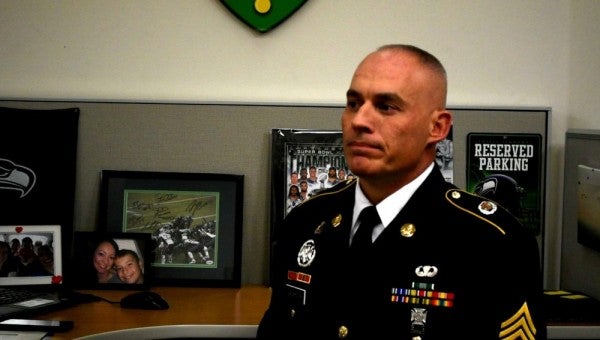 A recruiter with the Herriman U.S. Army Recruiting Station in Salt Lake City, Utah, VanHook had taken his daughter to get her ears pierced at the Fashion Place Mall in nearby Murray on Jan. 13 when an argument between two members of rival gangs escalated into a shootout, according to an Army release.

The sound of gunshots sent hundreds of panicked shoppers running for their lives. But after getting his wife and daughter to safety in a nearby store, VanHook did exactly what so many other public servants do his situation: He ran towards danger.

“My first response was to make sure my family was taken care of,” VanHook said in an Army release. “And then it was just a matter of 'I need to stop this before it gets to my family,' so I took off. I ran towards where I thought the threat was at. While I was running there really were no thoughts other than 'take care of business.'”

After running through the mall in an effort to get a description of the suspected shooters, VanHook immediately turned his attention to casualties. Luckily, the crossfire reportedly left only two bystanders wounded, the Associated Press reported; according to the Army, cell phone video showed VanHook using his belt as a tourniquet for one casualty, directing bystanders to assist him as he moved on to the other.

For his part, VanHook chalked his response up to good training. A nine-year member of the Army Reserve, he had previously served as a civil affairs specialist with the 321st Civil Affairs Brigade before becoming a recruiter, according to the Army. Luckily, he completed the Combat Lifesaver Course in 2014, training he drew upon that fateful day.

“Because of the Army, it instilled something in me to react in danger and not to flee from it,” VanHook said in the release. “”You go over and over it. It's just a matter of muscle memory … There really wasn't thought. It was action.”

According to a local ABC News affiliate, Salt Lake City police have arrested at least five of the suspected gang members present during the shooting.

“It makes me angry,” VanHook said of the incident.”I'm a little angry that something like that happened. It was my daughter's birthday and it kind of messed it up.

WATCH NEXT: Meet The Army Helo Pilot Who Resupplied Hippies At Woodstock