Two U.S. Air Force pilots have been awarded the National Aeronautic Association's Mackay Trophy for “most meritorious flight” of 2017,... 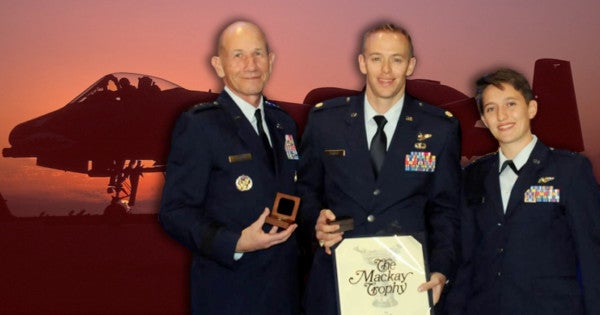 Two U.S. Air Force pilots have been awarded the National Aeronautic Association's Mackay Trophy for “most meritorious flight” of 2017, in recognition of their providing close air support to more than 50 American and Syrian Democratic Forces troops who were pinned down by enemy fire.

On May 2, 2017, A-10 Thunderbolt pilots Maj. Tyler Schultz and Capt. Samantha Harvey were re-tasked to support the group of Americans and their Syrian partners as they tried to fight off the enemy's heavy machine guns, mortars, and RPG fire.

“For over five hours, Captain Harvey and Major Schultz overcame communications degradation, severe thunderstorms, and near-zero visibility, ultimately saving the lives of friendly forces,” according to an NAA press release of the two pilots, operating as Boar 51 flight.

Gen. Mike Holmes, commander of Air Combat Command, said in a post on Facebook that they “came in danger close” and dropped 1,500 pounds of ordnance, and fired 1,300 rounds from the A-10's 30mm cannon.

The NAA said the pilots fired on 19 different targets during the engagement.

It wasn't clear exactly where the engagement took place, but given the use of “danger close,” it's safe to say it was a particularly rough firefight for troops on the ground. Danger close, depending on the type of weapons being fired from the A-10, means the pilots were firing as the enemy was only about 150 to 600 meters away from friendly forces.

Harvey and Schultz were assigned to the 354th Expeditionary Fighter Squadron, 447th Expeditionary Operations Group at Incirlik Air Base in Turkey. They were presented with the award on Nov. 27.