Russia-backed Syrian forces wasted no time in taking advantage of an abrupt U.S. retreat from Syria on Monday, deploying deep inside Kurdish-held territory south of the Turkish frontier less than 24 hours after Washington announced a full withdrawal 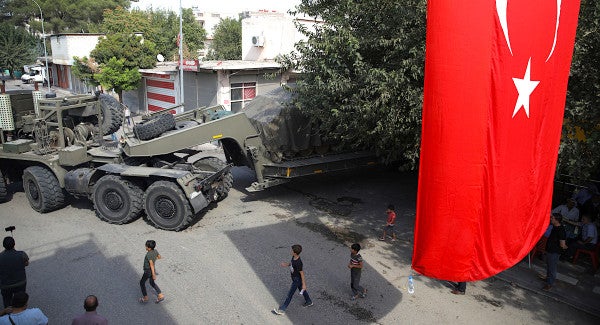 BEIRUT/ANKARA (Reuters) – Russia-backed Syrian forces wasted no time in taking advantage of an abrupt U.S. retreat from Syria on Monday, deploying deep inside Kurdish-held territory south of the Turkish frontier less than 24 hours after Washington announced a full withdrawal.

Washington's former Kurdish allies said they had brought in the Syrian troops as an “emergency measure” to help fend off an assault by Turkey, launched last week with “a green light” from President Donald Trump that the Kurds describe as a betrayal.

The Syrian government began deploying on Monday in a major victory for President Bashar al-Assad and his principal ally Russia, who gained a military foothold across the biggest swathe of the country that had been beyond their grasp.

Under the deal, government forces are poised to move into border areas from the town of Manbij in the west to Derik, 400 km (250 miles) to the east.

Syrian state media reported that troops had entered Tel Tamer, a town on the strategically important M4 highway that runs east-west around 30 km south of the frontier with Turkey.

State TV later showed residents welcoming Syrian forces into the town of Ain Issa, which lies on another part of the highway, hundreds of km (miles) away. An SDF media official said he could not confirm these deployments.

Ain Issa commands the northern approaches to Raqqa, former capital of the Islamic State “caliphate”, which Kurdish fighters recaptured from the militants two years ago in one of the biggest victories of a U.S.-led campaign.

Much of the M4 lies on the southern edge of territory where Turkey aims to set up a “safe zone” inside Syria. Turkey said it had seized part of the highway. An official of the Kurdish-led Syrian Democratic Forces (SDF) said clashes were ongoing.

The swift Syrian government deployments came as the strategy the United States has pursued in Syria for the past five years crumbled overnight. Washington announced on Sunday it was abruptly pulling out its entire force of 1,000 troops which had fought alongside Syrian Kurds against Islamic State since 2014.

A U.S. official said on Monday a diplomatic team working to help stabilize territory captured from Islamic State's self-proclaimed caliphate had already been pulled out.

U.S. troops were still on the ground but early phases of their withdrawal had started, the official said.

Two other U.S. officials have told Reuters the bulk of the U.S. pullout could be completed within days.

Sunday's announcement of the U.S. retreat came just a week after Trump said he would shift a small number of troops out of the way, allowing Turkey to attack the Kurds in what they described as a stab in the back.

Thousands of Kurdish fighters and their allies have died fighting Islamic State in a close partnership with the United States, a strategy the Trump administration had continued after inheriting it from his predecessor Barack Obama.

Trump says he aims to extract the United States from “endless” wars in the Middle East, in keeping with his view that Washington cannot be the world's policeman.

His policy reversal allowed Turkey to launch a cross-border assault last week that sent tens of thousands of civilians fleeing and the Kurds scrambling to find new friends.

“After the Americans abandoned the region and gave the green light for the Turkish attack, we were forced to explore another option, which is talks with Damascus and Moscow to find a way out and thwart these Turkish attacks,” senior Kurdish official Badran Jia Kurd said.

Jia Kurd described the arrangement with Assad's forces as a “preliminary military agreement”, and said political aspects would be discussed later. The Kurds have led an autonomous administration in the area they controlled.

Assad aims to restore his government's authority across all of Syria after more than eight years of civil war.

Another senior Kurdish politician, Aldar Xelil, described the pact with Damascus as “an emergency measure”.

“The priority now is protecting the border's security from the Turkish danger,” Xelil said. “We are in contact with the Damascus government to reach common (ground) in the future.”

The Turkish assault has prompted widespread international criticism and alarm that it could allow Islamic State fighters in Syria to escape Kurdish-run prisons and regroup.

Ankara says its operation aims to neutralize the Kurdish YPG militia – the leading component of the SDF – which it views as a terrorist group because of its links to Kurdish separatists in southeast Turkey.

U.S. Defense Secretary Mike Esper indicated on Sunday that one factor behind the U.S. pullout was that the Kurds aimed to strike a deal with Russia and Syria to counter the Turkish offensive. Hours later, the Kurdish-led administration said it had made such a deal for the Syrian army to deploy.

Turkey says it aims to form a “safe zone” in Syria to settle many of the 3.6 million Syrian refugees it is hosting.

President Tayyip Erdogan said on Sunday that the operation would extend from Kobani in the west to Hasaka in the east, and go some 30 km (20 miles) into Syrian territory, with the town of Ras al Ain now in Turkish control.

Turkey's European allies have criticized the incursion, warning of potential sanctions. Erdogan says that Turkey will “open the gates” to Europe for Syrian refugees if the European Union does not back the offensive.

The fighting has raised Western concerns that the Kurds, holding large swathes of northern Syria previously controlled by Islamic State, would be unable to keep thousands of jihadists in jail and tens of thousands of their family members in camps.

The region's Kurdish-led administration said 785 Islamic State-affiliated foreigners escaped a camp at Ain Issa over the weekend. The British-based war monitor Syrian Observatory for Human Rights, citing sources in the camp, said around 100 people had escaped.

Erdogan dismissed the reports and told the state-run Anadolu news agency that accounts of escapes by Islamic State prisoners were “disinformation” aimed at provoking the West.