An Air Force combat controller earned the service’s second highest award for valor in combat for his actions during an... 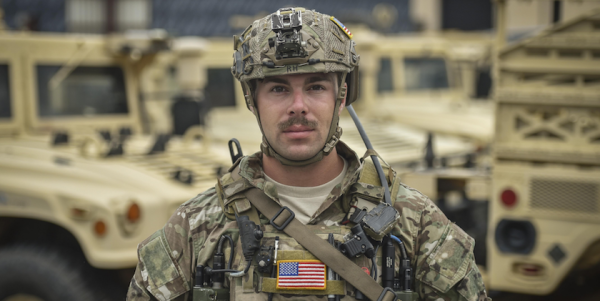 An Air Force combat controller earned the service’s second highest award for valor in combat for his actions during an intense eight-hour battle in northern Afghanistan last November that left dozens dead, the head of Air Force Special Operations Command announced on Sept. 20.

Staff Sgt. Richard Hunter of the 23rd Special Tactics Squadron called in a total of 31 “danger close” strikes from and AC-130U gunship and AH-64 Apache helicopters over the course of the firefight, Lt. Gen. Bradd Webb said Tuesday. Some of those strikes, Webb added, were “13 meters away” from friendly forces.

Hunter’s airstrikes killed a total of 27 enemy fighters. The Air Force Cross is second only to the Medal of Honor.

“It was an extremely heroic mission,” Webb said. “I’m very, very proud of him.”

Hunter — who will be the 11th AFSOC member awarded the Air Force Cross since the start of the War on Terror — was attached to a 12-man Army Special Forces team that was ambushed in Kunduz Province on Nov. 2, 2016.

Hunter’s team and a group of Afghan special forces were maneuvering through the village of Boz Kandahari, a known Taliban safe haven, when insurgents opened up with a combination of machine gun fire and grenades from every direction, trapping the entire outfit in a narrow alleyway.

As the battle got underway and the commandos pushed deeper into the village, Hunter called in airstrikes and returned fire with his weapon. The AC-130 above was armed with a 105mm Howitzer, and the magnitude and proximity of the exploding ordinance shook the village, covering the commandos with dirt and making it difficult to see.

“If white had a taste — that’s what was” like, Hunter later said of one 105mm round that detonated about 10 meters from his team. “It was super-loud, super-bright, super-violent immediately.”

Once the AC-130 ran out of 105mm, the Apaches followed with a barrage of Hellfire missiles.

According to an account of the firefight published on the AFSOC website, “smoke from the battle became so thick that the team maneuvered blindly through the village under Hunter’s aircraft-aided direction.” At that point, the ground force commander was mortally wounded, and Hunter is credited with braving enemy in an attempt to protect him.

Two American soldiers were killed, while four more were injured. Three Afghan troops died in the fight and 11 others were wounded, according to Military Times.

The incident sparked widespread scrutiny after reports of heavy civilian casualties emerged. A military investigation later determined that 33 Afghan civilians were also killed in Boz Kandahari that day. Officials concluded that U.S. forces had acted in self-defense and were cleared of wrongdoing.

“Picture this: A group of about 50 people, with 50 percent of them attrited to injuries, and half of them not able to walk,” Hunter told Air Force Times. “So what are the other half doing? Dragging, carrying bodies. That’s what we were doing with them as we were bounding up this alleyway.”