While the Marines have confirmed they will test the Army’s new handgun, the XM17, it seems they are actually eyeing... 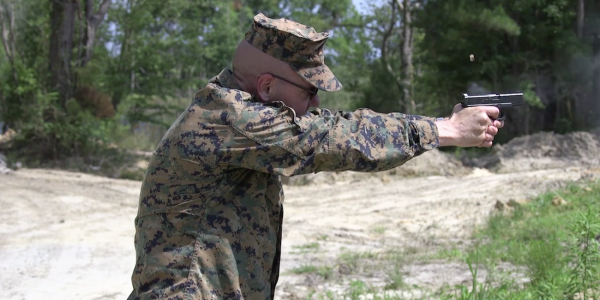 While the Marines have confirmed they will test the Army’s new handgun, the XM17, it seems they are actually eyeing a more compact pistol to send downrange.

“We prefer our pistol be as compact as possible without loss of capability … after all, it’s a pistol,” Chief Warrant Officer 5 Christian Wade said recently in an interview with Marine Corps Times. “As soon as the U.S. Army is ready to sell them to us, we will begin this program.”

This explains the Corps’ interest in the Army’s new XM18 pistol, a compact version of the XM17. It seems possible that the Marines will bypass the full-size XM17 duty pistol all together. The Corps has also been testing out the Glock 19M, which Wade hopes will make its way to Marines in Afghanistan. The 2nd Marine Division’s top firearms expert posted a video in August comparing the Beretta M9 and Glock 19.

“I’m going to do a drill where I fire three magazines as quickly as my arthritic hands can fire them,” Wade said in the video. “No specific drill or discipline to this, if anything I just want to show you this pistol can fight.”

Wade also explained that he and other members of the Marine Corps Systems Command are working “on a requirement for a concealed carry handgun using the Glock 19M, a variant of handgun already used by some Marines.”

Wade just might get his wish. Last week, the Firearm Blog pointed out that Marine Corps’ Systems Command had gone forward and ordered at least 400 Glock 19M pistols back in May.

Then, on Friday, Wade posted a Facebook update that the Glock 19M was one step closer to being authorized for service in Afghanistan after obtaining a “second general officer signature this morning on an urgent requirements document.” He added that one more signature is needed “before the document goes to CD&I; for rapid issue and work-up training.”

The Marine Corps Times speculated that the XM18 will enter service in the mid-2020s. In the meantime, it appears the Corps is happy to use the tried and tested compact Glock.