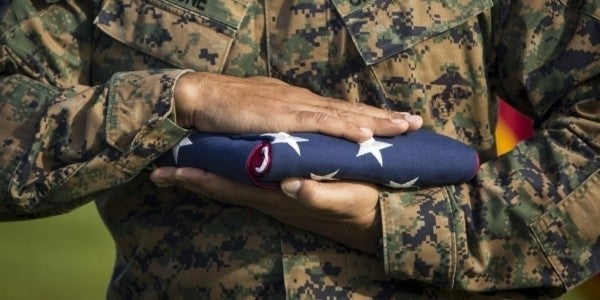 A Marine based in Washington, D.C., has been charged with murder, negligent homicide, involuntary homicide, and other offenses for allegedly killing another Marine by jokingly pointing his pistol at him and pulling the trigger, according to a charge sheet provided to Task & Purpose.

The incident happened on Jan. 1 at Marine Barracks Washington. Lance Cpl. Riley S. Kuznia was shot around 5 a.m., and pronounced dead nearly an hour later at a local hospital.

Lance Cpl. Andrew Johnson is accused of shooting Kuznia in the head, according to a redacted copy of his charge sheet, which the Marine Corps provided to Task & Purpose on Thursday. Johnson faces numerous charges in connection with the shooting and other incidents leading up to it.

By pointing his pistol at Kuznia and pulling the trigger, Johnson allegedly showed “wanton disregard for human life” despite knowing full well that “death or great bodily harm was a probable consequence of his inherently dangerous act,” the charge sheet says.

Johnson is also charged with dereliction of duty for failing to follow firearm handling procedures on four separate occasions, according to the charge sheet.

The day before the shooting, he allegedly took his pistol from his holster, chambered a round and said: “Oh, you're going to a party. F**k this s**t.” He is also accused of taking his pistol out of his holster while dancing, improperly clearing his pistol in an undesignated area without a supervisor present, and using his personal cell phone while standing duty.

An Article 32 hearing for Johnson is scheduled for Aug. 22 in Quantico, Virginia, Marine Barracks Washington announced in a news release on Thursday.

“A complete and thorough investigation was conducted following this tragic incident,” Col. Donald Tomich, commanding officer for the base, said in the news release. “We initiated immediate actions within Guard Company to ensure proper policies and procedures are maintained and strictly followed.”

“The Barracks remains committed to supporting Lance Cpl. Kuznia's family as the legal process will undoubtedly reopen some wounds,” Tomich continued. “Time does not ease the pain of their loss or make dealing with this any easier for them, and our thoughts and prayers remain with them. They are a part of the Marine Barracks Washington Family.”

UPDATE: This story was updated on Aug. 1 with a statement from Col. Donald Tomich, commanding officer for Marine Barracks Washington.