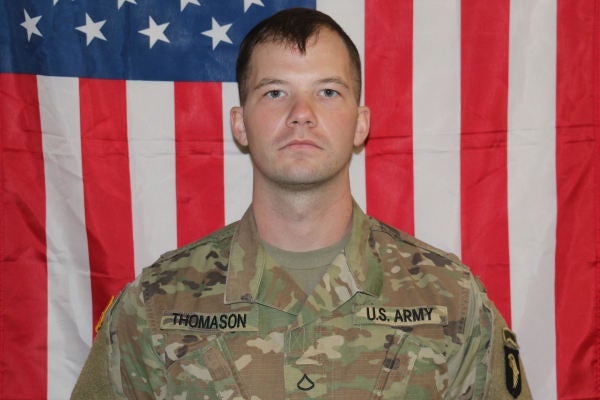 An Army specialist will be court-martialed over allegations he accidentally killed a fellow soldier while deployed to Syria in 2019, Task & Purpose has learned.

Spc. Jesse Spyker, 20, was referred to court-martial on Feb. 21 on charges of involuntary manslaughter, negligent homicide, reckless endangerment, and dereliction of duty, according to an Army spokesman. The charges stem from the death of Pfc. Michael Thomason, who died in Kobani, Syria on April 29, 2019 in a non-combat incident.

Additionally, Sgt. Chance Siefert has been charged with five counts of dereliction of duty, while Sgt. Timothy Tompkins was charged with four counts of the same crime. “Neither soldier's case has been referred to trial by the general court-martial convening authority,” said Lt. Col. Charles Barrett, spokesman for the 101st Airborne Division (Air Assault).

Spyker was arraigned on Feb. 28, although a trial date has not been set, said Barrett, who added that “the accused is presumed innocent until proven guilty.”

Spyker did not respond to a request for comment.

Thomason, a 28-year-old infantryman from Lincoln Park, Michigan, enlisted in the Army on Dec. 2017. At the time of his death, he was assigned to 2nd Battalion, 327th Infantry Regiment, 1st Brigade Combat Team, 101st Airborne Division (Air Assault) and on his first deployment.

Thomason was promoted to private first class in Dec. 2018. His awards and decorations include the Army Commendation Medal (with “C” device for combat service), Global War on Terrorism Service Medal, and Inherent Resolve Campaign Medal.

“He lived a warrior's life, and he died in the service of his country. Michael's memory will live on as part of the legacy of the 101st Airborne Division, as will our commitment to his family and to our mission.”