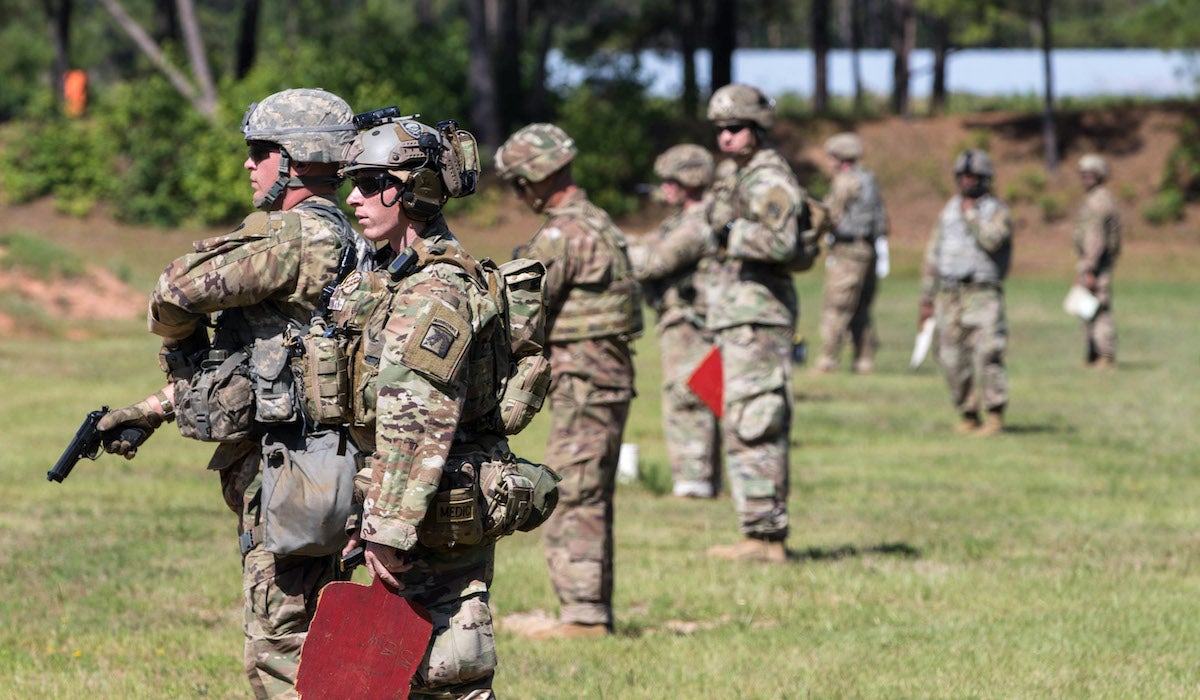 The Army is about to apply one soldier’s idea for how to better manage range time to the entire 18th Airborne Corps.

Maj. Evan Adams with the 101st Airborne Division is the first-ever winner of the 18th Airborne Corps’ Innovation Challenge, a ‘Shark Tank’-style competition which asked soldiers to submit their ideas for how to improve range and training area management.

Adams’ idea was to develop a mobile phone app, called RangeFinder, which will allow soldiers to more easily schedule and manage range operations.

“[It’s] basically an application to schedule ranges, cancel ranges, push notifications for openings of ranges, communicate across post between units, and it can even serve as an emergency dispatch or an emergency evacuation coordination tool,” Adams told Task & Purpose this week.

Adams, who studied graphic design in college at Sam Houston State University, said there’s almost always “a graphic interface system that you can use to make things easier” — and the Army is no different.

The app he presented to the panel on Tuesday represents a user-friendly way to organize all of the different platforms soldiers use into one system “in the user’s pocket.”

A press release from the 18th Airborne Corps called Adams’ idea “a game-changing piece of technology” and said implementation would begin next week.

Most of their ideas were similar in that they were attempting to cut down on wasted range time and maximize availability for units to train.

Wagner — who studied engineering, and is clearly comfortable with numbers — told Task & Purpose there are “multiple inefficiencies with the current range and cancellation process” that “build up to something very troubling.”

“What that means, when you cross-reference this with data for weather and maintenance cancellations, that’s essentially one-third of all scheduled days were no-shows,” he explained.

Adams’ app will hopefully address that by using push notifications and reminders to notify soldiers when another unit cancels their range time.

Two of the incentives for the competition was four days off, and the ability to go to a school of the winner’s choice. Adams said that because of the novel coronavirus (COVID-19), he doesn’t expect to do anything too crazy with his four days off, stating that “I would say this is where I go to Disney World.”

Instead, he plans to use it to catch up on time with his family that he lost to work on his idea and presentation.

And as for the school, it may not be one you’d expect.

“One of the schools I’ve been wanting to go to — and it’s really nerdy, I know — is the Capabilities Developerment Course,” Adams said, explaining that it could help give him insights on how best to implement RangeFinder, as well as any future ideas.

“Everyone’s always asking, ‘Why not something else?’ And you know, after jumping out of airplanes a couple of times, I’ve had my thrills, I’m good,” Adams laughed.

Adams will also receive a Meritorious Service Medal and “a media trip to New York City next week,” the press release says, as well as “bragging rights and the pride of seeing his innovation applied across” the 18th Airborne Corps.

The next innovation competition starts on Nov. 17, the press release said, and Adams’ advice to soldiers who may want to throw their ideas in the mix is to not be worried about speaking out and taking ownership of their Army.

“Don’t be a barrier to your own success, or even the Army’s success,” Adams said. “We kind of all own making this a better organization.”