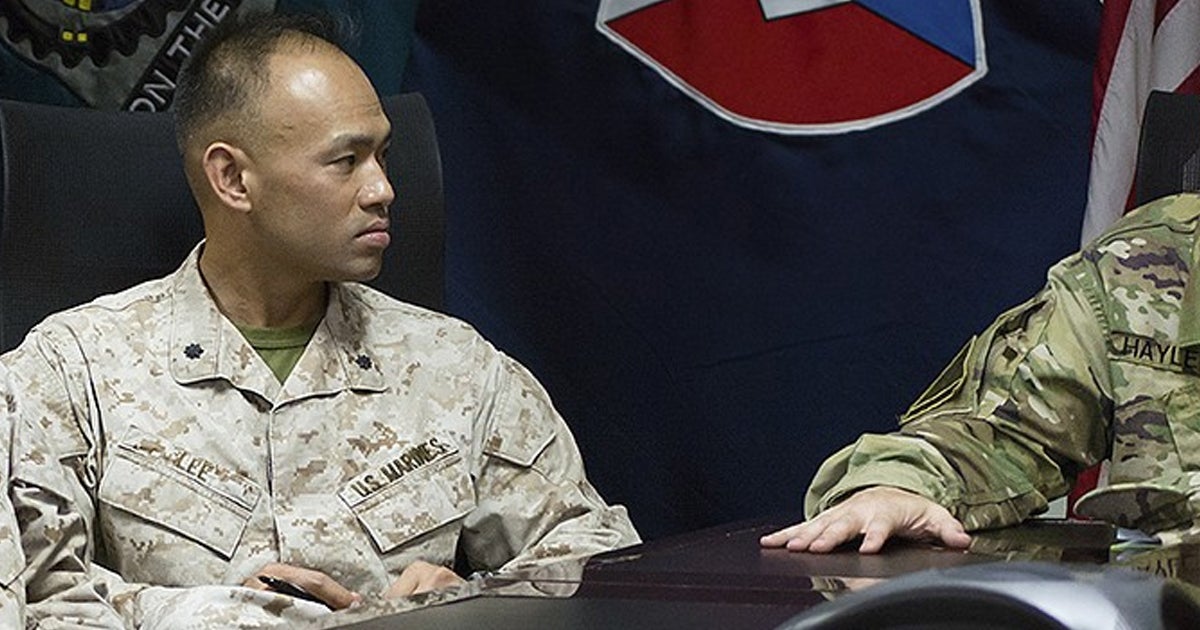 A Marine lieutenant colonel received no punishment after being convicted at a special court-martial in September of stealing hundreds of dollars in merchandise from the post exchange in Camp Humphreys, South Korea, court records say.

Lt. Col. Samuel K. Lee, 47, was convicted of larceny on Sept. 11 at Camp Foster, Japan, according to the Marine Corps’s most recent report on court-martial dispositions.

The report noted that “consistent with the plea agreement, the military judge did not impose punishment.”

Under military law, U.S. service members can face hefty fines, up to one year of confinement, and dismissal from the service if convicted of larceny. But since Lee appeared before a special court-martial, the judge did not have the power to sentence him to confinement or dismissal.

“A no punishment deal. I’ve never heard of anything like that for an officer at a special court-martial,” said Rob ‘Butch’ Bracknell, a former Marine judge advocate who retired as a lieutenant colonel after 22 years of service.

Lee, a logistics officer assigned to Marine Forces Korea, was charged and convicted on two specifications of violating Article 121 of the Uniform Code of Military Justice, which derived from the larceny of non-military property valued at $1,000 or less sometime between Nov. 1, 2019 and March 8, 2020, Marine officials said, citing the charge sheet.

According to Lee’s charge sheet, he was found guilty of stealing the following items:

Lee, a lieutenant colonel with more than 23 years of service, earns nearly $10,000 in basic pay per month, according to military pay scales.

Marine officials declined to provide a career biography for Lee, but a monthly unit newsletter from Sept. 2016 noted that he was serving at the time as the commanding officer of Combat Logistics Battalion 5 during a deployment to the Middle East.

Lee was selected for promotion to colonel in Nov. 2019 but later removed from the promotion list in March 2020, according to military and congressional records.

Capt. Joseph Butterfield, a Marine Corps spokesman, declined to comment specifically on Lee but said that when officers’ nominations for promotion are withheld due to administrative or legal issues, the Navy Secretary must decide whether they will advance to the next rank.

Butterfield told Task & Purpose that each case is different and sentencing takes into account the impact of the crime on the victim and a unit’s discipline and morale, a Marine’s performance history, and any extenuating or mitigating circumstances.

“The convening authority may enter into an agreement with an accused concerning the disposition of the charges and specifications and the sentence that may be imposed,” Butterfield said. “The decision to enter into a plea agreement is heavily reliant on the accused’s willingness to cooperate in an investigation, the nature of the offenses, and the accused’s willingness to assume responsibility for the conduct.”

Nevertheless, Marines far junior in rank convicted this year under similar circumstances were not as fortunate.

Service members below the rank of sergeant, a mid-level enlisted grade, typically make less than $3,000 in basic pay per month.

Additionally, at a Jan. 28 general court-martial of a gunnery sergeant convicted of larceny at Camp Foster, Japan, a judge meted out a reduction in rank to staff sergeant, total forfeiture of all pay and allowances, and 60 days imprisonment, according to the January court-martial report.

And a private first class fared even worse after being convicted of larceny at a special court-martial in August. The Marine was demoted to private, sentenced to four months in prison, forfeited more than half pay over four months, and was given a bad-conduct discharge — three weeks before Lee got off scot-free for a similar offense.

Lee did not respond to a request for comment from Task & Purpose.