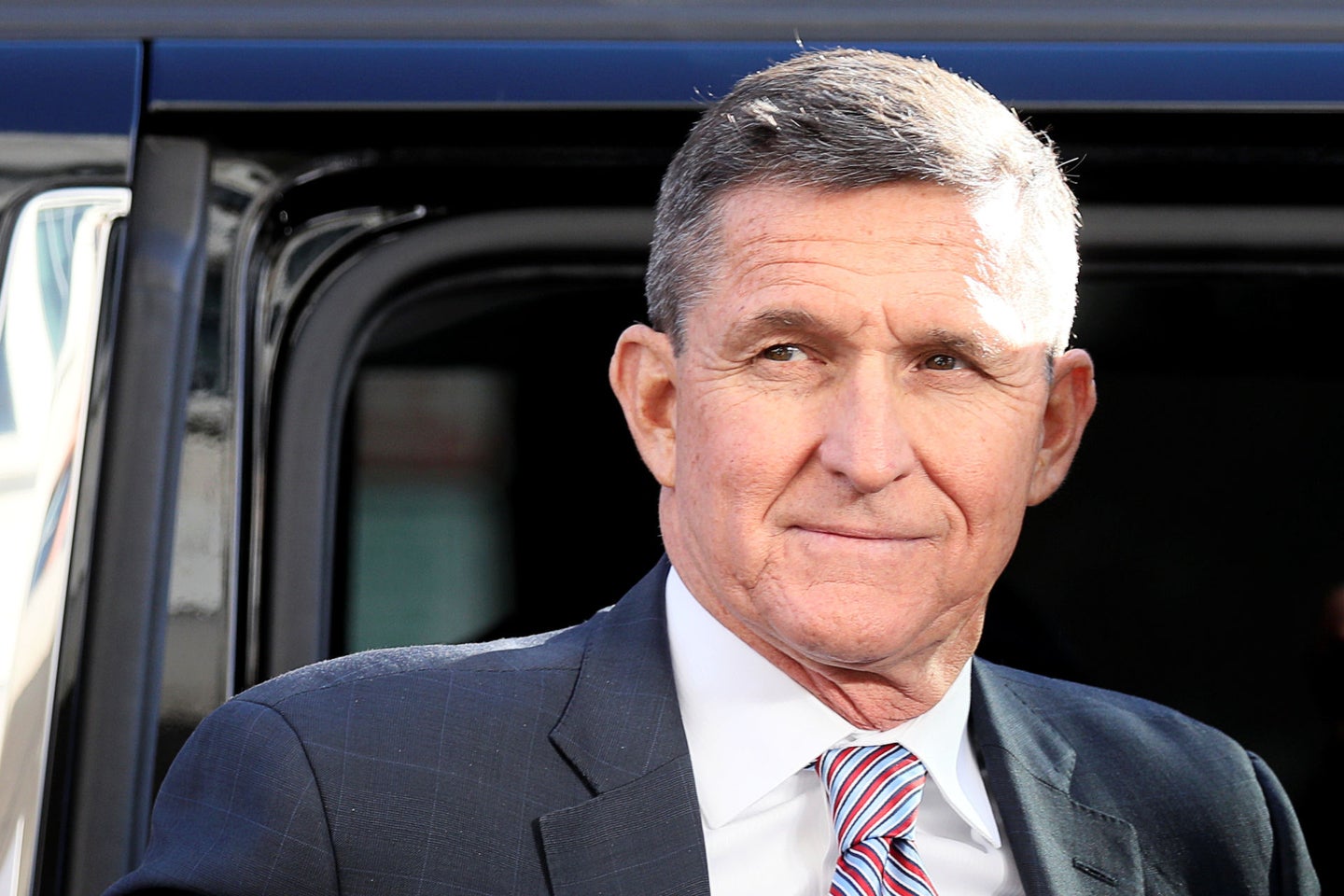 It does not appear that retired Army Lt. Gen. Michael Flynn will face A Few Good Men-style confrontation in a military courtroom for apparently advocating the overthrow of the United States government.

Myanmar’s military arrested the country’s democratically elected civilian leader Aung San Suu Kyi in February as part of a coup. Suu Kyi had just been re-elected by a large margin at the polls, but military leaders alleged that the elections were tainted by voter fraud.

While speaking at an event on Sunday attended by QAnon supporters, Flynn was asked by a man claiming to be a Marine why the political situation in Myanmar “can’t happen here.”

“No reason, I mean, it should happen here,” said Flynn, whom Trump pardoned in November for lying to the FBI during former Special Counsel Robert Mueller’s investigation into Russian interference in the 2016 presidential election. “No reason. That’s right.”

Then on Monday, a message from Flynn’s Parler account claimed that he had not actually advocated having the U.S. military depose President Joe Biden, according to CNN.

“Let me be VERY CLEAR – There is NO reason whatsoever for any coup in America, and I do not and have not at any time called for any action of that sort,” the message reportedly said.

However, Army Lt. Col. Yevgeny Vindman — whose twin brother Lt. Col. Alexander Vindman testified about Trump’s conversation with Ukraine’s president during Trump’s impeachment inquiry — argues that Flynn should be prosecuted under the Uniform Code of Military Justice for his comments on Sunday.

“With these seditious remarks Comrade Flynn may have crossed the line for recall to active duty and court-martial,” Yevgeny Vindman tweeted on Monday. “As a JAG [Judge Advocate General’s Corps] I’m qualified and also happy to prosecute this case.”

Richard W. Painter, who served as associate counsel to former President George W. Bush, told CNN that Flynn has repeatedly called for the military takeover the United States and he should be prosecuted for sedition under the Uniform Code of Military Justice.

It is possible to recall retired service members to active duty in order to court-martial them, although a retired sailor is arguing before the Court of Appeals for the Armed Forces that his conviction after being called back to active duty is unconstitutional. But that measure does not appear to be under consideration right now for Flynn.

When Task & Purpose asked on Tuesday if the Defense Department would court-martial Flynn for treason, Pentagon spokesman John Kirby said, “I know of no such plans to do so.”

“Without speaking to this specific case: Retired officers can be brought back on to active duty to face disciplinary charges if it’s warranted,” Kirby continued. “It’s very, very rare and, again, I’m not aware of any effort or interest in doing it in this case.”

While Trump and his supporters claim the Democrats cheated in the 2020 presidential election, Trump’s former Attorney General William Barr said in December there is no evidence of widespread voter fraud and Trump’s former director of the Cybersecurity and Infrastructure Security Agency called the election “the most secure in U.S. history.”

Still, New York Times reporter Maggie Haberman tweeted on Tuesday that Trump has been telling people he expects to be reinstated as president by August.

His most recent comments aside, Flynn reportedly attended a December White House meeting that included a discussion of using the military to overturn the election, according to Axios and the New York Times. The retired general officer also appeared that month on the far-right news channel Newsmax to argue that Trump should “take military capabilities” to re-run the elections in swing states.

“These people out there talking about martial law like it’s something that we’ve never done. Martial law has been instituted 64 — 64 — times,” Flynn said during his Dec. 17 appearance. “So, I’m not calling for that, we have a Constitutional process … that has to be followed.”