The Military Justice Improvement Act Ensures Justice, Despite What Its Critics Say

Pentagon brass and their status quo supporters have engaged in a misinformation campaign claiming that New York Sen. Kirsten Gillibrand’s... 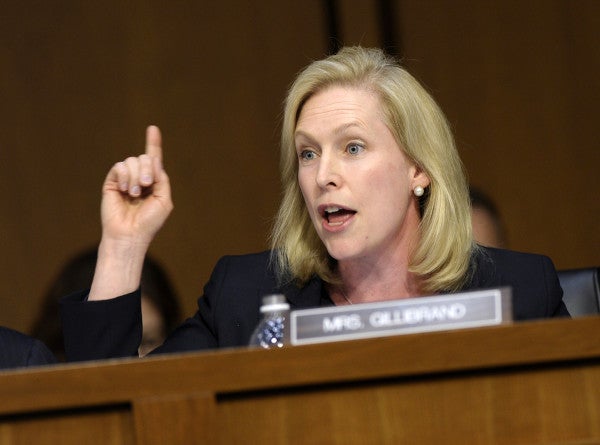 Pentagon brass and their status quo supporters have engaged in a misinformation campaign claiming that New York Sen. Kirsten Gillibrand’s Military Justice Improvement Act is unnecessary and will in fact be counterproductive. A recent editorial in the Daily Signal by Charles Stimson of the Heritage Foundation is the most recent example of this effort.

Stimson’s essay argues against Gillibrand’s proposed legislation on four levels. He first claims that there is no need for change due to improved numbers. Next he argues that the military justice system is unique and should not be changed. His third contention is that under the Military Justice Improvement Act, fewer offenders will be prosecuted, and finally he claims the reform will hurt commanders’ ability to protect victims. He is wrong in all four of his assertions.

Sexual assault still an epidemic in the military

The 2014 RAND survey estimates that there were 20,300 active-duty members in 2014 who were the victims of sexual assault; the majority of whom were assaulted at least twice, suggesting there were over 47,000 assaults against service members in 2014 alone. While the sexual assault rate is down from 2012, it is virtually unchanged from 2010. In other words, after four years, the military has shown no improvement. These numbers are even more startling when you consider it does not include the thousands of civilian employees, spouses, children, and members of local communities and foreigners abroad who were sexually assaulted by military members.

The Department of Defense also claims that survivors have increased confidence in the current commander-driven justice system and that one in four victims are reporting their offenses. This is misleading at best. The DoD is taking credit for the almost 1,500 survivors who reported only in a restricted manner. In other words, these survivors have not reported the crime in a way that can be investigated or prosecuted. In fact, the number of survivors who have elected to report restricted has doubled in the last two years — a clear sign they do not have confidence. The real report rate (an actionable report) is about 15%. Thus, 85% of survivors do not have enough faith in the system to openly report the crime.

The RAND survey also found troubling revelations from survivors who did not report their assaults. One in three respondents said they did not trust that the process would be fair and impartial; victims believed reporting would hurt their career, or did not think anything would be done if they reported the crime. One in four also did not report because they feared retaliation from their chain of command or coworkers. Increasing confidence in the system is the key to an increase in reports, and increase in reports is the key to accountability and stopping sexual assault.

Stimson claims that military justice is different in that is not solely based on holding criminals accountable; rather, quoting a Heritage report written by himself, he argues that “our military justice system exists in order to help the military to succeed in its mission: to defend the nation. … Ultimately, it is structured to fight and win wars.”

This red herring argument fails on this fundamental level because the Uniform Code of Military Justice is a criminal justice process containing a code of criminal procedure on specified offenses such as rape, murder and theft. These are crimes that transcend good order and discipline issues to crimes that affect society at large. There is no legitimate argument that the military must be able to treat rapists and murders as a discipline issue rather than a criminal issue. To argue so is to diminish the seriousness of the crime. It is time to stop sacrificing justice for survivors at the altar of good order and discipline. The reality is that good order and discipline is undermined when criminals are allowed to act with impunity and not held accountable for their crimes.

Commanders are not tougher on crime

Stimson also trots out the tired old myth that commanders are routinely sending cases to court against military prosecutors’ advice. The genesis of the myth appears to be a letter the DoD provided to the Senate Armed Services Committee in 2013. The letter claimed that in the past two years there were 93 instances that a convening authority referred a case to court-martial after a civilian prosecutor refused to prosecute the case. This assertion was conflated by senators aligned with the Pentagon who claim that convening authorities are tougher than military prosecutors. The narrative has thus been pushed that fewer cases will go to trial under Gillibrand’s proposed act because commanders will send weak cases to trial that risk-averse prosecutors would decline. Stimson conflates this false narrative with his argument that convening authorities are unencumbered by pesky ethics rules that keep prosecutors from taking cases to trial.

Despite repeated requests from Protect Our Defenders, the DoD has failed to prove there were in fact 93 cases that a local prosecutor refused to pursue that convening authorities sent to trial. For example, the Navy responded to our request on Oct. 8, 2013, saying they “do not maintain a system of records including 120 cases charged by civilians, reasons for civilian law enforcement's declination, or the military's request for civilians to charges.” In other words, the numbers appear to be little more than guesswork passed off as fact.

While it is a common refrain that commanders are tougher than judge advocates, there appears to be no evidence of convening authorities sending cases to trial contrary to their legal advice. This is understandable for a number of reasons. In order for a convening authority to send a case to a general court-martial, he must first receive advice pursuant to Article 34(b)(2) of the Uniform Code of Military Justice (UCMJ) that the charges are warranted by the evidence. Without such advice, the case cannot proceed to trial.

Finally, Stimson makes the bizarre argument that justice is better served because lawyers are guided by a cannon of ethics while commanders are not. In fact, he argues cases are now going to trial where “there is not evidence of a crime.” If true, this should be a horrifying thought and not be considered a strength of the convening authority system. To the extent that anyone would think this is good, it needs to be soundly rejected. If convening authorities are indeed sending cases unsupported by the evidence and contrary to their legal advice to trial, that fact alone should result in immediate reform.

As to his correct assertion that convening authorities are not bound by ethical standards, this is just another reason why it is better to have an independent and professional prosecutor making these weighty decisions. One huge concern should be the very fact that convening authorities are not bound by ethics rules. I do not see that in any way as a positive. Military prosecutors have a code of ethics to ensure justice is administered fairly and impartially. For example, a military judge could be forced to recuse himself from a case due to his relationship with a witness, accused or victim. The same is true for a prosecutor, but there is no similar requirement for convening authorities.

The Military Justice Improvement Act only affects the approximately 2.7% of commanders who have general court-martial convening authority. Those who oppose the legislation have intentionally conflated “command authority” with “convening authority.” The act, if passed, only affects the ability to refer felony-level, non-military offenses to trial. The reform is actually very modest and would only affect the very few commanders who are general court-martial convening authorities, and only their power to refer cases. Every other authority a commander currently has would be unchanged and for over 97% of commanders there will be no change in their authority. To be clear, the proposed reform does not fire every commander or any commander contrary to opposition hyperbole.

However, retaliation rates show commanders are failing to protect victims now. Sixty-two percent of victims are suffering retaliation, and the recent Human Rights Watch report proves the retaliation is severe and pervasive. It should be no surprise that according to the RAND survey, 45% of survivors were dissatisfied or very dissatisfied with their treatment by their chain of command after reporting their assault. This reflects an utter failure in leadership. Moreover, one in five active-duty women were sexually harassed last year, and over 60% of the time, it was by someone in their chain of command.

Regardless of commanders’ almost complete failure to protect victims now, they do have the full ability to protect victims if they chose. The Military Justice Improvement Act leaves unchanged a commander’s ability to order an offender into pretrial confinement, to restrict an offender’s movements, to move an offender out of a work area, to stop abuse and retaliation of coworkers, to issue a military protective order to keep an offender from contacting or threatening a victim, and to ensure a victim is receiving the support she or he needs. By empowering military prosecutors, this bill is the answer to protecting victims, not the cause of the current failure.

In the end, Stimson regurgitates the same failed arguments that have led to the crises we now have. It is time to ensure all military members, whether victim or accused, have access to a fair and impartial justice system equal to that of the American citizens they protect.