A Look At Military Spending Under The Obama Administration

Between the rise of the Islamic State, Russia’s proxy war in Ukraine, and tensions in the South China Sea, national... 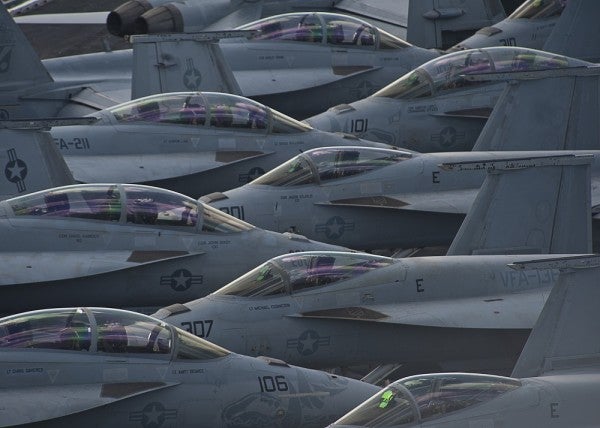 Between the rise of the Islamic State, Russia’s proxy war in Ukraine, and tensions in the South China Sea, national security and military spending is shaping up to be a key issue in the 2016 presidential election.

On Dec. 15, PolitiFact published a fact sheet answering five common questions concerning military spending. The article, written by Louis Jacobson and Amy Sherman, looks at the state of the defense budget, America’s nuclear arsenal, Navy fleet size, Army manpower cuts, and equipment, and ranks the accuracy of statements made by leading Republican presidential candidates and the Obama administration in these areas.

National security spending includes the Pentagon’s budget as well as spending by other agencies, like the Department of Energy’s work on nuclear weapons. On the whole, spending increased in 2010 and 2011, but decreased every year for four straight years by a cumulative 15%, write Jacobson and Sherman.

The reason for this is two-fold. The Obama administration's decision to begin withdrawing troops from Iraq and Afghanistan caused defense spending to drop. The second reason has to do with sequestration, which refers to the automatic across-the-board cuts to both military and nonmilitary spending that was originally designed to force bipartisan negotiations in Congress. It didn’t work and when negotiators failed to strike a deal in 2011 the cuts went into effect in 2013.

The Army had roughly 570,000 soldiers in 2012, but reductions over the years have reduced that size to roughly 490,000. The Army announced in July that it intends to cut its force size down by an additional 40,000 soldiers by fiscal year 2018. The cuts are expected to save roughly $7 billion.

The U.S. Navy’s fleet size peaked during World War II when it had 6,768 ships under its command. Afterward, the number dwindled to where it is today, with 272 active ships.

The Navy’s goal is to expand its fleet size to 308 ships. Given the current shipbuilding schedule, that goal won’t be met until 2022, and it depends heavily on repealing sequestration.

The Navy is constructing 12 ballistic missile submarines to replace the current force of 14. The Navy allotted $1.4 billion for research and development in 2016, but the total cost will be around $103 billion.

The Pentagon’s plan to acquire 2,443 F-35 joint strike fighters over the next 20 years is the largest procurement of its kind and will cost nearly $400 billion.

In October, the Air Force awarded a contract for a new long-range strike bomber. The cost is estimated at $550 million per aircraft for the first 21 out of 100.

The state of the U.S. nuclear arsenal

While the U.S. has reduced the number of its warheads, the government is in the process of modernizing its equipment.

Obama has cut the number of nuclear weapons by a smaller percentage than any other American president since the Cold War ended, according to an analysis by Hans Kristensen, director of the Nuclear Information Project at the Federation of American Scientists.

Over the last six years, Obama has cut the nuclear arsenal by 10%, which trails his predecessor, George W. Bush, who cut the number of nukes by 50%.