In life, Adolf Hitler was many things: a failed painter, decorated soldier, Germany’s “last hope,” and eventual mass murderer of... 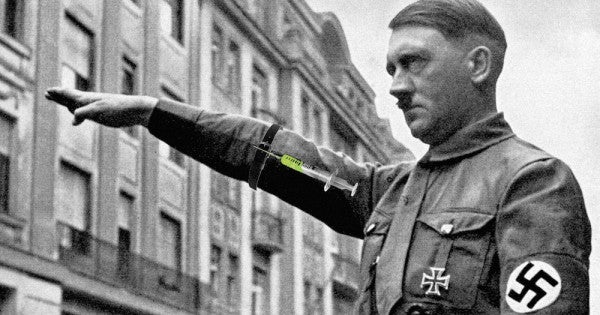 In life, Adolf Hitler was many things: a failed painter, decorated soldier, Germany’s “last hope,” and eventual mass murderer of more than six million Jews. But, according to one author, he was also a “gibbering super junkie.”

It turns out that throughout World War II, Hitler was a drug addict, according to award-winning German writer Norman Ohler, author of “Blitzed: Drugs in Nazi Germany,” due to be released on Oct. 6.

Hitler was known to be a hypochondriac, but Ohler’s book also says he was heavily into a heroin-like substance called Eukodol.

And he suggested that the decision to invade Russia in 1941 was a direct result of his addiction. The move caused many to consider Hitler “virtually insane for taking such a risk,” according to the Huffington Post. His erratic military tactics and poor decisions in the Battle of the Bulge only added to those perceptions of insanity.

Ohler told the BBC Radio 4 that Hitler “had turned to steroids and hormone products like liver extracts of pigs, stuff like that, pretty unsavoury things got into his veins.”

The book claims that throughout the entire last year of World War II, Hitler was essentially high out of his mind on upwards of 70 different drugs, including crystal meth, bull semen, and other opiates.

Ohler suggests that the deterioration of Hitler as a leader in 1944 is a direct result of his prolonged drug abuse.

His struggle came to a head during the Battle of Berlin in April 1945, when Hitler ordered raids to find whatever drugs they might be able to salvage from the pharmacies in the war-torn town center. But when that effort failed and his supply dwindled, Hitler committed suicide.

The Independent reported that the book, which contains journal excerpts from Hitler’s physician Dr. Theo Morell, says that his body was “ravaged” by drug abuse.

At one point, Hitler is cited as saying, “I cancelled injections today, to give the previous puncture holes a chance to heal. Left inside elbow good, right still has red dots (but not pustules), where injections were given.”

During that BBC Radio 4 interview, well-known World War II historian Anthony Beever applauded Ohler’s book, adding, “All of these elements show how [Hitler] was really no longer in control of himself, but he was still in control of the German armies.”