What started as a joke turned into a major artifact discovery when Klaus Kristiansen had a little fun with his... 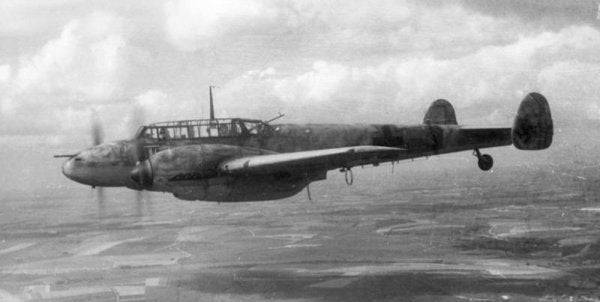 What started as a joke turned into a major artifact discovery when Klaus Kristiansen had a little fun with his son’s history class project.

“When my son Daniel was recently given homework about World War II, I jokingly told him to go out and find the plane that is supposed to have crashed out in the field,” Klaus told Danish news station DR P4 Nordjylland on March 7.

The Kristiansen family owns a farm in Aabybro, Denmark, where a plane supposedly crashed during the war. Kristiansen believed the aircraft had been recovered, but thought he and Daniel might still be able to unearth a scrap or two.

So they took out a metal detector and began to search. But they found a lot more than just a scrap. The pair unearthed the plane… along with the remains of the pilot who had flown it. It was a German Messerschmitt ME 109, complete with Luftwaffe munitions.

“In the first moment, it was not a plane,” Kristiansen told BBC. “It was maybe 2,000 to 5,000 pieces of a plane. And we found a motor … then suddenly we found parts of bones, and parts from clothes.”’

When Kristiansen realized the magnitude of what they had found, he contacted the Danish authorities. Local police closed down the site because of the live ammunition, while forensic analysts are hoping to identify the pilot.

The family has dwelled in the same spot for generations. Kristiansen himself said that he had lived on the farm for 40 years without knowing if there was any truth behind the plane-crash story, or if there was any chance it was on his property, although his grandfather had mentioned it. He never thought anything of it as there were no obvious signs on the land.

“He was telling a lot of stories, my grandfather,” he said. “Some of them were not true, and some of them were true — but this one was true. Maybe I should have listened to him a bit more when he was alive!”